Does Your Dog REALLY Want to Be Petted? 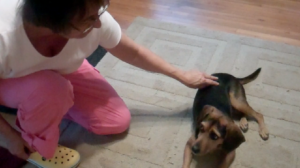 Newsflash. Not all dogs want to be petted. But you wouldn’t know it from watching videos on YouTube.

What you can learn on YouTube is that there are lots of dogs whose owners “think” they are enjoying petting. But they aren’t. This is another one of those disconnects between dog and people language. People who clearly adore their dogs – and whose dogs love them – post videos of said dogs saying in every polite way they know how that they would like the human to STOP.

And in all of the millions of videos on YouTube, I haven’t found one that plainly explains a way to tell if a dog enjoys petting. Since this is Dog/Human Communication 101, I took a stab at it.

I made a video that demonstrates a “Consent Test” for petting. A Consent Test is a way to tell if a dog likes something. It’s very simple. If you cause the activity to stop, does the dog take action to make it start again?

I didn’t invent this, of course. Jean Donaldson describes this technique in Oh Behave (actually with humping, to see if the humpee minds). Many trainers use it as a way to tell whether rough or one-sided looking dog play is enjoyable for the smaller or less assertive dog. You remove the stronger/more active/suspected bully dog from the situation and see whether the other dog tries to re-initiate play with him or her. If you were unsure about both dogs, you could try the test each way.

Some people learn about it in a formal way, and some people just intuit it as a way to understand the communication of a non-verbal animal. It’s one of those things that seems obvious to do after you hear about it or figure it out.

In the video I show the petting consent test with two of my dogs. Zani says, “No” to more petting. Summer says, “Yes.” I go over some basic body language that supports their answers. Here are the results:

Below is a short list of body language indicators, yea or nay, for petting. Of course all of them vary with individual dogs, and context is very important. These are generally accepted observations but not set in stone.

Signals that Could Go Either Way

In the case of these more ambiguous signals, you need to look for other indications from your dog. In fact, look at the context for all of the signals. Next time you see a dog yawn, you may think, “Oh no, stress!” And miss the fact that the dog just turned three circles in a bed and lay down.

Addendum: I created a follow-up post with more examples of dogs (my own and others’) enjoying petting: Dogs Who Like to be Petted or Touched.

Training a Dog to Enjoy Petting or Handling

Petting is a not essential to life with a dog. But a certain amount of handling is necessary for the health of the dog. A dog can learn to enjoy both handling and petting through the use of classical conditioning. A dog taught to accept handling will be much less stressed at vet visits, for example. That’s a topic for another day; I just wanted to mention that dogs’ preferences (just like humans’) are not set in stone.

I wish some more folks would publish some videos about petting dogs. I know that in the grand scheme of things there are many worse things that happen to dogs in the world than forced attention. But this is a microcosm of many of the bigger problems. Think how many dogs could have happier lives if their people didn’t misunderstand their reactions. It’s such a simple thing.

I searched for videos on YouTube of dogs enjoying petting and got some pretty horrifying results. I found only one video on the first page when I searched “dog enjoys petting” that actually showed a dog who appeared to be enjoying himself, and re-initiated contact when his owner stopped.

So let’s make videos. If your dog likes petting, show the world what that looks like. Or perhaps you have some old footage of your dog reacting with dislike to some aspect of handling that you wouldn’t mind posting and labeling. I already have a new video in the works with Clara, who is not very subtle about her preferences. It’ll be good for a chuckle.

Doggonesafe.com: How to Love Your Dog –  Believe it or Not. This little gem describes ways to ask the dog’s consent, encourages getting to know one’s dog’s language, and suggests ways that humans and dogs can be physically close to each other without intimidating or “over-touching” the dog. The whole website has great stuff about learning to read dogs and keeping kids safe around them.

Dogs Like Kids They Feel Safe With. This is a wonderful movie about teaching dogs with a clicker and teaching children with TAGteach with the goal of comfortable and safe interaction between the two. Children who are fearful and children who tend to overdo with animals are both included. The children are taught about asking the adult handler’s and the dog’s consent.

Dr. Sophia Yin has a wealth of information on dog body language, polite greeting behavior (from humans), and low stress handling. Here is a page with a load of information. Free Downloads: Posters, Handouts, and More.

Family Paws is another great site that focuses on safe interactions between dogs and their human family members, with special emphasis on education for expecting families and families with infants. Here is founder Jennifer Shryock doing a great analysis of a now infamous human/dog petting session gone wrong, with nice explanations of the mismatch between dog and human communication and expectations.

Synopsis of the Video

To do the petting Consent Test I suggest settling down with the dog when she is relaxed, in a space in which she can leave. Not leashed up, and not blocked into a corner or onto furniture. I suggest petting the dog, perhaps starting on her chest, then stopping to see what she does.

I demonstrate this with Zani, who just stares at me when I stop. I then show the whole clip, which shows her throwing clusters of stress signals, including lip licks, head turns, whole body turns away, and shrinking away from my hand. She says, “No” to more petting a dozen different ways. All her signs are very fleeting though, so I show some freeze frames to help us humans see what she is doing.

I contrast this with some footage of Summer, whose eyes are half shut with a look of bliss on her face, as she repeatedly walks back into my hand when I move it away. Summer says, “Yes, please!” to more petting.

It’s interesting with my dogs because Zani is very sociable and loves most people and dogs, and Summer is very retiring and generally needs a lot of personal space. Yet she tends to welcome low key petting, while it just makes Zani nervous.

Although I didn’t have treats in the area, after I finished filming with Zani I gave her some spray cheese for being such a good sport. She could have left, but chose to stick around. Probably it’s because I had the camera running and she kept thinking we would have a training session.