Dog Speak: The Language of Barking 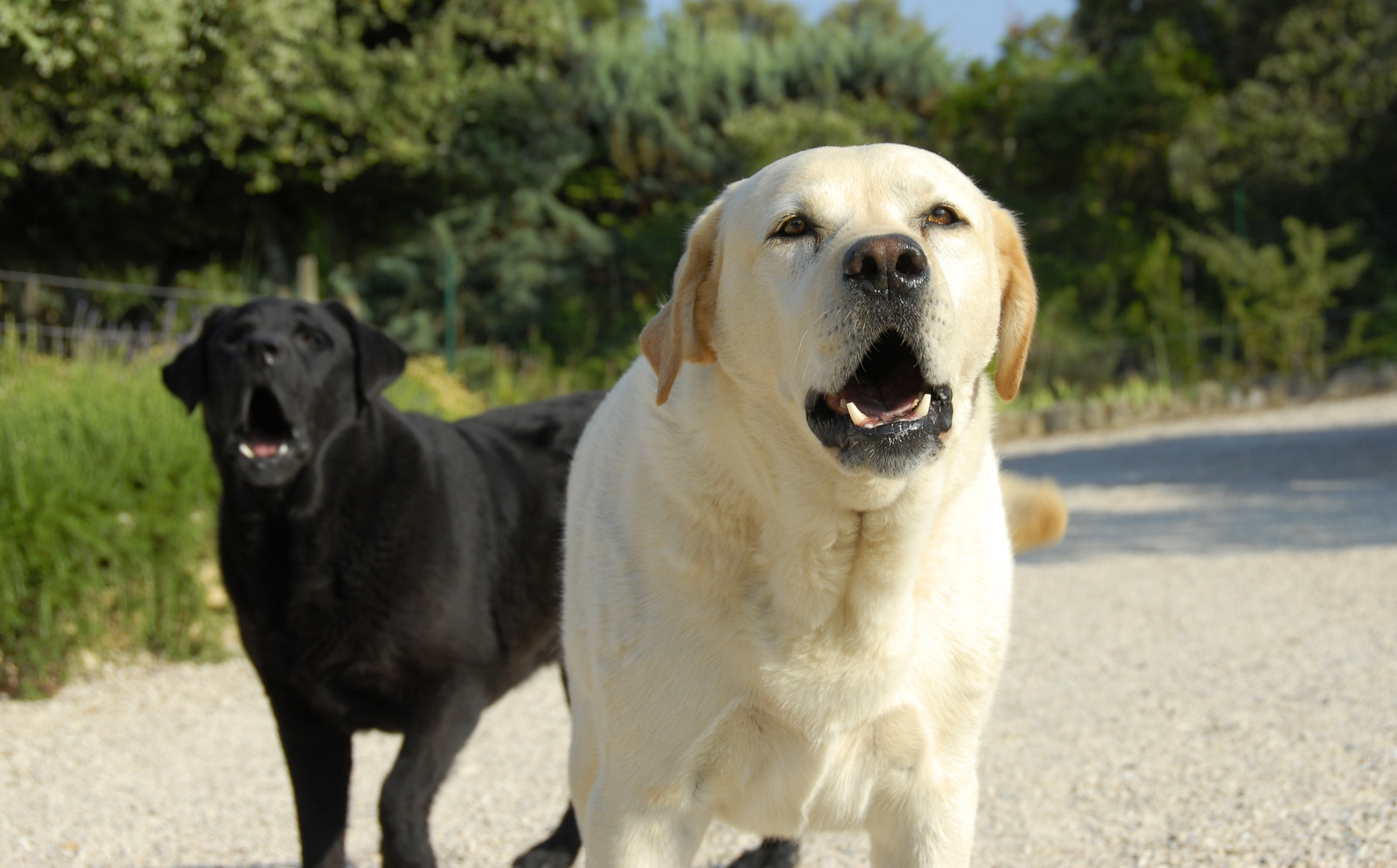 We can all think of people who talk too much yet no one asks, “How can I get my friend to stop talking?” The question would not even enter our minds and nor would any of the other questions stated above. We may find our talkative friends entertaining, informative and filled with life and if we don’t like it, then we can simply walk away, “unfriend” them or decide simply to tolerate them.

Dogs, on the other hand, do not speak our language. Sometimes it can be hard to understand what they are saying, which may make their behavior become annoying. Imagine, however, how frustrating it must be to the dog not to be heard, or worse, ignored.

Fact: Barking communication has a very clear progression and purpose. It starts abruptly between two and four weeks of age, with most puppies showing a response as if they are startled by their first bark.

Initially, barking occurs in a play-soliciting context and is not associated with serious aggression until after eight weeks of age, when puppies will respond to their dam’s growl. Aggressive barks by puppies generally do not occur before 12 weeks. By the fourth month, the aggressive bark is more marked in defense of food and toward strange dogs, probably more as an announcement of presence rather than a warning.

This announcement of presence continues and can become stronger and more persistent, especially in areas where many strange dogs and people pass by. Defense of food is also natural, referred to as resource guarding by humans. These two communication pieces are quite ingrained and natural early in life and needed for survival.

Since dogs are domesticated they need to figure out how to exist in a human world that does not always welcome barking.
Coppinger, Lord & Feinstein state that barking is a universally recognized hallmark of the domestic dog, Canis lupus familiaris. From the casual human listener’s standpoint, barking seems readily distinguishable from other vocalizations.

There is a lot of speculation and ongoing study on the communication of dogs. Barking is a foreign language for which we have no interpreter, like trying to understand a code only known by its originator. The tone of continuous, incessant barking can be irritating for the people those dogs live with. It can be established then that excessive barking is a communication problem.

Fact: Excessive barking is one of the top five reported behavior problems, comprising between 6 – 35 percent of all complaints to canine behavior consultants. Over-barking can cause over-excitement, which can cause high level stress and other behavior issues (Campbell, 1973; 1986).

1) Inside a vehicle – can be serious face plastering type.
2) Places where there are a lot of dogs barking, such as flyball, dog shows, agility.
3) Barking at dogs on television.

A simple solution would be to stop reinforcing excessive barking. There is much more involved in teaching the dog what you want instead and rewarding the right behavior, while still keeping communication alive.

Understand that excessive barking can cause both physical and mental stress. It is not in the best interest of the dog, in most cases. Keeping barking manageable would be a better option.

The bottom line is dogs bark, it their communication system. Excessive barking goes beyond normal alerting, greeting or protecting resources. It is then it becomes annoying and urgent. No one is listening and it can even become the only activity the dog has in his world.

These behaviors can have many reasons for being reinforced including anxiety, social deficits, over-arousal, being intermittently rewarded with attention, separation distress and more. These learned habits need to be re-associated with incompatible behaviors, while retaining barking as communication.

How to Work with Problem Barkers

Develop a communication system to teach what else to do or an off cue (the ‘Three Bark Rule,’ which I use with my dogs and client dogs on home base, will be explained in detail in Part II of this article in the March 2016 issue of BARKS). Anything we do not understand can be an annoyance, but once we know what to do and how to do it, we open the bridge to communication. Meanwhile, here are five tips on managing and preventing excessive barking:

Why? Enrichment takes the focus off the outer environment and places it on the inner environment while keeping the dog busy with what they love to do from foraging, to toy play, to mentally tiring activity.

What? Treat dispensing toys, intelligence or puzzle games, a variety of toys that make sounds, toys that have differing textures, chews to release mouth tension, active games such as flirt poles, balls, toys that jump, move automatically and more. The key is in providing variety and rotating what is offered daily.

Dr. Ian Dunbar and Dr. John Watson have developed a clever system of rewarding quiet, the Auto Trainer. The unit uses tones to train dogs to be calm using positive techniques (no shock, spray or loud sounds). A collar detects dog barking and when the dog is quiet, the reward system goes into effect. The device then rewards increasingly longer periods of quiet so it becomes more rewarding not to bark than to bark excessively. It can be used at home, in the car or while traveling.

Putting a Dog’s Unwanted Behavior on Stimulus Control, a video by positive trainer Donna Hill, demonstrates this concept. Putting unwanted behavior on cue means eventually the dog will not engage in it unless he is cued to do so. It becomes a cued trick versus an annoying behavior. A clicker is a wonderful tool to use to accomplish precision in teaching. You can learn the basics in this video, Clicker Training Basics, with Pamela Johnson. Another way to put barking on cue is to teach “speak.” Here are four how-to steps using a clicker and rewards the dog loves:

4) Management of Over-Barking in a Car or Other Vehicle

A dog barking means something good is going to happen. This can be initiated to the visual of a dog also, and can start with using barking sounds found on sound DVDs or sound tracks on the internet. Trainer Eileen Anderson features a useful video, Conditioning a Positive Response to Another Dog Barking and to Other Distractions, on how to condition a positive response to other dogs barking on her YouTube channel.

Identifying why barking is occurring, applying the correct technique to address the underlying reason and developing a mutual communication through listening and proper responsiveness are key to making sure barking does not become over-excessive and simply remains as manageable dog speak, the language of the dog that dogs can count on their pet guardian to understand, thereby creating confidence, improved relationships and bonding in a positive way.