Dog Tired? When Exercise Wakes him Up Rather than Tires Him Out! 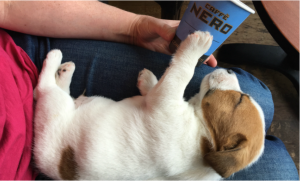 Many years ago, at a seminar in Edinburgh, I heard Patricia McConnell say that most dog walks wake the dog up, rather than tire the dog out. ‘But why is he not tired?’ I’m often asked. ‘I’ve taken him for a really long walk.’

We’re just back from a 10km walk followed by a sandwich in the sun. A good brisk march with plenty of variation from sniffing and fetching, meeting and greeting dogs and even swimming. Despite this apparent morning of stimulation, after we arrived home, Jellybean immediately tried to engage me in play. When that didn’t work, he went and got his stag bar, which he’s been chomping on for about 10 minutes. I know that quite soon he will crash and sleep for hours.

Exercise, excitement and stimulation cause hormones to be released into our system. The same can be said for our dogs. These hormones have an effect on behaviour and take time to wear off. Following a long, exciting and occasionally over-stimulating walk, dogs can often be wound up. This may cause them to make choices when they return home which owners find difficult to explain. They can’t settle, there’s too much going on. Post-walk “mischief” is a common occurrence and one which is reported to me by owners regularly. Thinking their dog needs more stimulation, owners play some more, engage some more. All in an effort to tire them out more.

Setting post-walk routines which include a low stimulus settle zone (pen, crate or quiet room) combined with a chew toy (stuffed Kong, Stag Bar, Yaker chew, stuffed Buffalo horn, Coffee Wood chew or Anco Root) helps your dog settle and relax. Chewing is a natural self-soothing mechanism for most dogs. Jellybean went to find his Stag Bar because this is the routine I’ve taught since he was young. He knows it helps him settle down, even when the excitement hormones are still flowing. Chewing causes gastric juices to flow and gastric juices help stem the flow of adrenalin, the ‘buzz’ hormone which so often stops our dogs and us from relaxing.

Next time you find yourself asking ‘why isn’t he tired?’ ask again if you can help facilitate an environment where it’s easier for your dog to settle and relax, then set this as your post-walk routine.