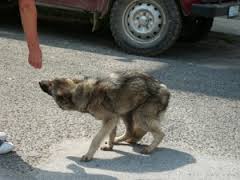 This dog’s fear is manifested through body language

As Patricia McConnell says in a blog on her website: Why Dogs are More Afraid of Men, “people in the training and behavior field know that almost all shy dogs are more afraid of men than women, even if men have been nothing but kind to them their entire lives. We’ve always speculated that it had something to do with the way men walked (more assertively?) or their bigger chests, larger jaws, and/or deeper voices. But we’ve never really known for sure what it was – perhaps it is related to scent: obviously men smell different than woman, and it could be that just ‘maleness’ is more intimidating.”

Regarding the way men walk, McConnell refers to research published in Current Biology that  asked volunteers to guess the direction of motion of figures that were represented only by points of light placed at critical joints. Apparently, ‘masculine gaits’ look like they are coming closer whilst ‘feminine gaits’ appear to be retreating.

So, “if the critical points of men are seen as coming closer at higher rates or stronger intensity than women, no wonder dogs are more afraid of males than females. Fearful dogs are ALWAYS more afraid of something coming at them than they are at approaching something themselves,” says McConnell.

The other day I went to a very interesting case of a dog who, though uneasy with men in general, was particularly scared of her new owner – a gentle, calm and loving man. She was worst of all when he was moving about.

We considered his gait, how he might smell, his tone of voice, and even whether because he was so smiley his teeth may appear to be threatening to the dog, but although unable to get to the bottom of why, we considered what could be done to help them both. 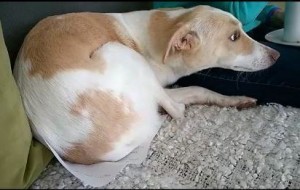 Tilly is fearful of her male owner

Here is the story of Tilly:

She was a stray dog found on the streets in Greece along with a male dog who now also has a new home. She is one year old.

Tilly is a remarkably stable dog in all respects bar one – she is still, after four months of living with the couple, very wary of the gentleman of the house. This is despite the man doing nearly everything for Tilly because the lady is often away for a week at a time for her work.

Tilly is worst of all when the man is standing up or walking about. It is tempting to guess at what may have happened to her earlier at the hands of a man, perhaps the dog-catcher on the streets in Greece. Apparently the male dog Tilly was found with is even worse.

Sitting on the sofa with the lady, I watched as the man walked around the room. Tilly made sure she had the kitchen table between her and him, her eyes darting, her tail between her legs, licking her lips.

When he sat down at the other end of the L-shaped sofa, Tilly jumped straight up too but as far away from him as she could, between the lady and myself. Here was his dog, snuggling up to me and kissing my nose, whereas if he himself so much as changed his position on the other end of the sofa she shrank back into the seat and it made me feel bad for him. Here is a very short video of Tilly when he moved:

The dear man feels so very hurt. He is the sweetest, gentlest of men and I’m sure he wouldn’t mind my saying that he’s not a macho type. He has tried so hard with her. The fact that their other two little dogs enjoy his cuddles doesn’t seem to help Tilly at all. He really does adore her, but I feel his efforts to make her accept him are the crux of the stalemate they have now reached. He needs to start behaving in a way that doesn’t come naturally to him – with some indifference. I sensed that all the effort he makes is, in a way, driving her away. There is too much pressure upon on her (I have had personal experience of this when I took on my German Shepherd, Milly).

Weirdly, off leash when out on walks with lots of space, Tilly is a different dog, running about and playing, and (mostly) coming back to him when called. At home though, before they can leave, she runs away before cowering in a corner as he approaches to put collar and lead on her. Again, it is easy to wonder whether it was a dog-catcher that caused her problems with men because the lady has no problems at all.

Once her collar and leash are on, he gives makes a fuss of her – but I did point out to him that at this stage the attention was in effect a punishment to her. It can be hard for a loving human to see this from the dog’s point of view.

I am certain that playing harder to get is the answer and to release her of all obligation to come to him or to be touched by him, certainly never cornering her. Easing off all the pressure by acting indifferently is one half of the plan for desensitization. The other is counter-conditioning. She will now only be fed dog food at meal times and the special stuff – chicken – will be used for ‘man’ work.

Starting at a level she could tolerate, each time the man moved and Tilly looked at him, we said a quiet ‘yes’ and fed her. We gradually upped the ante until he stood up and sat down again, all the time feeding her. When he walked around it became too much for her – she ran off to the other side of the kitchen table. Now while he walks about, as obviously he must, he will either silently throw food to her as he passes or drop it behind him as he walks, encouraging her to follow him rather than to run away.

If he can manage to resist words and eye contact, she will slowly relax I’m sure. He will become a walking ‘chicken dispenser’! In time she will associate him only with good stuff. If he resists approaching her in any way for long enough, the time will come when she actively invites his attention, and even then he should still hold back! To value his attention, she needs to have to work for it (rather than, as she probably now feels, it being forced upon her). Tilly needs to learn that coming over to the gentleman doesn’t result in something that is (to her at the moment) punishing.

I am sure, if he takes things sufficiently slowly and resists showering her with demonstrative love until she is well and truly ready, all will be well eventually. It’s a question of building up her trust.

A week has gone by and I have just called the gentleman.  As he speaks to me, Tilly is sitting beside him on the sofa with her head on his lap! She still hangs back when he is standing up, but no more cowering. I warned him to keep holding back at this delicate stage in the process – not to get too excited, to let her put in some work for his affection.

Great proof that, along with food, the ‘slowly slowly catchy monkey’ approach is working.

For my website and further stories of dogs I have visited, please go to www.dogidog.co.uk