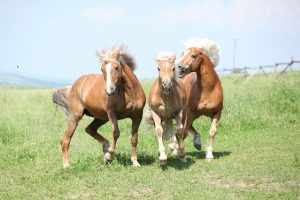 In 21st century horse keeping, we require a range of behaviors from our horses. Some of these involve the horse staying near us and not leaving, such as grooming, tacking up, leading, waiting to have a head collar, halter or bridle put on, not moving away when we climb on their backs, walking next to us when led, not moving away when we ask them to lift their feet, when we use clippers, give injections, and administer medications.

At the same time, we have a whole range of behaviors where we expect the horse to move away from us and stay away. These include lunging, loose schooling and not crowding us when we’re in their stable or paddock. We also expect horses to follow us in certain situations, e.g. walking into an enclosure like a pen, a stable or a trailer/float/truck, walking through gates and gaps, or walking past other horses.

Although we may think we are, we are not necessarily always completely methodical when we train these behaviors. For example, we train leading, but are often surprised when a horse tries to move away from us when asked to walk with us through more challenging environments.

We train a horse to stay close and not move away when we clean his hooves and groom him, but then we may be displeased when he stays close and won’t move away during lunging.

We may also tend to attach labels to our horses’ failure to perform as we expect they should, without necessarily having the insight to label it “poor training.” Instead, we might make it an attribute of the horse herself, e.g. “she is disrespectful,” “she is bargy or baulky,” “she is dominant,” etc.

This is a very human trait – undesirable things done by others are often attributed to something inherent in them, but when we do the same thing ourselves, it’s a completely different situation.

A common argument is that if a horse “respects” us, acknowledges us as their ”leader,” or is properly “submissive,” he will automatically defer to us in the way that we believe he would defer to another horse. This makes systematic training much less necessary. In such a case, all we have to do is become the horse’s leader, the one who moves their feet, i.e. the “dominant” or “alpha” herd member.

Once that happens, all the behaviors we find desirable will automatically happen without the need for training. Or will they?

To continue the analogy, we may then consider the failure to perform any of the behaviors listed above either as an attempt by the horse to “dominate” us or to “disrespect” our perceived authority. If she fails in a “proximity” behavior – for example, moving away from the mounting block, pulling hooves away when being shod or trimmed, running away when we approach with a halter, attempting to bite when the girth is done up, refusing to load or pulling away from us during leading – we might say she is testing us to discover whether she is more “dominant” or that she has no respect for our authority.

Again, if a horse fails in a “distance” behavior, such as running at us when we are loose schooling him, falling in on the lunge, bucking and kicking out at us when we’re in his paddock, crowding us in his stable, we may say he is testing us, lacking in respect, or trying to dominate us.

Expectations
In the modern world of horse keeping, many of us have an additional class of behavior requirements in that we want our horse to like, love or care for us. We may attribute soulful properties to him along the lines of him being able to sense our emotions or thoughts and/or unite with us in a spiritual sense.

Yet again, however, if he fails to demonstrate these attachment behaviors in a way that is desirable to us, we may see it as a way of testing our leadership, or simply treating us as the submissive partner in the relationship. We may say things like, “He only has to work an hour a day,” “He’s stubborn,” or “He’s so ungrateful,” etc.

If we see a horse kick out or strike out at another horse, we say he’s dominant. We observe that other horses tend to stay a safe distance from the kickers and chasers, and not try to take their food, and so we think this means the other horses respect them.

It’s a short jump for us to conclude that the kickers, chasers and biters are the leaders. They are the bosses of the other horses, and bosses are leaders, because bosses decide what everybody else should do and they insist on prompt obedience to requests, backed up with threats and followed up with aggressive action.

The problem with these types of conclusions is that they only provide a snapshot of horse behavior. This often occurs in situations where the horses are not members of a family group and are not in a natural environment.

Add to that the fact that, as observers, we have a tendency to see what confirms our beliefs and to either miss things that don’t agree, or explain them away using sometimes contradictory statements, aka confirmation bias (Nickerson, 1998).

In fact, then, our conclusions, while seeming accurate to us, don’t actually match with the science that describes how animals behave in herds and why horses behave the way they do. The conclusions of science are based on the study of many thousands of horses in different settings and over decades, taking into account all the behavior rather than choosing behaviors that support what the observer wants to believe.

This article was first published in BARKS from the Guild, September 2020, pp.48-49. For more great content on all things animal behavior and training, you can sign up for a lifetime, free of charge, subscription to the digital edition of BARKS from the Guild. If you are already a subscriber, you can view the issue here.

About the Author
Dorothy Heffernan is a Scotland, U.K.-based psychologist who applies her knowledge of learning, cognition and neuroscience to help horse owners improve their horses’ lives through a changed approach to management, training and environment. She uses a force-free approach to training and enjoys making science fun and relatable. Since 2013, she has written the blog Horses Under Our Skin to help people understand why their horses behave the way they do. She is an endorsed trainer of the World Bitless Association and helps horse owners transition to bitless riding using positive reinforcement techniques. In addition, she works with horse, pony and donkey guardians using an evidence-based approach to resolve behavior issues from handling, riding, transporting and husbandry problems. She has been a chartered member of the British Psychological Society for nearly 20 years.