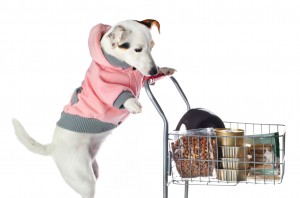 The other day I was not able to get out to buy groceries, so I asked a friend if he’d mind picking up some items for me. I handed him a list which looked something like this:

So my wonderful friend came back with a bag of potato chips, apples, chocolate bar, eggs, whole milk and hamburger buns. I told him I didn’t like any of those things either. Well he was a little upset, but being the sweet, loyal friend, he went back to the store and brought back chocolate chip cookies, oranges, popcorn, hot dogs, brie cheese, and vegetable burgers. Now I was getting upset. What didn’t he understand about my shopping request?

Okay, so in the real world of communication between humans who speak the same language, my friend would have looked at the absurd list and asked the obvious question, “What do you want me to buy?”  Too bad our dogs can’t ask questions because when it comes to behaviors, we give them similar vague lists like this:

Don’t do the following:

Jump up on people

Potty in the house

Bark at the mailman

Pull on your leash

Left to their own devices, a dog will “buy” a lot of enjoyable behaviors (that humans consider undesirable); this is similar to turning a kid loose in a grocery store, where he’s likely to run down the snack aisle and toss all the candy, chips and cookies into the shopping cart! So instead of playing the guessing game with your dog, here are a few helpful tips to play the training game.

So remember the next time you’re tempted to yell something off of your “Don’t buy” list, try your “Do buy”  list instead. Not only is it much clearer, but if it’s his only choice, then he’s going to bring something you want and maybe even surprise you with a desirable behavior he picked out by himself!

To learn more about canine behavior, dog training and so much more, head to Tampa, Florida on November 11-13, 2015 for the Pet Professional Guild’s inaugural educational convention, the Force-Free Summit – Reaching for a Higher Standard.