Don’t Stop That Behavior, Quit It! 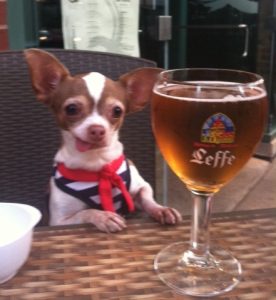 In my “previous life” when I was a fitness and wellness trainer, I would coach my clients to making healthy choices. I learned back then about motivation, about what it takes to set a goal, but more importantly, I learned which goals are the kinds that will stick for the long haul and which are doomed from the start. It helped me empathize with my clients, as I used to be a smoker. Sure I had stopped many times by following a plan and then when I felt particularly stressed or anxious I’d start up again, but when I actually quit smoking, my emotions were very different because this time I not only followed a plan, but I found ways to change my stress levels.

Whenever I see someone trying to force their fearful, anxious or agitated dog to do something, I often think of my smoking days and what that would have been like, if I had signed up for the  “We’ll make you stop smoking plan”. Picture the plan like this: Light up a cigarette, and the “coach” punches you in the face. After a few punches, you’d probably stop the behavior, at least around the coach, but there could be fallout behaviors such that you’d be afraid to smoke in front of your coach, or that you just might retaliate and punch the coach right back! Unfortunately in this plan, the desire to smoke is still strong because the emotions surrounding the behavior have not changed.

I see these “plans” all the time when someone’s highly emotionally charged dog is reacting to something in the environment (usually another dog) and the handler, implements the “I’m going to make you friendly towards other dogs, plan” by doing something unpleasant to the dog.

Sometimes the dog stops the behavior in the moment, but sometimes he shows tremendous fear of the person who threatened him or he becomes even more agitated. The one thing I can promise you is that the dog didn’t quit this behavior! For that to happen, the dog would have to change his fearful or agitated emotions, and I assure you that no amount of threatening behavior from the handler, be it yelling, pushing, jerking or shocking the dog can accomplish that!

So the next time you see someone’s dog being threatened for barking at you, your dog or something in the environment that “concerns” him, think of some of the behavior modification plans you may have tried to help you overcome an issue, and then think of how different the experience would have been if, for example, someone used the “We’ll make you stop drinking, plan” by pushing you off the bar stool every time you’d reach for your beer!

For our dogs to be successful, the goal should not be for them to stop the behavior, it should be for them to quit. They’ll quit when they no longer are feeling stressed because their emotions have changed.