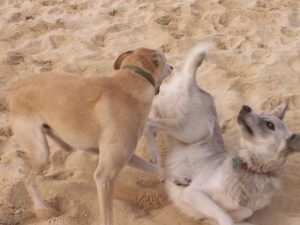 Dominance in dogs is scientifically proven to be a myth

When was the last time you heard “my dog is dominant” or “my dog is trying to be dominant with (fill in the blank)” or “my dog doesn’t see me as the dominant one”? Dominance in dogs is scientifically proven to be a myth. The AVSAB (American Veterinary Society of Animal Behavior) in its concern for the resurgence of dominance theory issued a position statement.  By definition the state of being dominant according to the Merriam-Webster dictionary is defined as “a dominant position especially in a social hierarchy”.  This definition is the one more closely related to and applied to domesticated canines as a perceived behavior of studied domestic wolf families. One particular study done by L. David Mech now has proven dominance to be false information when it comes to how wild wolves live. So time to be down with dominance.

The confusion comes in the way people view dominance. People are capable of dominant behavior. Dogs are social and truly tolerant when in an ideal situation. Dominance is learned and can become ingrained due to miscommunication by humans. Clearly, the dog perceived to be dominant is really an insecure, confused animal and may be exposed to a dominant owner daily.

The scientific proof from reputable sources shows the reality versus the myth.

The Macho Myth which states,  “Not only do they (people) betray a theoretically simplistic view of a most sophisticated social structure but also, such notions tend to be counterproductive, inhumane and dangerous when cavalierly extrapolated to dog training, or the treatment of behavior problems.”

By saying a dog is dominant, gives permission to be dominant over them, which doesn’t mean positive reinforcement will be used.

Aggression begets aggression has been proven through a study via the University of Pennsylvania. What positive reward-based trainers have known all along is now a proven study. Aggression is manifested in confrontational approaches to training, the use of pain devices and the myth of dominance perceived by humans as having to dominate the dog to be a leader. This dominating the dogs equals physical confrontation, the addition of pain devices to the training such as choke collars, prong collars, and shock collars. It goes further, however, because even yelling can cause drama and be confrontational, either between family members or directly at the dog. A constant stream of “No’s” or “Shut-ups” confuses the canine and creates additional drama because it teaches nothing except how to be aggressive or reactive.

The reality is a true leader is one worthy of being followed, someone others want to follow instead of are forced to follow.

What is a better definition? Paul Owens, the original dog whisperer states “dominance doesn’t mean who is bigger or stronger.  It simply means setting up your environment so that you control access to things your dog wants and he has to look to you to get what he wants. You control the food, affection, toys, social freedom, climate control, and everything else in his universe. There is no negotiation.”

Owens is talking about the Premack Principle, which in simple terms says if you do this for me, I’ll do this for you. The dog learns to earn and you become worth listening to. What you are really doing is being a dog’s guide, their teacher and educator in a positive reward-based environment creating trust through an unbreakable bond and reliable relationship.

Time Magazine‘s article Dog Training and the Myth of Alpha-Dominance further explains why dominance is a myth and how the domestic dog’s social structure is not confrontation based but social.

Dogs are bred for a variety of reasons from guarding to companion. Behaviors range from aloof and wary to people friendly and lap dog. The very nature of breeding instills traits needing understanding and expertise in handling. Some breeds should not be owned by the average dog owner and some breeds, if not properly trained, will exhibit worrisome and challenging behaviors, the same behaviors that can be an asset to the breed with proper training.

Time Magazine‘s article states, “Mech, who used to ascribe to alpha-wolf theory but has reversed course in recent years, says the pack’s hierarchy does not involve anyone fighting to the top of the group, because just like in a human family, the youngsters naturally follow their parents’ lead.” David Mech is a Senior Research Scientist, who has studied wolf behavior for years and has come to some interesting conclusions about the dominance myth.

The Association of Pet Dog Trainers (APDT) continues to debunk dominance in their efforts to inform the dog training public to the myths of dominance, as stated in an article Dominance and Dog Training. The APDT article states, “Dominance is not a personality trait. Dominance is “primarily a descriptive term for relationships between pairs of individuals.” and moreover, “the use of the expression ‘dominant dog’ is meaningless, since “dominance” can apply only to a relationship between individuals. (Bradshaw et al., 2009)”

The author of Through a Dog’s Eyes, Adam Miklosi, discusses the myth of canine dominance. A transcript from PBS titled “The Dominance Myth” can be found here. He states “scientifically dominance makes no sense” and continues to explain why. (Note: The PBS video documentary is no longer available for free, however you can purchase the DVD.)

Dogs are learning to solve problems throughout their lives. The role of living with humans is that the human takes on a lead role of teacher, guide and anchor in a scary environment. A human dominating a dog makes little sense as it creates a confrontational relationship destroying trust. One dog dominating another dog shows lack of guidance and dogs will do what works to obtain a resource if they aren’t shown an alternative pattern by a respected family member. The dog will continue to do what they perceive works. They have in essence learned this behavior. Repeated over and over it becomes ingrained and falsely termed as dominant behavior.

Scientific proof abounds as to the fallacy and myth of dominance. It abounds in highly reputable sources and lengthy research and study. Creating a cooperative environment in a positive reward-based household equals dominance that is not needed from canine to human or vice versa.