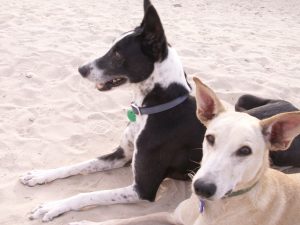 Sadly, the notion that it takes “forceful” persons to be competent dog trainers still exists

I’ll never forget the first (and only) time I ended up in a law suit. It was many years ago and I was young and terrified. I had given my landlord a 28 day notice to vacate my apartment, but a 30 day notice was the law. In his complaint, the landlord additionally sited me for tossing out a (moldy) vinyl shower curtain and urine-stained carpet from the previous tenant’s cat. We met at the court-appointed mediator’s office to resolve the issue and it was there that I got to explain, that while I did toss out his items, I replaced them with new items and was leaving them in the apartment when I vacated. Well the landlord would not relent; he didn’t want the new shower curtain and new carpet! When it was clear that we couldn’t come to an agreement, he started pounding his fists on the table, a move that was reminiscent of the late, Soviet Premier, Nikita Khrushchev, who in 1960 took off his shoe at an assembly meeting in New York, and started banging it on the table while ranting, “We will bury you!” (Actually that quote was from another time, but that’s how I remembered it, when I was 7 years old.)

And in the office that day I was just as terrified as that child when the landlord screamed, “Okay, we will go to court!” [and I will bury you!]

This was no ordinary case; this was MY case and it was going to take the fortitude of a super-hero with a big “S” on his shirt. I needed the big guns of the legal world to win this case against my newly found arch enemy, “Lex Landlord Luthor”, so imagine my surprise when my dad’s attorney,  a “Pee Wee Herman” type man who who specialized in these “criminal cases” met me. He was not stylish, or imposing, and he didn’t have an “S” on his shirt, and I was dreading our court appearance.  But fortunately “Pee Wee” knew the law very well, and we prevailed that day!

This was a valuable life lesson on so many levels, and as I think of all the conversations I’ve had about training dogs over the years I’m reminded of my early perception of what a good attorney should have looked like (or other stereo-type professions) as well as the public perceptions about dog trainers.

The history of dog training has some early roots in the military which I’m sure lends credibility to trainers who advertise “boot camp training” or who are known to have experience with K9 police units. Fear is a powerful motivator and just as I was convinced that only a legal super-hero was capable of defending me against the evil landlord in my “criminal” case, some dog owners are told that their dog’s behavior is criminal which of course requires the force of a drill sergeant to “whip the dog into shape”.

I was conducting a class at a beer garden recently, where my wonderful participants were reinforcing their dogs for lying calmly on their mats (a behavior that we were practicing for the Canine Good Citizen exam). One of the bar patrons came outdoors with his dog, wanting to watch  what we were doing and then proudly told me that he too had hired a trainer to “make his dog into a therapy dog.” I asked him why he choose the particular trainer and he said that the guy used to work with “Army dogs” and he felt he must be knowledgable. And so it goes, the notion that it takes forceful persons to be competent dog trainers.

The face of coaching has been drastically changed by professionals like Phil Jackson and of course everyone knows what Oprah Winfrey has done to change the perception of daytime talk show hosts.

I think if we are going to change the public awareness about “force-free” training, we need to get out of the “obedience arena” because we are NOT obedience trainers; we don’t use commands, and clearly we don’t “make” the dogs do behaviors.

Chicago is home to the Shedd Aquarium where there are hundreds of different species living in habitats, and most recently dogs, all of which are trained and enriched at this facility. Here is an excerpt from an article, The Shedd Way  in the August/September issue of Tails Magazine

One of the most important components of the dogs’ care is their training. Ramirez and the other staff use positive reinforcement, a training technique that rewards good behavior rather than punishes bad behavior. It is the same way they train dolphins to jump on cue and penguins to waddle down walkways. In fact, Shedd trainers have been using positive reinforcement training for so long that they refer to it as the “Shedd Way.” The article goes on, “ All of the animals who live at the aquarium are trained using the Shedd Way. Similar training techniques can be used across the board because, as Ramirez explains, we all learn the same way. “Where a dog differs from a cat differs from a dolphin differs from a fish is in the food they eat, their history, and their natural behaviors. But when it comes to the laws of learning, there is no difference; it just requires an understanding of how to work with each individual species.”

Like the Shedd, If we are going to distinguish ourselves from “the pack”, then in addition to using different labels, (i.e., force-free, positive reinforcement, gentle, science-based, etc.) we also have to stop practicing what we do in the same facilities as aversive trainers. So instead of “obedience schools”, how about “canine enrichment facilities” or other names that describe how we interact with our humans and hounds? 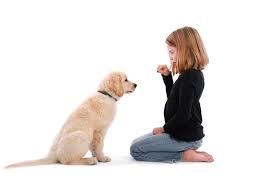