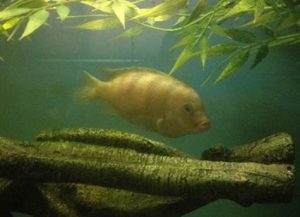 It has been a little over a year since I trained Dudley as part of my Karen Pryor Academy Certification as a Pet Trainer. Not wanting to add more furry pets to our home, I chose a fish as my “other species.” I bought Dudley at a pet shop when he was about a little over an inch long.

Cichlids are intelligent fish. I read an interesting article that stated you can see the intelligence of Cichlids in their hunting techniques. The N. Livingstonii buries itself in the sand and pretends to be dead. When a small fish comes to investigate what appears to be a dead fish, it jumps up from the sand and eats the smaller fish.

One thing I especially love about Cichlids is that they are protective over their offspring. They keep the eggs and the hatched babies in their mouths and defend them with a passion. When danger comes, the babies swim quickly back into their parents’ mouths. Both the male and female protect their babies.

I was excited to begin and see just how much Dudley could learn. He was a cute little Cichlids and had a spunky personality. I brought him home, set him up alone in a tank and let him settle in for about a week. He would stare at me through the corner of his aquarium as I sat a few feet away watching TV.

With positive training, especially clicker training, there is so much joy in the learner. I wondered if it would be the same with a fish, and how would I measure that joy? The first exposure to clicker training for Dudley came when I began to develop value for the clicker in our training sessions together.

The clicker is used to mark the instant the animal does a behavior you want and is a bridge between the behavior and the reinforcement. When you develop value for the clicker, the animal will associate the sound of the clicker with the reward that will soon follow.

I quickly found out that Dudley could not hear the clicker under water. So I used a flash light instead of the clicker to mark the behavior I wanted him to do. Every time I fed Dudley I would flash the flashlight and then drop a tiny piece of shrimp inside his tank. I was amazed at how quickly Dudley learned that the flash of light meant something really yummy was coming. I tried different types of fish treats but Dudley loved tiny bits of cut up shrimp the most.

The first behavior I wanted to capture Dudley doing was to target a stick (a little plastic stir stick used for coffee). I placed the end of the stir stick into the water. Dudley, being a curious fish, swam closer to investigate the stick, when he did, I flashed the light and dropped a little shrimp to him. He gobbled it up. I removed the stick and placed it back in the water and he approached again, I flashed the light and dropped a tiny bit of shrimp into his tank. This is called shaping, rewarding each approximation of the goal behavior. Each time he moved closer, I would flash the light and reinforce his behavior with a tiny bit of shrimp. Once Dudley began to touch the target stick with his mouth, that was the only behavior that I would click and reinforce. Soon he was touching the stir stick with his mouth consistently. Dudley and I had communicated.

When he had targeting the stir stick behavior down pat, we moved onto the hoop. My husband made Dudley a little hoop and suction-cupped it to the side of the aquarium. I decided what behavior I wanted Dudley to do. My goal behavior would be that Dudley would swim through the hoop. Each time he moved closer to the hoop I flashed the light and dropped the shrimp for him. One day he swam right up to the center of the hoop, I flashed the light and dropped the shrimp on the other side of the hoop and he swam through it to get the shrimp. From then on, each time he swam through the hoop, I would flash the light and he would be reinforced with a piece of shrimp. Dudley is a smart fish, I was amazed at how quickly he learned.

Dudley was really enjoying himself, so I thought, why not try another behavior? I decided to teach him to swim around a little ping pong ball stuck to a straw that was weighed down under the gravel. I shaped this behavior as well by reinforcing approximations of the behavior; looking at the ball, swimming near the ball and so on and, sure enough, Dudley soon began swimming around the ball. Each time he swam around it, I would flash the light and then reinforce the behavior with shrimp. Dudley began swimming around the ball consistently. If Dudley could do each behavior separately, why not link them in a little chain? So that is what I did. I linked all the behaviors and created a little agility course for Dudley. He was reinforced for first touching the target stick and swimming through the hoop. When he had this down, I added the last bit of the chain, swimming around the little ball. Each behavior was a cue in itself. He did it! He loved to work. In the evening when we were eating dinner, Dudley would face us in the aquarium and just stare at us, eager to do his routine. You can see a video of Dudley doing his obstacle course here, complete with light flash as a marker.

I learned a lot about reinforcing behavior through training another species besides a dog. Dudley taught me something too. He taught me that he liked to earn his food more than just eating it off the top of the water. If I just dropped food in, he would ignore it, or swim very slowly over and look at it. He did not want a free meal, he enjoyed working for his food. How boring it must be for animals who are used to hunting for their food, to have everything handed to them. This concept of working for food in preference to taking it for nothing is known as contra freeloading and was also covered in our previous issue (BARKS from the Guild, October 2014, p.52).

Clicker training is a powerful tool to shape behavior and enrich the lives of our pets both physically and mentally. Clicker training has been used successfully to train horses, pigs, cats, guinea pigs, rabbits, dogs, big cats, wild dogs, dolphins and other sea life, birds – even chickens. My husband once clicker trained some of the wild fence lizards we have on our property, but that is another story.

This article was first published in BARKS from the Guild, January 2015, pp.48-49. For more great content on all things animal behavior and training, you can sign up for a lifetime, free of charge, subscription to the digital edition of BARKS from the Guild. If you are already a subscriber, you can view the issue here.

About the Author
Sharon Empson is a Certified Training Partner with the Karen Pryor Clicker Training Academy. She runs her own training business, Hot Digity Dog Training where she conducts private in home sessions with her clients. She is also a Dog Tech certified Dog Walker, a member of Doggone Safe and a ‘Be a Tree’ presenter. She lives in Lake Elsinore, CA with her husband and their three terriers and of course, Dudley the Cichlid.