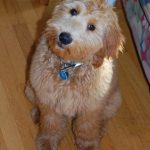 Labradoodle Charlee…started to respond fearfully when the telephone answering machine beeped. She became afraid to enter the room where it was located, even when there was no beeping sound. She traversed a roundabout route through the house just to avoid that room. Her fear further generalized to beeping sounds on television programs, but the most “heartbreaking” response was when the smoke detector battery died and the device emitted a constant screeching beep which terrified Charlee. Read article