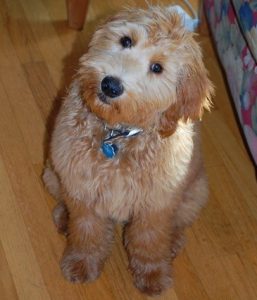 Charlee was a social dog who loved meeting new people and dogs — shortly after the ECS was installed she saw a dog across the road and went to greet him, getting shocked as she passed the buried wire, making her too afraid to return to her yard © Charlee’s Stewards

My clients Maggie and George* had both grown up with dogs. Now, as a married couple, they were ready for a puppy of their own. In 2009, they bought a house with a large lot that was ideal for a dog and joyful labradoodle, Charlee, thus entered their lives. As the house was located along a busy boulevard they, of course, wanted to keep Charlee safe while enjoying the yard, so they considered installing either a physical fence or an electronic containment system (ECS). Building a physical fence for a large yard would be expensive and they decided to seek advice from others before proceeding.

Charlee’s breeder was not keen on the idea of an ECS and pointed out that it would do nothing to keep their puppy safe from anyone or anything which entered the yard and she would be trapped if the ECS prevented escape. Unfortunately, she did not explicitly counsel against it, and so Maggie and George went ahead with the ECS installation anyway.

An ECS consists of a wire which is buried underground at whatever perimeter is determined to be acceptable and the dog wears a collar with an electronic device which senses when she is in proximity to the wire. The model Charlee wore could be configured to deliver a beep, and/or an electric shock, or both. If the collar got too close to the wire it became charged and delivered a beep and/or shock.

The family chose to contract with a national ECS franchise to install the system. As George explained: “Such a franchise is not necessarily owned by a dog person. It is more likely a businessperson and the installation was nothing more than a transaction.”

George stated the installer “did not do much” in terms of teaching Charlee. One thing in particular stuck in George’s memory and it bothers him to this day. Apparently, the installer kept flicking his finger on the tip of Charlee’s nose “to get her focus.” Maggie recalls that he did so because Charlee was not sitting. Neither of them appreciated the way he treated their puppy with George explaining that, “it set the tone.”

George described Charlee’s response as a look that suggested she was wondering why they were allowing this person to hurt her. She was about 6 or 9 months old at the time. George still feels bad that he did not stop the installer from treating Charlee as he did, and I heard the enduring sadness in his voice as he expressed the words.

First, the installer put the collar on Charlee so she could get used to it. Then, he configured the collar to beep when she was taken to the buried ECS wire. Ultimately, he configured the collar to beep, and then deliver shock when she was close to the wire. The final step was to repeatedly take Charlee too close to the edge of the yard so shock would be delivered, until she “understood” to stay within the yard. The installer spent less than an hour with George, Maggie and Charlee and he never followed up with them to find out how things were going. It was a once-and-done transaction.

Repeated Shocks
Charlee was a very social dog who loved meeting new people and dogs who passed by the house. Shortly after the ECS was installed she was in the yard and saw a dog on the boulevard median which divided four lanes of traffic — and went to greet the dog. As she passed the buried wire she was shocked, and then she remained on the median. George and Maggie described her as being afraid to return to the yard. George was immediately upset that the ECS was not working as promised, which defeated the reason for installing it in the first place. 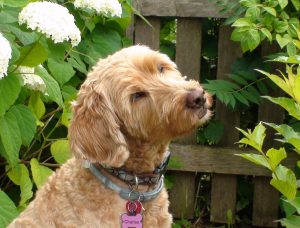 Following her experiences with the ECS, Charlee started to respond fearfully when the telephone answering machine beeped and became afraid to enter the room where it was located, even when there was no beeping sound © Charlee’s Stewards

Research has shown the escape rate is higher for dogs kept within an ECS than for dogs within a physical fence (Starinsky, Lord & Herron, 2017). Shortly after that unfortunate event Charlee was with her family in a room at the rear of the home where they often relaxed together. She lay on the floor beside her guardians, still wearing the shock collar. George suddenly heard the collar beeping and then Charlee was being shocked. Repeatedly. He and Maggie were deeply disturbed by the thought that their puppy was being shocked while inside the home, in the very room she most enjoyed. They quickly removed the collar and George began investigating the matter. What he found was an electrical wire tacked to the basement ceiling rafters, directly beneath where Charlie had been laying. He estimated there were perhaps two or three inches of flooring material between the wire and Charlee. Said George: “The wire carried an electric current and generated an electronic field with the collar.”

They immediately got rid of the shock collar and paid to have a solid wooden fence installed, but received no refund for their ESC expenditure. Eventually, after some passage of time, the family moved to a new home in Madison, Wisconsin.

Generalized Fearfulness
Sadly, this negative learning experience followed Charlee and she started to respond fearfully when the telephone answering machine beeped. She became afraid to enter the room where it was located, even when there was no beeping sound. She traversed a roundabout route through the house just to avoid that room. Her fear further generalized to beeping sounds on television programs, but the most “heartbreaking” response was when the smoke detector battery died and the device emitted a constant screeching beep which terrified Charlee.

Charlee had always been afraid of thunderstorms, gunfire and fireworks. With an underlying sound sensitivity, it would have been helpful if the ECS installer had asked about such things or cautioned about the unintended fallout of using a shock system, but no warnings were given. Meanwhile, George and Maggie got rid of the answering machine. Eventually, 10 years passed since Charlee had worn the shock collar and she went on to become a registered Pet Partners therapy dog. Maggie, however, remained concerned because Charlee had started to resist walking in their neighborhood.

Environmental Stimuli
The onset of the behavior corresponded with a major road construction project that was taking place on several city blocks near George and Maggie’s home. As a result, numerous heavy construction vehicles operated all day long, each equipped with a loud beeper which sounded whenever a vehicle backed up. In spite of the passing of time, Charlee continued to generalize fearful responses to other stimuli even though they did not directly involve the electronic shock system she had been subjected to in her former home so many years ago.

To avoid these noisy and aversive local environmental stimuli Maggie began driving Charlee to remote locations for walks. A nearby nature arboretum provided a quiet, safe location and Charlee resumed happily enjoying her walks. Another peaceful location was a long peninsula which jutted into beautiful lake Mendota, and Charlee was fine, at least, until a motorboat sped past and once more a fear response was triggered. Fearful events are recorded in the amygdala and remain persistent (Falconer-Taylor, 2020).

Meanwhile, Charlee and Maggie were scheduled to take their biannual Pet Partners evaluation for therapy dog registration. One of the exercises involved walking through a crowd of people, while someone located behind the dog dropped an object which made a sharp sound. Dogs on Call, a local therapy dog program which administers the evaluation, used a baking tin dropped on a hard floor to create the sound stimulus. As a member of Dogs on Call who often helped during evaluations, I shared Maggie’s concern that Charlee may be so alarmed by the sound that she would not pass. She was otherwise perfectly suited to help others as a therapy dog.

None of these unintended harmful outcomes were anticipated when Charlee’s family sought to keep their new puppy safe from vehicle traffic at their original home. George and Maggie had her best interests at heart and thought they were helping her to stay safe. They are loving pet stewards and, while it has not been easy, agreed to share their experience here to inform and educate others. They expressly stated they did not want another family or their beloved dog to go through the same sorry experience. George stated he “does not want to demonize” the owner of the ECS franchise; he assumes the person was not well-informed.

Unfortunately, too many well-intentioned families experience similar problems. As an accredited professional dog trainer with a canine behavior certification, I have found that the majority of my behavior cases involve anxious and fearful dogs. As a participant in PPG’s international advocacy program Project Trade, whereby clients swap aversive training gear for service discounts, I have so far accepted 18 shock collars from clients in return for a concession on my training and behavior consulting services. Each family had a story to tell. These are among the problems they reported to me:

As force-free, scientifically informed trainers and behavior consultants, our goal is to help educate dog owners and professionals to protect family pets. One way to do this is to support the Shock-Free Coalition by signing the Pledge. Their goals are to educate pet owners and, indeed, professionals who persist in recommending such devices, and to remove shock devices from the supply and demand chain altogether. We already know that there are alternatives which work and do not produce unintended harmful consequences (see Resources).

Footnote: I am pleased to report that Maggie and Charlee passed the Pet Partners evaluation and carry on their good work as an animal assisted therapy team.

*Names have been changed to protect the privacy of the individuals.
BARKS extends its thanks to Charlee and her guardians for sharing their story.

This article was first published in BARKS from the Guild, March 2020, pp.28-30. For more great content on all things animal behavior and training, you can sign up for a lifetime, free of charge, subscription to the digital edition of BARKS from the Guild. If you are already a subscriber, you can view the issue here.

References
Falconer-Taylor, R. (2020). Pets, Fear and Fireworks: The Fallout and Terrible Consequences of Fear and Anxiety for Our Pets. Part 1, The Neurophysiology of Fear. Available at: bit.ly/387yPeI
Starinsky, N.S., Lord, L.K., & Herron, M. E. (2017). Escape rates and biting histories of dogs confined to their owner’s property through the use of various containment methods. Journal of the American Veterinary Medical Association 250 (3) 297-302. Available at: bit.ly/38xFxKx