Much has been written about electronic shock (training) devices in their various forms. With all models a dog wears a collar fitted with an electronic device with two metal rods touching the neck of the dog, delivering electric shock. 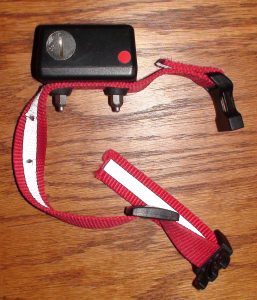 Just a tingle, or a terror?

Delivery systems fall into three categories: 1) A person must press a button on a handheld remote control to initiate the shock; 2) The collar has a microphone to detect (barking) sound and trigger shock; 3) A buried wire emits a signal detected by the collar, triggering shock.

I will address the third category known as Electronic Containment System (ECS). It is sometimes called invisible fence, hidden fence, buried fence or some variant of that theme, making it sound less threatening.

I prefer to call them devices designed to ambush a hapless dog that comes close to the trap. They relieve the owner of direct responsibility for delivering shock. “The dog can avoid the shock by staying away from the boundary” they rationalize.  “It’s not my fault, the dog did it to himself.”

Consequences of electronic shock are well documented in the Pet Professional Guild “Position Statement on The Use of Shock in Animal Training” including 26 references.

I consider ECS an ambush predator due to the insidious nature of the beast. During installation a wire is buried just under the surface in a boundary perimeter which the dog is unaware of.

Dogs are unaware human beings consider little parcels of the natural world their property and then divide claims with the aid of professional surveyors who measure a residential lot. Dogs do not read documents prepared by attorneys with legal descriptions of the precise boundaries of said property.  They just live there.

All a dog knows is that it depends upon and trusts a human caretaker to be a faithful steward. Stewards have a responsibility for those entrusted in their care to keep them safe and sound, so man’s best friend does not suspect their caretaker has laid a trap that he cannot see, buried beneath a property boundary he cannot conceive of.

In a process purportedly meant to “teach” a dog the boundary so he learns not to cross it, the owner leads his trusting furry family member to the edge of the yard and intentionally forces him into proximity so the collar delivers a shock.  Yikes!

Would any rational parent lead a toddler into the street to be struck by a car to “teach” the toddler to stay out of the street?  Dogs, after all, are much like toddlers in terms of cognitive and emotional development.

Some models deliver an electronic sound such as a beep prior to the shock. At first, the beep is just a meaningless sound.  Since the owner is setting the dog up to fail, the dog learns a lesson through associative learning: beep predicts shock, equals pain and fear.

For owners who proudly declare they “only” use the beep function and never shock their dog (again) I must report the beep has the same physiological and psychological effect as the shock. It triggers a startle response.

If indeed they shocked their dog “just once” and it learned to fear the beep, that constitutes a one-time learning event which is based in the primitive part of the brain.  Yes, fear is a powerful teacher.

In other words, the flight-fight system is activated. An intensely frightening experience can produce a lasting memory in a dog, or a human for that matter.  In fact PTSD is an example of that process.  PTSD permanently changes the brain, as we know from human psychiatry.

If I close my fist, draw back my arm and punch you in the face I may do that
“just” once…and you will develop a conditioned emotional response of fear. I might even boast that now I “only” need to make a fist and must no longer hit you in order to inhibit your behavior.

You will remember. So does a dog.

Recently I learned the consequences of such events in conversation with a client, Krista DeBellis, founder of Wisconsin Reactive Dog Support Group. It is one thing to intellectually consider research data reported by objective scientists, and another to hear real-life consequences affecting dogs and their families.

Krista bought a home in 2005 and the seller related an event that occurred just prior to closing the transaction. The seller had two Westies and installed an ECS in the front yard. As per the “training” process the owner took his little dogs to the edge of the yard.

One of the Westies froze in terror when it was shocked, entering a state of learned helplessness. It remained in place, continually being shocked with electricity.

As the seller explained to Krista, the dog refused to leave the house ever again. Krista saw evidence of this when she observed the carpeting stained by dog waste and numerous scratches on the inside of the door, left by tiny panic-stricken paws.

Krista had a five-month Cocker Spaniel and never used the ECS with Monty. He was “the star of the neighborhood” and enjoyed meeting people and dogs during daily walks. One of his regular social visits was a house down the street where a Boston Terrier and a newly acquired Labrador puppy lived. 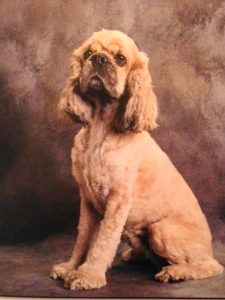 Star of the neighborhood!

When Monty passed by the house his Terrier and Labrador friends happily met him along the sidewalk and they got along famously…until the homeowner installed an ECS.

Krista quickly saw changes in behavior as both dogs began pacing the yard in a state of high arousal whenever Monty approached. The pacing grew more intense with the passage of time and the Terrier was profoundly affected, eventually lunging and rushing the street.  He rushed toward the electronic boundary, yelped in pain, and retreated in fear.

The Terrier learned to associate pain and fear with the approach of his friend, Monty.

As I heard this my mind raced to a study published by Richard Polsky in Journal of Applied Animal Welfare Science titled “Can Aggression in Dogs Be Elicited Through the Use of Electronic Pet Containment Systems?”

If you need a hint, in animal research when scientists want to elicit aggression in lab animals, they use shock.  Pain and fear can teach an animal, but what does it teach?

Monty was lucky and the Terrier caused no real physical damage. On another occasion the Terrier burst past the boundary and was lost for days.  Some time later the owners got rid of their Labrador telling Krista they “could no longer control him.” I wonder how adoptable the Lab was once the damage was done?

People who were mauled while passing by dogs in yards with ECS were not so fortunate, as reported by Polsky in his research. None of those dogs had any aggressive history prior to their exposure to ECS.

Those dogs learned too.

One of the tricky things about any form of shock is that while we know punishment causes fallout we cannot predict exactly what will happen, or when, or how severe it will be. To use shock in dog “training” is to spin the Wheel of Misfortune.

In my experience with clients I learned how another Labrador puppy responded to ECS “training” in his back yard with such fear that he refused to go outside, and he was not yet housetrained. Good luck with that, Mr. pet owner.

Another poor dog client lived in a condominium with a small back yard and an even smaller front yard, both of which had ECS. The owner, who taught psychology at a local college, even set up ECS barriers within her home. Her dog was restricted to a couple of rooms with slippery wood floors and the ECS was sometimes active, and sometimes not.

That dog could never have known which space in his environment was safe and which was not, which probably accounted for the extreme instability I observed in his behavior.
On top of that he was left alone nearly 12-hours each day, six days a week with no mental stimulation or exercise. All he could do was peer out the back window and watch happy dogs passing by with their owners on the walking trail at the edge of the lawn…where the ECS lay ready to ambush him.

Sadly, he learned all too well what it means to live with shock.

I do my best to inform dog owners of scientific data and impress upon them the real-life consequences for pet dogs, and am grateful to Pet Professional Guild for continual development of educational materials for pet owners.  Thanks to Project Trade for enabling me to offer discounts in my services for aversive gear surrendered to me. 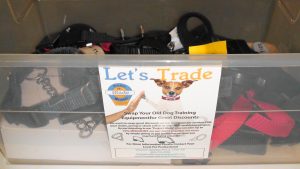 With help from colleagues in PPG I strive to empower more people make the transition from an attitude of ownership to stewardship. Remember folks, you are your dog’s best advocate!