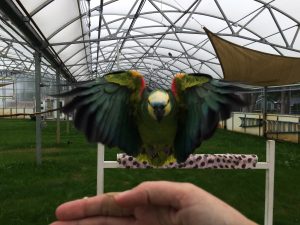 As animal trainers and behavior consultants, our work can appear very appealing to pet owners and those who work with and take care of animals. What we demonstrate in our training is a very important tool we can use to educate the public about how our work is done, its impact on behavior and mental stimulation, and responsibility in animal care.

Being an animal trainer and understanding applied behavior analysis, using it, and showing others how to use it is very important to me. My intention is to show the average companion animal owner how it can be used with all animals and not stop at the dog or the horse. I show people how to use the same applications with fish, parrots, pigs, wildlife ambassadors, rats, zoo animals and more.

Pigs are very food motivated. Most can and will work for hours as long as food continues to be delivered. When I post photos of my pig training on social media it is very common to get comments such as, “Oh, how adorable,” and “I want one!”

These comments often make me second guess my work or how I present it. I continue to present it in association with common behavior concerns and the importance of training, as well as overall time spent with the animal.

In working with exotic or less commonly owned animals, I am, unfortunately, beginning to see similar concerns with shelter statistics that the canine community has been privy to for years.

I work a lot with the avian community, both psittacines (parrots) and raptors (birds of prey). I show people the inflight recall training photos I have of birds flying down from the rafters to my hand or glove.

My intention is to show people how this training can be done, and that we do not need to use force and capture the birds to get them to come to us.

Wing clipping is still a common form of supposed behavior modification in parrots and I see it in raptors as well. It is more common in parrots because they are popular in the companion animal community, whereas native raptors require state and federal permits.

It seems that it is more shocking for people to see the wings of a hawk clipped but I wonder why it is not equally as shocking for the parrot.

Parrot shelters and sanctuaries are becoming more common, filling up quickly and running out of space. It is not uncommon to hear of a shelter that holds over 800 parrots.

One of many dilemmas for parrot shelters is the lifespan of the bird. These are not domesticated creatures and, in captivity, some of them can have a lifespan exceeding 30, 50 and even 80 years.

I am 44 years old and would love to get another parrot, but I have to be realistic. Before getting another parrot I need to think carefully about who I am going to will him to, because in another 40 years, he will likely have gone through only half of his lifespan.

As of 1992, parrots are no longer allowed to be shipped into the US from their native countries, but breeding these birds is still common here as so many of the wild populations are on the brink of extinction. One of these species is the Spix Macaw, which is extinct in the wild but there are a few research facilities that maintain a small flock.

I have often been asked why birds in rescue facilities cannot be released back into the wild, instead of spending the rest of their lives in a shelter or sanctuary.

The reason is that, in breeding facilities, it is still widely practiced to pull the eggs from the parents, incubate them and then hand-rear them, feeding them via a syringe. Parrots raised this way do not get the chance to be raised by their parents and are instead imprinted on humans.

Imprinted parrots can have a plethora of behavior issues as they mature and will likely not survive if released.

There are several reasons for this. Parrots raised in captivity are not raised to learn how to escape predators, making them likely to be hunted by birds of prey or other native predators. They also do not know how to look for food because they have spent their lives eating from a bowl.

Wildlife officials do not want non-native birds released into the community, and many parrots may have acquired diseases in captivity that may be transferred to the wild bird population.

There are certain species of parrots that have escaped or have been let loose in North America and are surviving in the wild. There are flocks of macaws and other parrots living wild in warmer states such as Florida, Texas and California. Wild flocks of Quaker parakeets are thriving in colder states such as New Jersey and Chicago.

They can, however, be damaging to native habitation and are illegal to own if not clipped in some states.

The Wild Parrots of Telegraph Hill is a documentary by Judy Irving focusing on the life of Mark Bittner and his relationship with a flock of feral parrots living and thriving on Telegraph Hill in San Francisco.

There is controversy about what to do with these flocks of non-native parrots. The four species of native parrots that once existed in the US are now all extinct. Meanwhile, parrots in captivity can be found in abundance in the shelters, and behavior issues such as screaming, biting, self-mutilating and plucking feathers are more common than ever.

These rescue pigs are no longer “mini pigs.” Sadly, pig shelters are now peppering the US as aspiring pig owners find it hard to meet the animals’ needs or deal with the subsequent behavioral issues © Lara Joseph

One of the many other exotics that I train are pigs. One reason for this is the increasing number of behavior concerns that have arisen since pigs have become more popular as pets and are now living inside people’s homes.

In addition, many people do not realize that there is no thing such as a teacup pig. Pigs can fit in a teacup right after they have been born and that is about it. Within a few days they can no longer fit, yet the term “teacup” continues to be used heavily in their marketing as companion animals.

Mini pigs and pot-bellied pigs are both gathering more and more interest from the pet community. Mini pigs are those who grow to be around 30-50 pounds. Pot-bellied pigs are also considered mini pigs compared to hogs and can range from 50 pounds up to – and even over – 250 pounds. These big animals are sleeping in houses, in people’s beds and living with human families.

What is the attraction? This is individualized but there is a huge community that thinks pigs are cute. Pigs can be cuddly and like to snuggle under blankets and lie on couches with people. The mini pigs are a big attraction because of their more petite size.

I have seen people polish their hoofs, dress them up in tutus and roll them along in baby strollers. Anthropomorphism is very common in the exotic pet world as well, especially in the mini-pig community.

As I mentioned on the PPG Radio Show on May 3, 2015, the top behavior concern pet pig owners contact me about is aggression. Common aggressive behaviors are described as charging, lunging, biting and head-swiping.

Pigs are pigs. They like food. Drop a piece of food on the floor with a dog and a pig in the same room and you could quickly be making a trip to the veterinarian. Pigs will show any or all of the above behaviors when food is involved. They will also show them in the absence of food.

That aside, it is very important to socialize pet pigs when they are young so that they will accept strangers more readily in the future. Predictable environments can quickly create boredom and with boredom comes destruction.

Pigs have been known to uproot tile floors, eat door jambs and carpets, pull wallpaper off of walls and so much more. Lack of appropriate enrichment often accompanies the destructive behavior and, as these behavior concerns rise, people are quickly surrendering their teacup pigs. Sadly, pig shelters are now peppering the US.

Equally concerning amongst the pet pig community is the behavior advice often provided through YouTube, Facebook and various other channels.

For example, there is a common “training” practice known as “move the pig.” It involves intermittently walking up to a pig and forcing him to move with your foot, hand or whatever else. The concept behind this is to apparently “show” the pig who is “in control” in the household.

Pigs are seen doing it to each other so the intention is that pig owners can claim their “dominance” in the same way. The emails I receive requesting behavior consultations are overflowing with people incorporating the move the pig technique.

What is of even bigger concern to me is the ages of the pigs who are now charging, biting, lunging and head-swiping their owners. Just recently I was contacted by two different people who have used the move the pig technique and are now dealing with the fallout. The pigs are a little over one month old and three months old respectively.

And then I wonder about the owners who are not reaching out to positive reinforcement trainers even though they are experiencing these same issues. I currently have a client who had been using a shock collar on the family pet pig and boarding him at dog kennels while on vacation.

More Exotics in Shelter and Rescue

The increase in numbers of these exotic animals in shelters is a cause for great concern. Exotic animal shelters will become more and more prolific.

I enjoy sharing my life with parrots, pigs, fish, rats, dogs and the many other animals I come into contact with but this lifestyle and the persistence in training and enrichment it requires is not for everyone. It takes constant interaction, energy and creativity, which can be very challenging and inconvenient for the average household.

As a result, these animals who were originally considered cute and cuddly can now be seen fast filling shelters nationwide. It is a sad situation for sure.

This article was first published in BARKS from the Guild, September 2015, pp.39-41