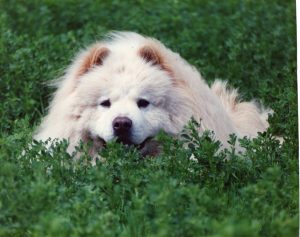 If you work with dog owners or cruise the dog behavior groups on Facebook you will often see dogs that are labeled ‘dominant’.  I hear this most often in client homes where they have multiple dogs and have categorized one as the dominant or “alpha” dog because of his or her interactions with the other dogs.

He/she is often described as the dog who is stealing all the toys, pushing the others out of the way at the doorways, hoarding all of the chew bones or fighting over them, seeking – if not demanding – the humans’ attention away from the other dogs, guarding the food or water bowls, playing too roughly and ‘enthusiastically’ with the other dogs, or keeping the other dogs off of the comfortable resting areas so they can have them as their own.  It appears to be seen even more predominantly within a household where the dogs are of similar age, especially siblings.

However, if you take the same dogs out of the comfort of their home or familiar territory (such as a well -frequented dog park) or even away from their familiar play mates, you may see a very different dog.  One that is much more hesitant around new things, interacts in a shy or reactive way to other dogs and/or people or perhaps they act overly friendly with a lot of jumping around other dogs or people, doing lots of ‘kissing’, lots of soft body curves, mouth licking, submissive grins, lowered head, or even excessive mouthing, all which can become obnoxious submission.  So how can it be that this dog that is SO ‘dominant’ in one situation is so different in another? 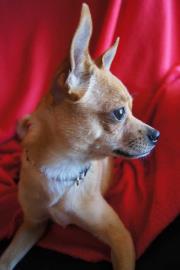 Remember the bully on the playground in grade school or the class clown in your high school class?  There is a similarity between humans and canines in that insecurity and anxiety will be displayed in a variety of ways.  The dog that is pushy and easily over aroused and gets into squabbles with the housemates is much like the bully on the playground, whereas the obnoxiously submissive dog that is constantly seeking approval from the other dogs and/or humans is much like the class clown!  You may see both behavior displays from the same dog, just in different situations.  The fake ‘dominance display’ is often seen at home and in familiar surroundings whereas the submissive display may be seen in a novel environment or circumstance.  The latter is usually not of much concern to most dog owners other than it can be a little annoying, but that obnoxious submission can be extremely irritating to some dogs and can actually cause an escalation in communication efforts that may result in aggression.

We have an adult Great Pyrenees, Mama Shay, who is excellent at giving and reading canine body language.  She can meet and greet almost any dog that is willing to ‘listen’ to her because she is never forward in her approach unless invited by the other dog through appropriate body language.  However, young dogs that fall into the category of obnoxiously submissive, really push her buttons.  She will give them an appropriate cut off signal with a head turn or eye avert which usually indicates to a dog with good communication skills that a direct approach is not desired.  However, if the dog continues to approach in this overly-appeasing way, rolling on the ground showing a submissive grin, doing lots of lip licking and eyes blinking like a flickering Christmas tree bulb, she may be pushed to the level of giving a small growl to warn them away.  This in turn, makes them seek approval even more intensely and that can often result in a Great Pyrenees who is irritated and would escalate into more aggressive displays if we did not intervene.

Once a dog like this becomes familiar with their environment and the other dogs in the play group they often turn to the bullying behavior so often referred to as dominance.  By being bouncy, barky, and mouthy during play, or playing in a way that can be over the top with a lot of acrobatic movements, pushing the other dogs out of the way as they go through the doorway, or hogging the human interaction from the other dogs these dogs have gone from what appears to be one extreme to another.

Modern, educated dog trainers know it is always extremely important to identify the behavior and body language of the dogs without labeling it.  But pet owners have most likely already done that!  When they describe their dog as alpha or dominant it is important to get the actual physical behavior instead of the label.  I give them another more accurate characterization of the behavior: False Bravado.  A dog like this displays an almost over-the-top amount of courage but in reality it is a false show of bravery.  As mentioned previously, this behavior is a symptom insecurity or anxiety.  The dog is compensating for their lack of confidence and appropriate communication skills by bullying.

Hearing the term ‘dominance’ or ‘alpha’ can give a trainer a snapshot of what may really be happening in the household and the use of the False Bravado term may help us reframe what the pet owner is seeing into a more accurate term.