The Fearful Rescue Dog Who Changed My Life 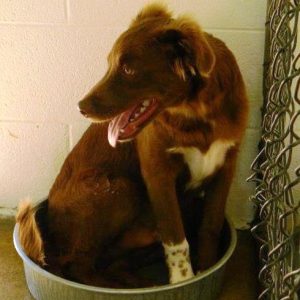 Jackson sitting in his food bowl at the shelter: the picture that changed his new guardian’s life and when she knew she had finally found her dog © Gloria Schmidt

Back in 2011, I had accepted a job at St. Jude Children’s Research hospital that required moving to a new state, 13 hours away from home, to a place where I initially knew nobody within a five hour radius of Memphis.

As an anxious and quieter type of person, I was frequently asked if this life change was the best idea for me. My constant answer was, “It will be great, I’m going to get a dog!”

After getting settled in Memphis, I started thinking about what kind of dog would be a good fit for me and my lifestyle.

I looked high and low for about seven to eight months through various shelters, websites, and rescues for *my* dog. It felt frustrating and disheartening at times because I wondered if I was maybe reaching for a perfection that didn’t exist.

I also was living in an apartment that had some major breed restrictions and no fenced-in yard that most rescues required. Then, one Friday, I saw the picture of Jackson sitting in his food bowl at the shelter (see photo, above). And I knew. That was him. My dog.

The one-hour drive to reach the shelter where Jackson (or #2211 as he was then called) felt like eternity. I got up at the crack of dawn to ensure I was arriving right when the shelter opened. I remember just praying that this might be the ideal furry friend I was looking for in a season of loneliness.

When I arrived at the shelter, my heart stopped when I saw another lady already standing at the front doors. I knew without a doubt that we were there for the same dog.

The woman, who I later learned was Cathy, was there representing a rescue and when I begged her to let me take the dog, she spoke with the rescue’s leadership and they agreed to step aside. 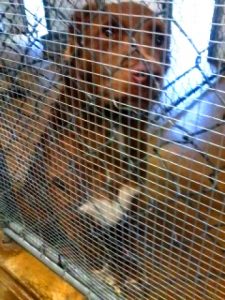 Cathy became a calming force for me that day. I remember the shelter staff was terse and we walked back to Jackson’s run (see photo, right). When we asked to interact with him though, we were told, “No. You take him or leave him.” Oh my. Wow. I surveyed the scene (and a totally soaked Jackson). I then broke my number one rule that I’d never adopt a dog without some one-on-one interaction first. I stood up, turned to the shelter worker, and said decisively, “I’ll take him.”

After signing adoption papers, I was on cloud nine as the “me” turned into a “we.” Jackson eagerly watched from the passenger side as we waved goodbye to Cathy. Our first stop was a vet clinic for an exam, followed by a trip to Petsmart for a new toy (picked out by Jackson, of course), and then home to my Memphis apartment.

Although most people tend to prefer younger puppies when adopting, I purposefully wanted to pick an older pup that needed a home just as badly. I also figured that picking an older dog might help me avoid some of the common puppy parenting issues (house training, crate training, leash walking, etc.). Oh to be young and naive.

I quickly learned on our first evening together that Jackson needed a lot more support than I initially realized despite being 7 or 8 months old:

This last one scared me the most. In breaking my number one rule upon adopting Jackson, had I accidentally allowed a monster into my home? And where do we go from here if this dog doesn’t seem to trust me (or really anyone) for that matter?

A majority of the dog training sources my family gravitated towards in the 90s were a mixture of negative and positive reinforcement. Being “alpha” seemed to pop up everywhere as well.

On our first evening together, I tried to use some of what I remembered from childhood with Jackson. I wanted him to know “who was large and in charge?…me!” especially if he growled or didn’t like his leash or had an accident inside. Again, oh to be young, naive, and ignorant!

Jackson’s response to these methods? Total system shut down. That first night, he cried almost the entire eight hours in his crate while I sat in my bedroom panicked, heartbroken, and thinking, “Did I make a mistake OR….am I going about this the wrong way?”

I pulled out my laptop and began researching breeds I thought Jackson might be. A common theme for every breed I googled? “Needs a positive, reassuring handler…,” “Does best with positive reinforcement…,” “Responds well to a happy voice…” I resolved to try some of those techniques in the morning with Jackson. And so ended Day 1. 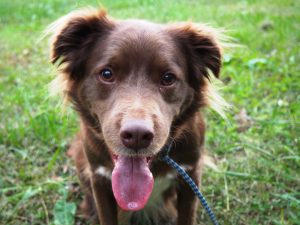 Jackson, no longer fearful, enjoys a game of fetch in the great outdoors © Gloria Schmidt

The next morning, I did my best to keep it positive and upbeat for Jackson on our first walk. I was stunned that something as simple as the tone of my voice could transform him so quickly. He suddenly was relaxed, receptive, and responsive.

Little did I know, amidst those initial days of trial and error, that Jackson was not only the start of my own family but also the catalyst that would lead to two very transformed lives.

In learning how to help Jackson, he opened up the possibilities of how positive reinforcement, clicker training, mutual respect, and cooperation worked as we conquered each one of his “quirks.” In turn, I have gotten to watch a small, scared dog transform into a relaxed, confident companion.

Jackson will forever be credited for my decision to enter the training world professionally and for showing me how to stay “pawsitive” when communicating with animals.

I remember the seven to eight months I spent searching for “my dog” and don’t think it’s a coincidence that Jackson was born at the approximate moment my search began. I believe the universe knew we needed each other and helped our paths cross in the most perfect way. Who rescued whom? You tell me.

This post is the Pet Professional Guild runner up entry in our Geek Week 2020 Writers’ Competition. All winning and other selected entries are being published here on the BARKS Blog and in upcoming issues of BARKS from the Guild. 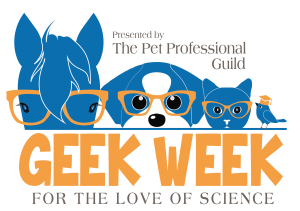 About the Author
Gloria Schmidt graduated from University of North Carolina at Chapel Hill with a degree in chemistry then spent approximately five years playing lab rat. Her favorite job was working in drug discovery for pediatric cancers and orphan diseases at St. Jude Children’s Research Hospital. After getting the itch to be around people more, she realized she wanted a career that included not only humans, but animals as well. She slowly began to shift her career towards the veterinary and training worlds and worked as a veterinary nurse at two different practices. She also began to immerse herself in the world of learning theory and training with the help of FACT Academy and Karen Pryor. She now works full time as a group class instructor, private lesson instructor, and board-and-train/day school instructor. She has completed the Fear Free Veterinary Professional (Level 2) certification program and is working on her CPDT-KA. She can be found on Instagram @theteacherspettraining.