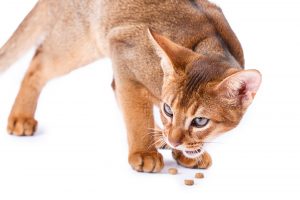 Q: My older cat does something frustrating while eating his food. He eats some of it, then tries to cover the rest of it with miscellaneous items nearby. Sometimes he even paws at the ground around his food plate or drags his placemat across his food plate, covering it a bit. My other (younger) cat does not do this. Is it related to age? Does this behavior mean he does not like his food?

A: Two of our feline family members do this too! Understanding the why behind behaviors is key as hard-wired and instinctual needs are quite often at the heart of these kinds of frustrating feline behaviors.

Reflex Responses
Many of the behaviors we observe our feline family members displaying are closely controlled by genes and are known as innate behaviors. They are inborn and occur naturally in all members of a species. Within each species, innate behaviors are predictable. They can be performed in response to a cue (changing of the seasons, daylight, etc.) and without prior experience or exposure to a particular cue. Think of them as reflex responses or actions. Unlike behaviors such as learning to ride a bike, tie your shoe, or brush your teeth, innate behaviors do not have to be learned or practiced. Innate behaviors are:

Innate behaviors are also called instinctive behaviors. An instinct is the ability of an animal to perform a behavior the first time he is exposed to something that causes a response. Here are a few common examples:

Critters Who Cache
Caching behavior is the storage of food in locations hidden from the sight of both conspecifics and members of other species. For some species, the function of caching is to store food in times of surplus for times when it is less plentiful. However, there is evidence that caching behavior in some species done to ripen the food (de Kort, Dickinson & Clayton, 2005), although this is not believed to be the motivation behind house cats’ caching behavior. We do know that the house cat’s closest living relative, the European wildcat, does cache its food. The motivation and drive behind the behavior of caching will vary among species, based on specific instinctual survival needs. Many species of animals practice the behavior of caching, including squirrels, chipmunks, foxes, hamsters, honey bees, rooks, weasels, wolves, woodpeckers, scrub jays, mountain lions and house cats.

Cats who live in the wild (feral cats, cougars, panthers, etc.) often attempt to bury uneaten food or cover a recently killed carcass with substrate (grass, leaves, or other ground material) to protect it from spoiling or from being eaten by other animals (Vander Wall & Smith, 1987). The cougar will usually remain in the area near his/her cache for several days, occasionally returning to feed on the carcass (Mitchell, 2013).

Cougars (aka mountain lions) are not the only wildcats who cache. Bobcats will also cover the remains of a large kill with debris such as snow, leaves, twigs or grass and will revisit the carcass and eat again. Panthers will rake leaves and twigs over a carcass to hide the carcass from scavengers. This behavior is very common and is part of a natural and healthy wildcat (Vander Wall & Smith, 1987).

In the video, f109timelapsecaching, an adult female cougar in northwest Wyoming is caching (captured via time lapse video) a mule deer she has killed. The behavior in the video is exactly what our family’s cats look like after finishing their meal. In fact, two of our four cats do exactly what you described in your question. After our eldest cat has finished eating (if there is leftover food) he will attempt to “bury” his meal. Our youngest female also performs this behavior after her meals.

The behavior in house cats may include the cat pawing at the floor, or dragging a front paw on the floor around their food mat, puzzle feeder, or bowl. The cat may become so focused on burying the food that he pushes the food mat/plate around. Some cats may pull a blanket, tissue paper, food mat, clothing, or shoes over their leftovers, if these items are nearby. After the leftover food is buried, the cat will generally walk away calmly.

Why Cats Cache
While there is yet to be any formal papers published on this exact behavior concerning house cats, we do know that many of the instinctual behaviors we see in them stem from their wildcat cousins. All cats are both predators and prey and much of what we will observe in their behavior will reflect this. When people see their pet cats covering their food, they may think it is because he doesn’t like the food, but most likely it is because it is an innate behavior inherited from his ancestors. Even comfy couch cats who have never set paw outside may retain this important feline instinct.

Observing Behaviors
All behavior has its roots and is either learned or innate. Caching is just one example of how we can misunderstand our cats. When we label a behavior, judge it, make it wrong, or make fun of it, we risk creating a chasm of understanding between us and the animals we share our lives with. Caching works for cats and it serves an important purpose. Once we begin to understand this, it can help us gain a new perspective and better understand their behavior.

Amy Martin has studied animal welfare, applied behavior analysis, animal husbandry, and species-specific animal enrichment for nearly 20 years. Throughout her career, her work has centered upon conservation and teaching others how to utilize force-free training, with an emphasis on enhancing the human-animal bond. During her long career at The Audubon Nature Institute, she trained, managed, bred, and cared for a myriad of species, including critically endangered wildlife, domestic livestock and companion animals. Teaching everything from Komodo dragons to children, she educated both the public and her colleagues on how to empower all species through the use of fun, force-free techniques and she has published and presented several papers on these topics over the years. Today, she is the owner of Conscious Companion™ , located in Newport, Rhode Island.