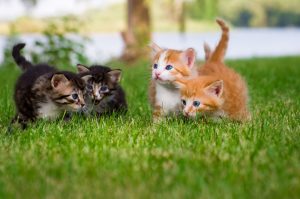 Kittens may have different fathers even though they are from the same litter, hence they may vary in appearance and temperament © Can Stock Photo/IuriiSokolov

Q: I recently adopted two young cats that the shelter told me are littermates. But one is a black shorthair and the other is orange and kind of fluffy, and they’re actually not much alike. If they were really siblings, wouldn’t they be more like each other?

A: Cats from the same litter are not twins or triplets or quadruplets. In fact, while they all have the same mother, it’s possible none of them have the same father. That’s why you can see littermates with different coat colors, patterns, and lengths, and also somewhat different temperaments.

Let’s review the birds and the bees as they pertain to cats. Cats are induced ovulators (Bradshaw, Casey, & Brown, 2012, p.15). That means the queen does not automatically ovulate when she enters a fertile cycle (the way, for instance, human females do). Instead, the act of mating with a tom releases a surge of luteinizing hormone (LH), which causes ovulation. Eggs simply do not mature unless there is copulation (Bradshaw, Casey & Brown, 2012, p.145).

But once is not enough. The queen must have multiple matings to release enough LH to cause ovulation. Three breedings a day during the first three days of the heat cycle will usually get the job done (Eldredge, Carlson, Carlson & Giffin, 2008, p.410). That’s nine possible sperm donors!

Ovulation actually happens about 24 to 30 hours after all that copulation (Case, 2003, p.57). Between three and seven eggs are released during a typical heat cycle, and their trip to the uterus takes about five or six days (Case, 2003, p.58). Fertilization occurs in the fallopian tubes during the journey (Eldredge, et al., 2008, p.411).

Of course, one sperm fertilizes one egg. But a queen who mates with more than one tom has a mixture of sperm in her reproductive tract, and a single sperm from any one of them can fertilize any given egg. Ergo, with perhaps nine possible sperm donors, every kitten in a litter could theoretically have a different father.

Town Cat vs. Country Cat
How often does that theoretical possibility become reality? It depends on where and how the cat lives. Researchers in France studied a group of urban cats and rural cats (about 26 adult males and 35 adult females in each group) and did paternity tests on all 312 kittens they produced (Say, Pontier & Natoli, 2009). Among the city cats, 70% to 83% of litters had more than one father. Among the country cats, 0% to 22% of litters had more than one father. When you parse those statistics a different way, the country toms had a 78% to 100% chance of being the father of all the kittens in a single litter, while the city toms had a less than 30% chance.

The researchers suggested that population density and behavior pressures accounted for the results. The country cats lived in the village of Barisey-le-Côte in rural northeastern France and were owned cats who spent their days free-roaming the countryside. Both males and females were highly territorial, and the queens in season were monopolized by just a handful of resident males. Outsiders, and even the younger local males, rarely got a chance to mate.

The city cats were a single colony of strays living on the grounds of a hospital in the city of Lyon, where they were fed by hospital staff. The population density of the city cat colony was more than nine times greater than that of the country cats. The researchers speculated that in such dense living conditions, with so many males nearby, trying to monopolize a single female was simply too much work. Instead, the city toms tried to mate with as many females as possible.

This study makes it sound as if the males make all the decisions about who mates with who. But researchers in Japan found that the queens often have the upper paw (Ishida, Yahara, Kasuya & Yamane, 2001). They observed eight feral queens in season, who were courted by between 9 and 19 males but ended up mating with 3 to 9 of them.

The top criterion for rejecting a male was that he was a close relative (distant relatives were accepted). But comfort and experience—among the queens—also seemed to matter. Older and lighter females tended to accept copulation more frequently than younger and heavier females.

About the Author
Beth Adelman is a feline behavior consultant based in New York, New York, and is a member of PPG’s Cat Committee. She is a frequent speaker on feline behavior topics at industry conferences and public events.