Feline Litter Box Problems: The Needs of the Many 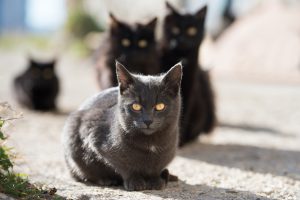 A recent study found that in multicat households where one cat was spraying, every cat in the home was stressed and not just the one (or ones) engaging in the behavior © Can Stock Photo / Vapi

The Star Trek character Spock once said: “Logic clearly dictates that the needs of the many outweigh the needs of the few. Or the one.” (Meyer, 1982). This movie quote popped into my mind upon reading the findings of a new study into stress levels of multicat households experiencing toileting issues. Stay with me on this – it will all become clear!

I’m sure most cat behavior consultants would agree that the number one behavior problem reported by cat guardians is inappropriate toileting – both urine spraying and toileting outside the litter box.|

As behavior consultants, we know that, when all potential medical issues have been ruled out by a veterinarian, the most likely cause of inappropriate toileting is stress.

Any number of stressors in the cat’s environment could be involved – alone or in combination – including but not limited to: a new addition to the household (human or animal); the departure of a member of the household (human or animal); a physical change such as moving house or renovating the existing one; the appearance of a new cat in the extended territory; a change to routines and a decrease or change in available resources.

And what we would normally do is focus on the cat that is doing the inappropriate toileting and work out what is needed to make that cat feel safe and secure again. Lower the cat’s stress levels and toileting problems should eventually be resolved.

However, a new study has revealed that perhaps we should widen that focus to include all the cats in the household (the many, not the one – get it?) and assume that, if one cat is stressed, they are all stressed – and it is the environment that needs the primary focus, not the individual cat. 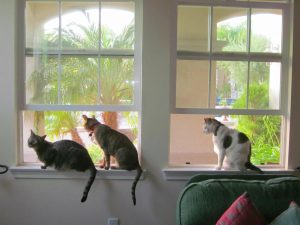 The more cats in a home, the more resources are needed so the cats do not have to compete for their preferences, thus lowering resource-related stress levels © Susan Nilson

Brazilian veterinary behaviorist Dr. Daniela Ramos and her colleagues published the findings of their study earlier this year. Their project involved examining the level of stress hormone present in the feces of cats from multicat households.

These households were specifically ones experiencing either urine spraying or “latrine issues” (i.e. toileting outside the litter box, but not spraying). The feces of all cats within each household were examined, regardless of whether they were the ones carrying out the unwanted behavior.

Just to clarify the difference between spraying and latrine issues: Urine spraying is generally territorial marking behavior and usually performed on vertical surfaces. The term latrine issues refers to otherwise normal elimination of urine or feces but in places other than the litter tray.

Both are very distressing situations for cat guardians and are frequently cited as reasons for relinquishing cats to shelters and rescue organizations.

Both are often complex problems, particularly in multicat households, with a solution requiring a good deal of detective work, a range of modifications, lengthy periods of time and very dedicated guardians. But the interesting thing about the Brazilian study is that it calls for a much more holistic approach to the problem, rather than only focusing on the individual cat carrying out the behavior (Ramos et al., 2020).

What Dr. Ramos and her team found was, in households where urine spraying was being displayed, all cats were stressed. There was no difference in the stress hormones detected between the cat that was carrying out the urine spraying and the rest of the cats in the household.

What’s important, from a behavior consultant’s point of view, is that, regardless of whether the toileting problem is urine spraying or latrine issues, all cats in the same household had similar stress levels in terms of the stress hormone in their feces. In other words, the individual cat carrying out the behavior was not more stressed than the rest of the household and that they were instead all similarly stressed.

The cats of each household were also put under an observational test which supported the fecal findings – while those in the spraying households were more restless than those in the latrine issues households, there was no difference between cats of the same household (Ramos et al., 2020).

In an interview on the study’s findings in June of this year, Dr. Ramos remarked that “…giving it some thought and digesting the results, this now makes sense as stressors can potentially trigger cats known to urine spray to spray while triggering non-sprayers to perform other behaviours linked to stress but not as clear as spraying behaviour.
Other behaviours may include aggression and active avoidance of the stressor(s).” (International Cat Care, 2020).

In other words, this study indicates that we should not assume that it is only the cat carrying out the inappropriate toileting that is stressed. The other cats are likely to be just as stressed and perhaps exhibiting that stress in other ways which are not as immediately apparent as urine or feces appearing where it shouldn’t.

Cats, as we know, are very good at hiding their emotions due to their inbuilt instinct to hide anything which may show them to be vulnerable.

What we can take from these findings, then, is that we should be undertaking a holistic approach to the problem, focusing on the environment shared by all cats in the household. Our aim should shift from “What’s upsetting this cat so that he/she feels the need to spray or toilet in inappropriate places?” to “What is it about the environment that is upsetting these cats?”

Environmental Change
Part of the problem could be the stress caused by the actual inappropriate toileting behavior being carried out by the individual cat. Just as humans find the smell of cat urine and feces offensive, cats and their keen sense of smell may not be overly happy with it either. But the smell of the inappropriate toileting did not start the issue – there had to be something that came before – and the environment needs to be looked at in close detail.

So, apart from cleaning with an effective enzyme-based product made specifically for the problem, positive changes to the environment need to become the priority. These might include:

Limiting Change: Determine any changes to the environment and try and remedy them. For example, if there’s a strange cat hanging about, find a solution by talking to neighbors or council authorities to see if the cat can be kept off the property. If the resident cats are indoor only, place screens or other preventative measures to stop the visiting cat being seen until a more permanent solution is found.

Try to limit any big changes to the physical environment of the house (renovation, new furniture) until the toileting issues have been resolved and then seek help on a smooth transition for such things in the future.

Pheromone Therapy: Diffusers emitting synthetic versions of cat pheromones may help the cats feel calmer. These can be found online and in pet stores and there are versions made specifically for multicat households.

Adding More Resources: I, for one, think you can never have too many resources in a multicat household! Try adding more choice of food and water stations, litter trays, tray and litter types, resting spaces, hiding spaces, perching areas, raised areas, toys, scratching posts and mats.

The more cats you have, the more resources you need. And the more choice you provide, the less cats have to compete for their preferences and the lower their resource-related stress will be.

Adding More Enrichment: If the cats are indoor only, added space can be found by going up. Consider, if practical, creating a cat “super highway” where the cats can move around the rooms at height via various shelving, platforms, steps, etc. Ensure there are plenty of safe entry and exit points and various resting spots along the way.

If the cats have safe outdoor access via a contained garden or cat enclosure, consider further enrichment in those spaces too. Ideas include an herb garden with cat-safe plants, a dedicated outdoor latrine area in a secluded spot where the “digger cats” can spread some dirt around to their hearts’ content, climbing structures, insect-attracting plants and water fountains.

Apart from the physical environment, enrichment can be taken further to include human interaction, but guardians should remember that all cats are individuals and it is important that care and attention is individualized for each cat in the household.

Offering predictable routines for feeding, play etc. and sticking to them as much as possible is also an important measure in lowering stress levels.

While these modifications are happening, the cats’ guardians should be encouraged to be patient, move forward at a slow pace and give it time. If the findings of Dr. Ramos and her colleagues are anything to go by, and harmony within the environment is restored for all of the cats, then hopefully the toileting issues will decrease and eventually diminish altogether.

It seems Spock was right: looking after the needs of the many can be a logical solution, even in the world of cat behavior.

This article was first published in BARKS from the Guild, September 2020, pp.20-22. For more great content on all things animal behavior and training, you can sign up for a lifetime, free of charge, subscription to the digital edition of BARKS from the Guild. If you are already a subscriber, you can view the issue here.