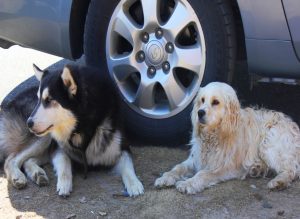 Free-roaming animals are unaccustomed to restraint, so crates, doors, leashes and fences are foreign concepts to them when they are brought into people’s homes to become pets © Yvette Van Veen

Fourteen years ago, a series of serendipitous events led me toward a career working with feral and roaming dogs. At that time, free-roaming dogs were not a common discussion topic and the prevailing notion was that these animals were not capable or fit to become pet dogs.

The majority of the dogs I initially came into contact with came from rural areas of Ontario and Quebec in Canada. Over time, they also included dogs from Taiwan, Romania, Mexico and Africa. While research existed on how feral animals behaved in remote areas, the means with which to re-introduce them into homes was rarely mentioned, if at all. During one of our first puppy play sessions I can distinctly remember watching a group of young puppies viciously attacking one another and thinking: “This is not what Dunbar said would happen.”

There are differences between terms such as feral and roaming. Feral means that members of a species or offspring have escaped captivity to live in the wild without human intervention. Not all dogs wandering the streets or surviving in rural areas are feral. Many dogs roaming freely are owned. While they may wander, they have a home to return to and a legal family. We call them roaming dogs. Strays, by contrast, are not owned. Abandoned or lost, they previously had a family and perhaps even a home.

Ownership and reliance on humans reflects upon the dog’s socialization opportunities. A lost dog with a history of living with people in a home has a different set of experiences than a dog that is born in a remote, sparsely populated area, never having lived with people. The dog that is never in proximity to people is rare indeed.

Rescuing a stray dog is not the same as rescuing a feral and it may be impossible to determine the dog’s history unless residents and rescuers can provide relevant information. Feral, roaming and stray dogs are all domesticated dogs. Living in the wild does not change the species to which these dogs belong and they are not wild dogs.

The typical feral dog is difficult to describe. Natural selection presents a tremendous amount of variation. Each geographical location often has natural and artificial barriers that limit gene flow. This can affect the morphology or appearance of dogs living in one population versus another. For example, the dogs of Waskaganish, Quebec curiously have a high incidence of dwarfism. Residents in various areas import dogs from distant areas from time to time so even remote communities are influenced by the same breed fads present in urban society.

Behaviorally, one can expect to see significant variation. Behavior traits are a combination of the genetic material available and the impact the local culture has on a dog’s behavior. Animal control ordinances often act to cull and remove problem dogs.

The dogs from Taiwan, for example, have all come to class with their ear clipped. A clipped ear means that the dog has been deemed worthy of living. In some areas, urban notions of dog control means that many of these dogs are chained so are no longer free to roam. For some, this means lack of accessibility to food. Others are unable to escape predators.

Differences also exist between littermates. Females often mate with multiple male dogs, resulting in littermates that are half siblings. One prolific breeder can spread common traits through a population. Rescuers often name dogs so when they say, “that’s one of Ruby’s pups,” the statement carries the implication that the dog behaves in a certain manner.

There is no one description that fits all free-roaming dogs but if there is one common attribute it is that they are adaptive survivors. Those who adapt are those who survive. The environment provides a continuum of socialization where some have more opportunities than others to become comfortable around people.

When we choose to rescue and work with these dogs, we are transitioning them from one environment to another. We are asking them to adapt. In his article Feral Animal Studies in Animal Science: the Uses and Limitations of Feral Animal Studies to Contemporary Animal Science, McBride points out that there are two possible outcomes. The animal either adjusts or gives up. He states that chronic welfare problems are due to an animal’s inability to adjust to environmental conditions.

Once we make the choice to move an animal from being free-roaming to being a pet in a home, it is our job to make that transition as easy as possible. Ethically, we are duty-bound to assess each animal and to ask if a transition is in the individual’s best interest or not. Once we do make the decision to move a dog, there are still issues that commonly arise.

Free-roaming animals are unaccustomed to restraint. Crates, doors, leashes and fences are foreign concepts to them so introduce each new form of confinement with the knowledge that it will be a difficult adjustment.

Simply throwing a peanut butter stuffed toy into a crate may work for a biddable purebred puppy but it will generally not work for a dog who was born free.

Immediately apply desensitization and counterconditioning to all dogs who are learning to adjust to confinement. Gradually introduce on leash encounters, first from a distance and gradually moving closer. Pair these encounters with high value food treats to create positive associations toward on leash dogs.

Stray dogs, abandoned into rural areas by urban residents are often not welcome in many communities and dogs may face aggressive and violent human behavior, thus forming negative associations. Restore trust and introduce new people slowly. Plan thoughtfully and gradually introduce gestures such as raised arms or sounds such as yelling to assess and prevent fearful reactions.

Be cognizant of the fact that not all rural dogs roam free. As animal control ordinances spread into these areas, they may encourage chaining. Along with the expected chain rage, tethering exposes dogs to predators and prevents them from fleeing to safety. Females in heat are especially vulnerable and attract males that pester them during heat cycles. Unable to retreat, they go through periods of constant anxiety and sleep deprivation.

Roaming provides the opportunity for animals to obtain food via scavenging, hunting small prey, catching fish and even foraging for berries. Batten down the hatches and create strong self-control around food. Be aware that small animals in the home may have formerly served as food source. Long-term supervision and management may be necessary. Always incorporate resource-guarding prevention as a precautionary step.

Think of each new experience as an opportunity to create a positive first impression and do not try to trick dogs into scary situations, a move that typically backfires. For example, showing and offering treats before trimming a nail often results in a dog that mistrusts treats.

Puppies often are separated from littermates prior to seven weeks of age due to necessity. This can negatively affect bite inhibition. Use hand feeding as an opportunity to teach gentle jaw pressure and provide socialization experiences with a well-adjusted dog. Adjust these play groups to accommodate the diversity of behavior.

Some puppies will have temperaments on par with well-behaved purebreds. Others will come to class already gunning for a fight so select potential playmates wisely. Do not be afraid to jump to counterconditioning immediately if the dog displays signs of resource guarding, touch sensitivity or other problems.

Fortunately, one commonality holds true regardless of the dog. All dogs learn the same way and the laws of learning work on all dogs. At the end of the day, all you can really do is look at the individual, understand what the past may have been and create a solid training plan.

The better we apply training techniques, the better we make up for deficits in the dog’s history. I suppose the main difference between roaming dogs and those that are pure bred is that they do not have the advantage of whelping pens, ultrasounds, enriched playpens and daily handling. Most importantly, they do not have the same socialization opportunities.

So if a free-roaming dog roams into a classroom, treat that dog like an individual. The behavior of these animals is diverse, encompassing dogs from one spectrum to another. Be open to seeing the dog before you.

Yvette Van Veen PCT-A is dog behavior consultant and owner of Awesome Dogs. She is also a long-time columnist and multiple Dog Writers Association of America award nominee, and currently writes a regular column for The Toronto Star. She has worked with rescue dogs for more than 14 years, focusing mainly on rural, roaming and feral rescue dogs from communities throughout Ontario and Quebec, Canada. She’s also the creator of Awesome Dogs Shareables, an educational meme site providing resources and training tips in small, shareable formats.