Force-Free: Are You Getting the Correct Message Across?

Recently I learned of a trainer whose specialty is working with hunting dogs. For the purpose of this blog I will call him Bob, mostly because I like that name, and I like the trainer.

The majority of hunting dog trainers use traditional methods, but several years ago Bob gave up the methods he was most familiar with and formally studied modern methods based on reinforcing desired behaviors.

Today Bob identifies himself as a “positive” trainer meaning that he does not use a shock/choke/pronged collar and does not impose fear, pain or intimidation upon the dogs he works with. His emphasis is on positive-reinforcement of desired behaviors…as is mine. 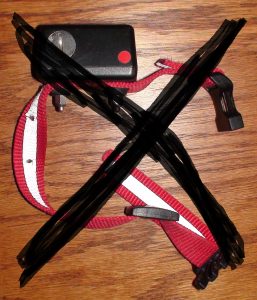 “No shock, No prong, No choke”

It sounded to me like the PPG definition of “force-free” and I was encouraged.

As a member of two force-free trainer organizations I have had conversations with others who genuinely want to engage the hunting community and invite them to explore our methods, as Bob did of his own iniative. Bob even discovered that his positive methods yield faster results that maintain very well in the field, under real-life conditions.

By virtue of my involvement on the PPG Advocacy Committee I am especially eager to connect with trainers who specialize in fields that rely upon traditional methods, so I reached out to Bob. We seemed to have a lot in common and I invited him to investigate PPG.

Bob replied very nicely that he was reluctant to do so.
I wondered “Why not?”

From my perspective it seemed that Bob had already crossed-over, as we like to say. Most of us made the same choice to switch.

I asked Bob to educate me about the obstacles blocking him from joining PPG and possibly have a powerful voice in the hunting community by virtue of BARKS magazine or his own PPG blogs .  We exchanged email for a few days and Bob generously offered me his heartfelt honest feedback. It became clearer to me that we had a “messaging problem” as Bob put it.

Bob explained he knew several PPG members that tended to be “abrasive in their approach to canine advocacy” and “got pretty heated toward others who disagreed with them.” He pointed out how inconsistent it is to approach dogs with a R+ attitude and people with a P+ attitude.

Hmmm? I agreed that PPG members ought to be professional and that individual conduct may reflect poorly on the organization, but not actually represent it.

I explained that I have personally heard PPG founder Niki Tudge state on several occasions how important it is for each of us to be respectful of others and that PPG was founded to be an inclusive organization that educated and informed, not to personally attack or judge. In fact, an ethics committee exists to oversee member conduct and I invited Bob to consider that option, if he thought it was warranted.

Bob also pointed out that some highly respected trainers and behavior experts do not rule out punishment, citing Dr. Susan Friedman’s Behavior Hierarchy model. I heard Temple Grandin, Ph.D. and Dr. John Ciribassi state they would not rule out the possibility of using a shock device as a last resort. The example given was that of a dog chasing livestock, after all other options had failed. Their answer was in response to my direct question. (1)

I suggested to Bob that all four quadrants of operant conditioning were available to force-free trainers…just not aversive methods that caused intimidation, fear or pain.

When I teach a jumping-bean puppy to stop climbing up my leg scratching me for attention, I do so by withdrawing myself from the puppy (negative punishment) when he does so, and rewarding (positive reinforcement) alternative preferred behaviors. 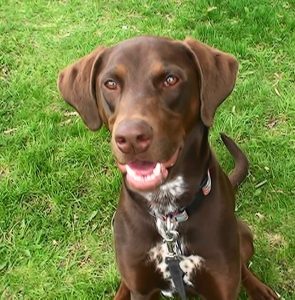 “I sit for attention!”

The punishment is benign and helps the puppy learns that jumping on people makes them go away, while sitting gains their attention. Punishment is not forbidden, per se, and I am not using an aversive method or equipment.

It still sounded to me like the PPG definition of force-free.

Another roadblock in the force-free definition was in the prohibition on use of physical force or compulsion. Bob was the first to say that he would not choke a dog and push its butt to the ground to teach a sit, and neither would I. He made it clear that he does not use that kind of force or compulsion. 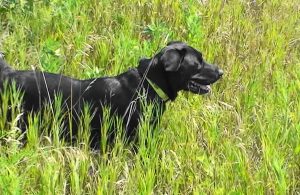 There were times, Bob explained, when he needed to be able to help a specific dog in a specific situation by using a long lead and preventing a dog from breaking a (trained) position, rushing ahead to grab a bird. Ultimately he may have to turn and walk the dog away, as gently as possible, but still using force and compulsion.

I thought Bob’s explanation was reasonable and within the realm of how I interpret force-free. It reminded me of “reactive” dogs I have worked with.

First I teach fundamental skills, then I began desensitizing and counter-conditioning exercises with a neutral decoy dog in an environment where I have some measure of control. Lacking a training facility to work in I must go to parks and neighborhoods. I try very hard to keep the training dog from going over threshold.

Sometimes things occur that we cannot predict, as when a neighbor’s dog scoots out the front door and rushes the dog one is working with. As such times I would use the emergency U-turn suggested by Dr. Patricia McConnell and would have to turn and walk the client dog away, most likely with some force and compulsion if the dog was going over threshold.

Doing so would not make me feel that I have violated my force-free principles, but it would make me plan more carefully in future.

Bob’s final words on the matter were “In effect, the PPG seems to me to be RESTRICTIVE, not INCLUSIVE. If I am wrong, then I think you guys have a messaging problem.”

The communication process consists of a message, a sender and a receiver. As the sender I may think that I am delivering a message as intended, but what if the receiver gets a different message? In that case, I think it is the responsibility of the sender to fix the problem.

Just one day after our email conversation the “Tiny Pig Slayer” petition to National Geographic splashed across social media, with scores of daily posts. I recognized many contributors to the conversation as PPG members.

The majority of posts sounded professional to me and focused on the issue of California law relating to the treatment of animals, and appeals to contact appropriate enforcement and oversight authorities.

Then I read a few posts that sounded angry, abrasive and more like personal attacks. I wondered what Bob would think of those?

As PPG members we have a right to speak for ourselves, but the words and tone we use will ultimately reflect on the organizations we belong to. I understand and share a passion for animals and will speak out against things that I interpret as cruel and abusive, but we can do so in a professional manner.

If there is a messaging problem within the force-free community then I will use my conversation with Bob as a learning moment and try even harder to represent myself, my business and the professional organizations I elected to join in a manner that is consistent with the code of ethics and guiding principles I embrace.

Mostly, all I need to do is listen to and watch Niki Tudge as an example to follow.

(Bob had an opportunity to review this blog before publishing, and is still considering PPG.  We continue to discuss this in a civil and professional manner.)