From Bait Dog to Happy Pet 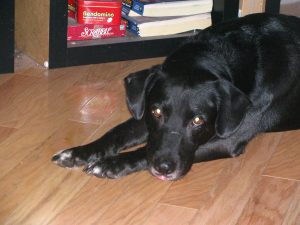 He is tall, dark and handsome. His name is Jacob. And he is a five-and-a-half year-old black Labrador retriever. Jacob was my fourth foster through Labrador Retriever Rescue of Florida and was just over a year old when I began fostering him. One of my first duties as per the rescue organization was to take Jacob to see Angelica Steinker at Courteous Canine, Inc. DogSmith of Tampa.

Jacob was rescued in Florida’s panhandle. When found, he was full of cuts and bites. At the vet, he was completely shaved down in order to assess the damage. Then came shocking news, the veterinarian said Jacob had been used as a bait dog. Bait dogs are used in illegal dog fighting to entice and “train” a fighting dog to bite, maim and kill. Completely stunned, we were not sure if he would be adoptable, so rescue wanted Jacob assessed by a dog behavior consultant.

Steinker’s assessment showed a dog who had a high level of anxiety. She gave us relaxation techniques to use with him, intended to help reduce Jacob’s anxiety. Jacob loved his massage homework and seemed to mentally thrive from every session. Steinker also coached us on some basic training and switched Jacob to a harness. He made progress quickly with lots encouragement, love and protection. It was critical to Jacob’s recovery that he felt safe at all times, so we started out by going to the dog park and immediately leaving once a second dog entered. Initially the increase in anxiety was palpable and I could feel his fear that he anticipated being attacked. Gradually, with lots of positive reinforcement, his fear subsided. I continue to be extremely careful about whom Jacob interacts with but today he has dog friends and is able to play with them. 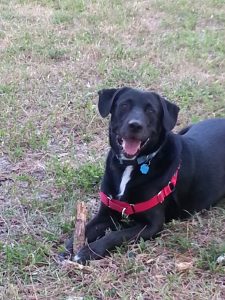 As Jacob’s recovery progressed he began to demonstrate what I call “dog hero” behaviors. One day, a tornado was in the area. Jacob woke me up and led me to the glass doors. I noticed the sky was green and knew instantly what was coming. I grabbed blankets and a pillow and we hunkered down in the hallway. Jacob refused to lie down and instead positioned himself so that his body shielded mine. Not only had he alerted me to the storm, he also insisted on body-blocking any danger. Only once the tornado passed did he lay down. I then knew we were safe, and I knew he was mine and officially adopted him.

A year later, Jacob was managing well at the dog park, with my micro managing all interactions making sure they were happy and positive for all dogs involved. But he still did not feel safe enough to roll onto his back. It wasn’t until about two years post rescue that he turned onto his back one day. What a joyful moment for both of us!

Today, at the age of five and a half he is a very happy boy. Dog parks do not bother him, though with new dogs his guard is up, but he has no interest in fighting. He even has “girlfriend” whom he flirts with. He’s happy to approach a new dog in order to play, or at least to get acquainted. He’s been boarded many times and has done well each time. While I believe, he knows he has been rescued and is forever thankful for it, really it is I who should be thanking him for the joy and peace he has brought into my household.

To learn more about canine behavior, dog training and so much more, head to Tampa, Florida on November 11-13, 2015 for the Pet Professional Guild’s inaugural educational convention, the Force-Free Summit – Reaching for a Higher Standard.