Get the Best From Your Pet

I read a great quote the other day from a book titled Bringing Out the Best in People by Aubrey Daniels. Here he is talking about positive and negative reinforcement: “It is important to know the difference, because the characteristics of performance generated by each are very different. Negative reinforcement generates enough behavior to escape or avoid punishment. The improvement is usually described as “just enough to get by.” Positive reinforcement generates more behavior than is minimally required. We call this discretionary effort…” 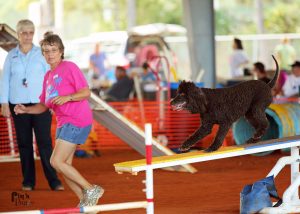 In the world of behavior, negative reinforcement involves the removal of an unpleasant stimulus when a desired behavior occurs. That is kind of like to old joke, the beatings will continue until morale improves, right? You or an animal can learn this way, but you get a minimal effort. Just enough to avoid having the punishment return.

In the world of behavior, positive reinforcement occurs when a reward, sometimes called a reinforcer, is given for a specific desired behavior. Positive reinforce creates a bigger effort on the part of the learner. Better efforts bring bigger, better and more frequent rewards. Who doesn’t like that?

Certainly, both these methods work.  It is up to the individual to make a choice about training methods.

My personal choice for training is positive reinforcement. I’m all about creating a relationship with my dog based on trust and understanding. 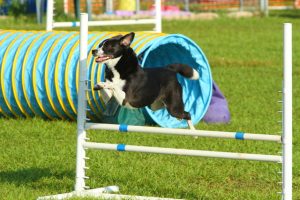 Rio gives a big effort thanks to positive reinforcement.

Training using positive reinforcers does take a bit more thought on the part of the trainer. You have to understand what is rewarding to your dog. It can be food, toys, pets and attention. Sadly some dogs find the removal of attention reinforcing. It is difficult for us to understand, but human contact can be unpleasant for some animals. So withdrawal of attention can be rewarding too. This is common with fearful dogs.

I have had several conversations recently where people are using punishment for behavior problems. If punishment worked, prisons would be empty! Punishment increases stress which often has a negative effect on behavior.

Dog training is both a science and an art. If you hire a trainer or “behaviorist”, check their credentials. They should understand how behavior can be changed and modified without coercion.