Get Your Paws Off My Plate! 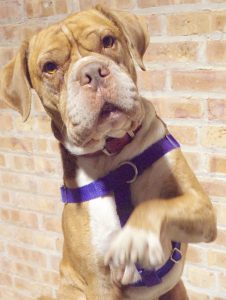 It was my first day on the job and I was sitting in the cafeteria at a table with other new employees. This was an exciting time, not only beginning a new job, but also the opportunity to get to know more people. As I was attentively listening to the woman’s conversation on my left, I couldn’t help notice that the gal on my right was taking food off my plate and eating it. As I whipped my head around in her direction, she smiled at me, like there was nothing wrong and I turned back to the conversation with the other woman, all the while a bit stunned that a stranger would have the gall to take food off my plate. But that was not the last of her antics, as I happened to catch her taking another French fry. This time I turned with a cold hard stare and held her gaze, for what seemed like forever. Didn’t she read my body language? And she smiled again like we were best buddies and continued to ignore me. When I turned back to the other conversation, needless to say, I was getting furious. The nerve of this woman taking food off my plate. Why didn’t she buy her own food or pack a lunch? But when I caught her taking another fry I lost it. I picked up my fork, yelled “Hey” and stabbed her hand as she reached for my food! Oh now I had her attention!  And she apologized saying that she didn’t think it was such a big deal, but couldn’t believe I reacted so violently towards her.

Okay, it wasn’t my finest hour and strangely, she eventually became one of my friends, but now many years and careers later, when I am called to a client’s home because their dog is guarding something, I always remember what if felt like when my oddball friend took my food. If I had been a dog, I might have been hauled off to the shelter, put to death or worse, been the subject of a certain celebrity trainer’s video where he’d jab me in the neck while I’m eating my dinner just to see my reaction!

Yes, I understand the seriousness of a dog that guards food or other coveted items, but the idea that it’s perfectly okay to take things from an animal and expect a higher standard of impulse control than you would from a human is just a bit off!

There are many ways to show a dog that it’s fun when people approach his food (toys, kleenex and other coveted items) because he will get something  WAY better than what he has, and sometimes he’ll even get his things back. There are many qualified force-free trainers who can set up a program that builds a positive history such that your approach is good news to your dog. Of course you could just approach your dog while he’s eating and jab him in the neck, but what do you think he’ll do the next time you’re near his “stuff”?

Many dogs in homes are shipped off to shelters, or never make it out of the shelter because they’ve been labeled “resource guarders” and yet who among us, would tolerate the antics from strangers or even loved ones if they invaded our dinner plates? I know what I’d do!