First impressions are often lasting ones and so it was with my first behavior case involving a two-year old Australian Shepherd named Ranger. He was in the custody of a breed rescue and was deemed beyond hope. Ranger was destined for euthanasia due to behavior problems that were imposed upon him through no fault of his own.

Ranger began life as a puppy with an elderly lady who did not exercise, train or socialize him. He was not even allowed outside to relieve himself. By his second birthday Ranger’s behavior deteriorated so much the lady gave him up.

When Ranger’s death sentence was declared to his foster family they refused to give up on him and appealed for help. As a rookie trainer with no certification I accepted his case knowing we had everything to gain and nothing to lose. 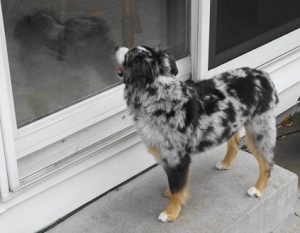 Looking into an uncertain future

When Ranger first met me he barked, lunged and retreated for 20 minutes; all the while I tossed bits of meat to him while assuming the least threatening body language I could muster. He gradually settled down and after 90 minutes Ranger learned Touch and Look. It was the beginning of a long and difficult process.

Nicole and Kyle were experienced fosters but Ranger was the most difficult dog they worked with and they were approaching their own limits with him. I concluded my final session with Ranger in November and he was well on the way to a normal life, but I wondered if I had done enough.

The rescue group was happy with Ranger’s progress, but the foster family and I agreed that if Ranger was adopted and subsequently returned, he would likely get no second chance. His death sentence had been suspended, not repealed.

On December 1st, 2012 I was invited to attend while a family met Ranger for potential adoption.  I accepted the invitation but did not know what to expect.

It was unusually warm and the temperature remained in the mid-50s well after sunset as I made my way along a country road to visit my little friend. There was light drizzle and headlight glare blinded me from time to time as I travelled. I could see the road ahead no more clearly than I could see Ranger’s future.

Had I correctly assessed him? Had I selected the correct training exercises and behavior modification? Had I coached the foster family long enough to continue in my absence? Would this adoption be successful, or would Ranger find himself rejected and doomed at last?

I parked at the curb and slowly crossed the lawn listening for familiar frantic barking. All was quiet. I paused at the door and asked myself “Should I knock or ring the doorbell?” wondering how Ranger would respond, and how that response might affect his future. It seemed every little detail was critically important.  I decided to knock.

The door opened, Nicole invited me inside and I peered across the room wondering if Ranger was bracing himself against the sudden arrival of a scary intruder, seeking shelter, trying to drive me away to reduce his fear.

What I saw was a strikingly handsome little guy, bounding and bouncing his way across the room in happy anticipation, stopping at my feet where he looked up at me with a big toothy smile. I automatically knelt down and began offering my usual string of calming signals. 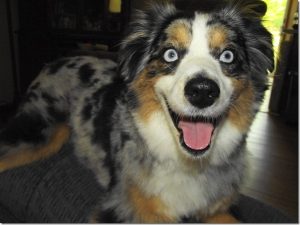 Ranger had no time for that and spun around, offering me his posterior as he looked over his shoulder at me as if to say “Are you going to rub my butt, or what?” I rubbed his wiggly butt, of course!

I walked to the living room to greet Kyle and introduced myself to the potential adopters. Sitting on the floor I meant to offer myself to Ranger while I joined the conversation. Ranger hopped up on a chair, laid his head on the arm rest and gave me abundant happy kisses while I declared out loud, “What a confident and happy little guy you are!”

Turning to Nicole I praised the work she and Kyle had done and how well-balanced and emotionally stable Ranger was.

Almost as if on cue, he hopped down from his perch, bounced across the floor and hopped up on the sofa where his potential adopters, Jim and Tom, were seated.  There he found a safe and comfy lap and cozied up to Jim, as if to demonstrate my point. It had been a long and difficult journey, but the way ahead was clearing and I knew Ranger was ready for a home of his own and a holiday season worth celebrating.

Jim and Tom asked smart questions about Ranger’s past behavior and how to cope with setbacks. We discussed his rehabilitation process and I demonstrated his many training skills. I discussed what to expect during the transition period following adoption and what to do if there should be any stress-induced regression in his behavior.

Moments later Jim and Tom prepared their vehicle for Ranger and he hopped into a kennel, ready to go to his new home in the country where he would live with another Aussie on a farm.

I stood on the doorstep with Nicole and Kyle as tears welled in our eyes and the drizzle changed to a steady warm rain. It felt as if all the dogs in Heaven were shedding tears of joy, washing away the bittersweet tears of those who struggled to save Ranger in the fall of 2012.

As the vehicle drove into the darkness Ranger offered a few barks in farewell. Returning to my car with lighter steps and a joyful heart I offered my own farewell to a strikingly handsome little Aussie who touched my heart forever.

(Ranger continues enjoying a wonderful life with his new family)