The Curious Case of the Haunted Room 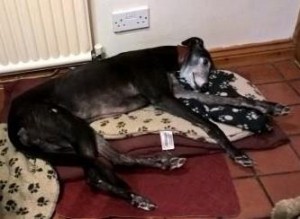 Jo in the sanctuary of her bed, the only place she feels safe.

Sometimes, however many questions we ask, it’s impossible to get to the bottom of just why a dog has developed a “weird” behaviour.

We can see the current antecedents, but what caused it to kick in originally?

In one of my recent behaviour consults I arrived to see a dog totally spooked by one room – the kitchen. All doors from outside and from the other rooms in the house led into this kitchen, so the only way to avoid the room would for greyhound Jo to stay outside.

One day she had simply refused to go in the door. Maybe if it had been on video and watched carefully we may have some clue. It could have been a sound. Her elderly lady owner, I will call her Mary, can think of nothing that was different that particular morning to any other mornings she had taken her Jo out for walks over the year since she had come to live with her.

Here is the story I wrote when I came home:

Six weeks ago greyhound Jo was a happy dog, if somewhat quiet and sensitive. She is a six-year-old ex-racer who has lived with Mary for over a year now.

Then, on that morning six weeks ago, Mary came back from their usual morning walk and Jo simply stood outside the back door and refused to move. Why this happened is anyone’s guess. So far as Mary can remember there was nothing out of the usual in the house or in the doorway, and nothing untoward had happened on the walk.

How Mary reacted was, she admits with hindsight, unfortunate and could have made things a lot worse. She became cross and shouted at the sensitive dog, then tried to drag her in by her collar – finally lifting her and forcing her through the door. Things have gone downhill since then.

Fortunately the lady knew what she did was the wrong way to go about it. She felt bad and she didn’t get cross again. She has since tried to cajole the dog through the door, unsuccessfully. Now she shuts her out and sometime later when she opens the door the dog flies in. Hugging the wall, she shoots right round the edge of the kitchen until she gets to her bed in the far corner. For some reason she feels completely safe in her bed corner as you can see from the photo.

When Mary comes back after having left Jo alone at home, the dog won’t now go further to greet her than a few feet from her bed where before she would run over to her happily. As Mary approaches her she now turns back and gets on her bed once more. If Mary goes in the sitting room, Jo will now no longer go in with her but will creep in to join her later. When Mary gets up to go back into the kitchen, Jo goes no further than the door. Front feet over the threshold, back feet in the sitting room, she hovers, gathering courage to make her mad dash for her bed, just as she does at the other entrances.

Mary just leaves her now and eventually she will hear the dog suddenly shoot around the edge of the quarry-tiled room to the safety of her bed. Jo has left nail marks on the floor as she skids in her frantic desperation to get there. She has rugs on the floor and has tried moving them about, to no avail.

It is like this room is haunted in some way. The dog has built up a fearful ritual of waiting/hovering in doorways and then making a dash round the edge of the room for her bed, as though there is an invisible monster lurking in there ready to pounce on her. Our biggest clue is that most of Jo’s odd behaviours only take place in the presence of Mary. The cleaning lady looks after Jo sometimes and she is fine with her. She runs to welcome her at the door and displays none of these behaviours when she takes Jo her own house.

I tactfully enquired whether Mary, to her knowledge, was suffering from a new illness or whether she had been feeling unwell recently, but no.

Apart from when she’s on her bed where you can see she is totally relaxed, Jo also feels safe in the garden which is the only place where she ‘lets her hair down’ and rushes about – leaping over the pond and creating her own mini racecourse! She is happy to have Mary with her when she’s outside. Indoors there is just one room she feels safe with the lady – a little office – a room that doesn’t lead directly off the kitchen.

Because Jo reacts in a much more relaxed and enthusiastic way to other people she knows than she does now with Mary, it is clear that for some reason the problem is specific to the lady in conjunction with the room.  I am sure that, apart from the manhandling when she forced her into the house that first time, she is never unkind to her dog.

We need a two-pronged approach. First to ‘exorcise’ the room of its demons so that it represents good stuff and not fear, and we need to rebuild Jo’s trust and respect for the poor concerned lady. All force must be abandoned so Jo can make her own choices, and Mary will now be liberally using food for to exorcise the room – sprinkling and hiding tiny tasty bits all around the kitchen-diner and then keeping well out-of-the-way while Jo forages and hunts.

Mary will also use food whenever Jo comes near her, she will toss her food when she is facing her but not moving and feed her when she follows her – which she is happier doing than a frontal approach. Mary will use food whilst doing lots of going in and out through doorways with Jo – starting with the comfortable door into the tiny office. Fortunately Jo likes her food.

Even though we may never get to the bottom of ‘why’ this all started, I’m sure if Mary is able to do these things and for long enough, she will re-build her old relationship with her lovely greyhound who then will no longer be a dog who refuses to come in, and the room will no longer be ‘haunted’.

As with any sudden change in behaviour, it is also important to have the dog checked over by the vet to make sure there is nothing physical going on. Mary took her the next day and she was fine.

A couple of weeks after my visit: Great news.  Mary has been following the plan closely – and Jo is back to her old self. The room has lost its ‘ghost’. Jo walks in and out happily. There is no more hanging back at doorways, no more making a dash for her bed. When the lady comes home, Jo runs to greet her like she used to and she and the lady are once again enjoying one another’s company in the house.

I wonder what it was all about. We will probably never know.

For more of my stories, please go to my website www.dogidog.co.uk

To learn more about working with fearful dogs and so much more, head to Tampa, Florida on November 11-13, 2015 for the Pet Professional Guild’s inaugural educational convention, the Force-Free Summit – Reaching for a Higher Standard.