Hello, May I Have Your Attention? 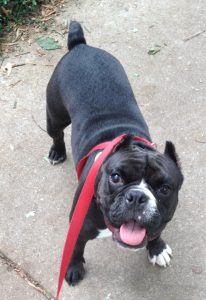 We’ve all been there, sitting in the audience waiting for the guest speaker to come on stage. Or it could be at a wedding or even a classroom. The crowd is talking, laughing in a collective rumble, when suddenly someone notices that the speaker is on stage, waiting patiently for everyone to take notice. Sometimes you can hear the “shushhhhhhhh”, but within a matter of seconds the audience is in rapt attention….the silence is deafening.

Compare that to the unfortunate speaker who tries to talk above the noise: “Excuse me, excuse me…Hello, may I have your attention?”

I’ve found that the same, constant talking to our dogs, has become that similar “white noise” to them. We dilute their names and other important cues, because we don’t know how to get or keep their attention.

For example, we use their name as the cue for everything we want them to do or not do: “Fido (sit)”, “Fido, Fido, Fido (come)”, FIDO! (no). And that’s just using their name. We say things like “Down” when we mean “off”; “Sit, sit, sit” when one “sit” should do, and my favorite, “Leave it” as the dog is being reinforced by the thing he just grabbed off the sidewalk!

Like I said, too much talking and not enough incentive to pay attention to our meaningless words.

There are many ways we can inspire our dogs to tune into us. For one, we can teach them that their name means “look at me” by pairing their name with a treat. For those other times when we are having “conversations” with our dogs, use a nickname. When I want my dog to look at me, I use his name, “Fonzie”, but at other times it’s “Hey Buddy” which is just more of the “white noise”, but at least it’s not diluting his real name. You can teach your dog to come to you by calling, “Come” and run away so he has to catch you. Use a BIG reward when he catches you. Attaching the cue to the action followed by a reinforcer cements in his mind that you are the fun “squeaky toy”. This can be very useful in a highly distracting environment!

But when I want the automatic default “attention” when we’re out walking, I’ve learned to stand very still in silence, waiting for my dog to check in with me. He doesn’t have to be sitting; all I’m waiting for is that moment when he looks at me. This behavior is immediately marked with a click and treat. I use this typically when we are at the gate in my yard, curb-side, traffic lights, and most importantly, around other dogs.

Sure you could just yell your dog’s name (predictable white noise), or jerk his leash, but now you may have unwittingly taught your dog that the sight of a strange dog on the street, predicts some discomfort around his neck, much of which he’s most likely willing to ignore anyway unless you really hurt him. I’d much rather have the sight of a dog, predict that checking in with me is a highly reinforceable behavior.

Suddenly, without words, you are the “speaker” and your dog is the audience member, totally absorbed with you. With this technique, you’ll rarely have to ask, “Hello, may I have your attention?” because your dog will come to expect that when you go “silent” something important is about to be communicated.