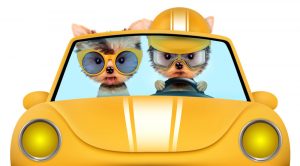 Recently, my nephew and I saw a dog running down a busy main road. She was very lucky as between us we managed to redirect her down an alleyway away from all the traffic and eventually I got her to come near enough to me so that I could take hold of her collar. She was obviously very frightened and stressed. A scared dog may well bite so my approach was very slow, low, friendly and unthreatening in order to gain some trust and not put either of us in a risky situation.

She was wearing a rabies tag with the name of a local vet on the back. I held her collar and soothed her while my nephew ran to our car to fetch a leash and some tasty treats.  As there was no sign of her owner, I walked her to my car which she happily jumped into. We took her to the vet’s office where they scanned her chip to retrieve her name and owner’s phone number.

It turned out that the dog’s owner was searching for her in a supermarket car park. She had opened the car door and her dog had jumped out and run away. The area we found her in was quite a distance from that supermarket! She was very lucky not to have been runover or lost forever.

Thankfully this story had a happy ending and Princesa was reunited with her owner but not all dogs are as lucky as she was.

Here are some car safety tips that will help keep you and your pets safe:

– Make sure your dog is always wearing an identity tag. Research has shown that most pets that are lost and returned home safely are wearing a collar or tag with their owner’s contact details. I give all my DogSmith pet care clients a complimentary identification tag and they get free registration on the DogSmith PAL® database. The identification tag is imprinted with the DogSmith’s number and a unique serial number. 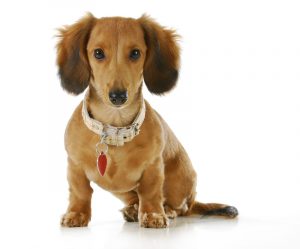 – Always secure your dog when travelling in a car. A crate, barrier system, tailgate guard, harness and doggy seatbelt are good options.  A pet safety harness can prevent runaway dogs. Even a dog who has been taught to wait when the car doors open might flee in the event of an accident.  Your dog could be injured or killed jumping from even a slow moving vehicle or lost for ever simply running out of an open car door.

In some countries restraining pets in vehicles is required by law.  This not only ensures your pet’s safety when opening and closing doors, it also means they are less likely to distract you while you are driving and that they are safely secured in the event an accident were to occur.  An unrestrained pet may become a flying projectile causing serious injury to any humans in the way and often resulting in the death of the pet. A sudden stop, even at low speeds, can seriously hurt your pet and any passengers in the car. “An unrestrained 9lb dog in a 50mph crash will exert roughly 450 lbs of pressure.  A 90lb dog in only a 30mph crash would exert 2700 lbs of pressure.  Imagine the devastation this would cause.” AAA/Kurgo Pet Safety Video. Please note that a car’s airbags can prove deadly to a pet – they should never ride in the front seat of your car.

Stephanie Rose Chamings of Dog Games Ltd, home of the Perfect Fit harness says: “The best investment I made was a made to measure tail gate guard as it means the dog remains safe and secure when the tail gate is opened”.

In the UK: Rule 57 of The Highway Code states drivers need to ensure their dogs or other animals are suitably restrained so that they cannot distract the driver or cause injury to the driver or themselves if the vehicle stops quickly.  Gocompare.com warns that drivers who don’t restrain dogs and cats while on the move are not just breaking the law, they could also be invalidating their car insurance: “The law is clear – you must secure your animal while in a car – therefore if you don’t do this and an animal roaming freely around the vehicle is said to have contributed to causing an accident, then an insurance company could be well within their rights not to pay out on a claim.” www.mirror.co.uk. James Andrew. May 2017. 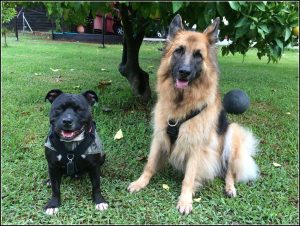 Tessa and Jambo in their Perfect Fit Harnesses

In the USA: Several states have passed legislation requiring animal restraints in moving vehicles but in some of those states laws apply only to animals riding in the exterior of the vehicle, such as the bed of a pickup. In New Jersey, under state law, NJSPCA officers can stop a driver they believe is improperly transporting an animal. Tickets range from $250 to $1,000 per offense, and a driver can face a disorderly person’s offense under animal-cruelty laws. Hawaii explicitly forbids drivers from holding a pet on their lap. In Arizona, Connecticut and Maine, distracted-driving laws can be used to charge drivers with pets on their laps.  USA Today Jim Walsh, Phil Dunn, and Alesha Williams Boyd. 2012

Cathy Virgenock told me that her dog, Cliff, always wears a harness seat belt while in the car.  A State Trooper told her that if someone was in a traffic accident and was unconscious and the dog was not restrained and agitated, they would shoot the dog to evacuate the person from the vehicle quickly.

In Australia: The laws surrounding dog restraint when travelling in or on the back of a car vary from state to state. “In Victoria and South Australia, helfty fines apply if dogs travelling on the back of utes are not restrained. In New South Wales, drivers could face hefty fines and jail sentence if a dog is injured as a result of being unrestrained. In Western Australia it is illegal for a dog to travel on the lap of the driver.” Vetwest Animal Hospitals 2017. 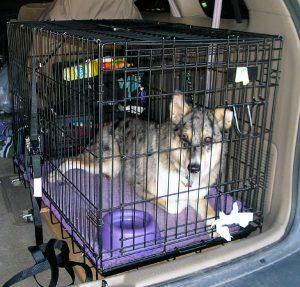 In Spain: The driver of a vehicle is obliged to ensure their own freedom of movement, the necessary field of vision and permanent attention on their driving, thus guaranteeing their own safety and that of other occupants of the vehicle as well as that of other road users. To this effect, drivers should ensure adequate placement of objects and animals being transported so that they do not interfere with the driver.  BOLETÍN OFICIAL DEL ESTADO. Núm. 261. Sec. I. Pág. 103181. Sábado 31 de octubre de 2015.  Artículo 13. Normas generales de conducción. According to Citizens Advice Bureau Spain,  dogs should be secured in EU certified harnesses, attached to seat belt sockets on back seat, or in crates, either behind front seats (small dogs, so small crates) or, in case of bigger dogs, in secured crates in boot of car.

As you can see from the above examples, leglislation for dogs travelling in vehicles varies from country to country and it is wise to know what is required to ensure the safety of your dog and others, as well as avoiding potential fines for not following the laws.  Please check your local legislation but my advice is – whether required by law or not – always restrain your pet when travelling!

– Don’t let your dog travel with his/her head out of the car window.  Not only can this be very distracting, particles of dirt can enter a dog’s eyes, ears and nose, causing injury or infection. In an article written by James Andrew in May of 2017, he says “Drivers that allow dogs to stick their heads out the window could be breaking the law – and invalidating their car insurance”. www.mirror.co.uk. 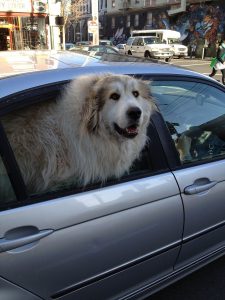 – Please be careful when getting your dog in and out of the car. Use positive reinforcement and practise a ‘wait’ or ‘stay’ while opening and closing your car doors. This is a crucial behavior in a wide variety of situations and one all pet dogs should know. Start by practising the behavior with the car door wide open (no opening and closing of the door initially, as this can act as a trigger to jump out).  I recommend starting to work on duration – just one or two seconds! Gradually increase the duration of the behavior using a high rate of reinforcement – rapid fire ‘click and treat’ for maintenance of a relaxed sit or down.  Once you have built up to a 20-second ‘stay’, you are going to close the car door. You now begin from scratch initially only opening the car door an inch or two and with minimal requirements for duration. You will then gradually increase the duration of the ‘stay’ with the doors wider and wider open. Make sure to also teach a release word such as ‘okay’, ‘release’ or ‘free’ to let your pet know when he/she can safely jump out of the car. Start off in a safe, secure, non-distracting environment before practising in busier areas.

– Sign up for a Pet Dog Ambassador group class and learn how to teach the above behavior and many more practical life skills.  If one isn’t available in your area, get recommendations for local force-free trainers offering pet dog manners classes.

– Join The Pet Professional Guild and take advantage of the local trainer directory and all the educational resources available through the website!

– Learn about canine communication so that you understand ‘dog speak’ and recognise signs of stress. Doggone Safe’s website offers some great resources.

– Above all, stay safe and keep your pets safe.