How Best Not to Catch a Loose Dog

Stolen dogs are constantly in the news at the moment. Losing a dog is not always because someone has taken him, however. He may have simply run off and become lost or have been stolen then dumped. He may have escaped from the yard, something may have spooked him on a walk or he may simply have been on a chase and ignored all your shouts for him to come back. 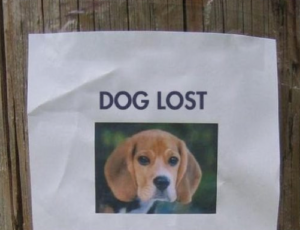 What is the best thing to do if our dog runs off? ‘No Dog About It’ blog emphasises: Don’t chase! It is our instinct to take chase, but that is the worst thing we can do. ‘The truth is it can be pretty hard to go against the instinct to chase a loose dog, but we really must learn to so, because when we chase we risk putting ourselves and the loose pet in danger’.

These are their suggestions:

Stop, drop and lie down. A dog will get curious and will often come back to see what you are doing.

Stop, drop, and curl into a ball

Run in the opposite direction – Some dogs love a good chase.

Sit down with your back or side to the dog and wait – Again, dogs are thrown off by this odd behavior and will become curious and approach.

Here they also consider why, when the dog is lost and sees you, he may not run back to you. To quote: ‘Many lost dogs tend to go into “survival mode”. They are frightened, unsure, hungry, tired (exhausted) and on constant alert. In many cases, they are fending for their lives. The longer they live in this state the less likely they are to recognize their owner on sight – and in fact, they are less likely to stick around and wait to see if the person approaching them is their owner’. They give examples and of how ecstatic the dog is when he finally recognises his people.

Here is something described on the ‘shareworthy’ site that is well worth a try if a dog has been lost out on a walk. To quote:

“On day 12 of searching for my dog in a heavily wooded area, distraught and hopeless, I ran into a couple of hunters. They said they lost the occasional dog on a hunt but always got them back. What they told me has helped many dogs and families be reunited. I’ve given their advice out a few times in the last couple days, so I thought if reddit has any lost dogs out there, this could help:

The dog owner(s) should take an article of clothing that has been worn at least all day, the longer the better, so the lost dog can pick up the scent.

Bring the article of clothing to the location where the dog was last seen and leave it there. Also, if the dog has a crate & familiar toy, you can bring those too (unless location undesirable for crate). You might also want to leave a note requesting item(s) not to be moved.

Leave a bowl of water there too, as the dog probably hasn’t had access to any. Do not bring food as this could attract other animals that the dog might avoid.

Come back the next day, or check intermittently if possible. Hopefully the dog will be waiting there.

I was skeptical and doubted my dog would be able to detect an article of clothing if he didn’t hear me calling his name as loud as possible all day for 12 days. But I returned the next day and sure enough found him sitting there!

I hope this helps someone out there who’s missing a best friend. Good luck 🙂“

For stories of dogs I have worked with to come back promptly when called including dogs that are easily spooked and may run off, please go to www.dogidog.co.uk