How Big Should a Cat’s Litter Box Be? 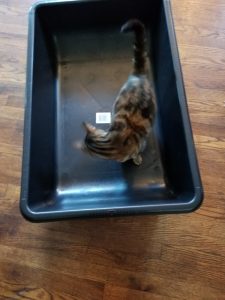 A litter box should be as large as necessary to give cats the room they need to stretch, dig and scratch while using it

I was recently in a home where the resident cat was eliminating outside the litter box on a regular basis. He was a large Maine Coon mix weighing over 20 pounds. When I went to look at the litter boxes, they were well maintained, clean, and in quiet areas of the home.  There were more than enough boxes for both of the cats too. The first thing I actually noticed was the size of the litter boxes. They were average size commercial litter boxes. When I asked if the owners  had tried larger boxes, they immediately asked how big the litter box should be.

The average size commercial box is approximately 16 x 10 inches. The jumbo boxes average approximately 22 x 18 inches.The rule of thumb is that the litter box should be 1.5 times the length of your cat. Adi, my little domestic short hair, is about 16 inches long and about 8 pounds. Using this formula her litter box should be at least 24 inches long. This is longer than the average jumbo box.

Why is litter box size important? It is important because cats do not just squat to eliminate in their box. Many stretch out when squatting. After they are done cats will then spend time stretching and digging while covering their elimination spot.

I learned quickly to ditch the commercial litter boxes and replaced them with low sided storage totes designed to fit under the bed. Not only could I get them in a variety of larger sizes but they also tended to be cheaper than the jumbo boxes. The only problem I had was that many boxes have a ridge running around the bottom edge of the tote which makes scooping the bottom a little tricky. The other problem is that some of the nicer ones came with wheels that needed to be removed.

The search continued for a better box. Then a friend of mine had just adopted a retired show cat. A large male Maine Coon to be exact. She couldn’t wait to share with me the litter box idea she was given by the breeder. Cement mixing tubs! I headed over to the local home improvement store and found two sizes. The medium tub measured 27 x 20 inches and the large tub measured 36 x 24 inches. They also have flat bottoms with rounded edges which makes scooping easy. They are also economical at under $15 each.

I brought a large one home and set it up near my under the bed totes and it immediately became my trio’s favorite. I was cleaning it far more than the other now neglected boxes. They were soon switched out for more cement tubs. How big should a litter box be? As large as necessary to give your cats the room they need to stretch, dig and scratch while using their box.

I shared my litter box finding with the family and they said they would head to the store later that day. Within the week I received word that they had replaced the commercial boxes with several large cement mixing tubs. The result? Their cat had stopped eliminating outside the box.

Jennifer Mauger is the owner of L’Chaim Feline, where she offers private in home behavior modification throughout Northeastern Ohio educating cats and their people. Jennifer is also a professional Member of the Pet Professional Guild, a Certified Professional Dog Trainer as well as a Graduate and Certified Training Partner of the Karen Pryor Acedemy of Animal Training and Behavior where she trained two species in order to graduate. One of her training partners was her cat, Adi. She has also worked on several commercials featuring her late Bengal, Ari.