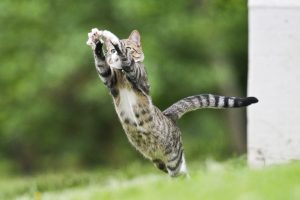 Some cats may prefer prey that flies through the air and owners who are aware of this can select toys accordingly. © Can Stock Photo Inc./funix

Playing with your cat is not just fun and games. Play relieves boredom and stress, and can even help control behavior problems. In fact, a wide variety of feline behavior problems, from aggression to destructiveness to self-mutilation to inappropriate elimination to obsessive chewing, can be helped or managed by adding regular interactive play to a cat’s day.

All Play Is Hunting
The most important thing to remember is that for cats, play is always a form of hunting. Real prey is clever enough to make the hunt interesting. Mice, spiders, and other creatures are unpredictable. They run at different speeds. They change their direction. They scurry under the couch or behind the curtains. They play dead and then suddenly jump up and make a break for it.

There is no substitute for interactive play, because only interactive play can simulate the hunt. All those wind-up, hang-on-the-door, and automatic motion-detector toys don’t act like prey. Most follow a simple pattern when they move. But cats are extremely intelligent hunters and can quickly figure out these patterns. And then the toys are just no fun.
Even the automatic toys that are a little bit unpredictable are not at all like prey, because they’re so big and hard (have you ever seen a lion pounce on a plastic garbage can?) and so loud (mice do not roar). Cats like things that are small and furry and make just the slightest rustle and squeak. That’s because cats locate their prey either by sound, visually, or both. Small movements and small sounds best simulate prey. 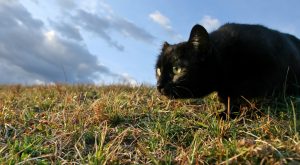 Watching and planning are important aspects of hunting, and owners can incorporate these stages into play sessions for a more realistic, satisfying experience for their cat. © Can Stock Photo Inc./FotoFoto

Cats stalk their prey before pouncing. They don’t have the stamina to do a lot of chasing, so they have to make every pounce count. They stealthily move closer while they plan the attack. Eventually, there is a pounce, a catch and a kill bite. That means watching and planning are part of the hunt, so a cat who is not moving but is locked on visually to a toy is still engaged in the game. Watching and planning are aspects of play for a cat. The cat may even run away from the toy to stalk from across the room or crouch behind a piece of furniture for a better pounce.

This also explains why cats love to hunt from a hiding place and burst out onto their prey. Throwing an old towel over a low coffee table or draping a coat on the back of a dining room chair will give your cat a perfect place from which to hunt. Often, making a “tent” is enough to get a reluctant hunter going.

If the cat is sufficiently stealthy, the prey never notices the cat and simply goes about its business. When the prey does eventually become aware of the cat, it usually moves away rather than toward the cat. It may try to hide under or behind something, but will keep making small movements and small sounds. Understanding this gives you clues about how to make a toy enticing to your cat. Make the toy move away, cleverly changing direction, dashing for cover and popping out again.

If the cat doesn’t show interest, you are not likely to get a response by touching the cat with the toy. That is not what prey would do. You will get a much better response by slowly moving the toy under a door and out of reach. Or you can move a toy around behind you and out of sight, and your cat will respond by following to see where it went. 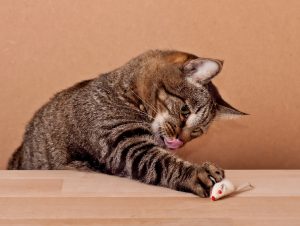 Cats will often demonstrate a preference for certain type of toy depending on their style of play. © Can Stock Photo Inc./nataly0288

While some cats like to leap into the air, grabbing for a toy, many do not. From the cat’s point of view, leaping into the air is a last-ditch attempt at a catch. If your cat is jumping for the toy, she is not hunting it. See what your cats prefer but for many (especially older cats), prey should remain on the floor.

When caught, prey struggles a bit, then stops. If it escapes, the cat may chase it for a short while but quickly will give up. That is why you must make sure your cat catches the prey many times during a play session. In a 10-minute play session, the cat should catch the prey at least 10 times. A toy that can be caught and chewed or even torn limb from limb is the most satisfying. The toys your cat destroys are the best toys. Keep buying or making more of those. Let your cat catch the toy and then make it struggle a bit. That makes the cat feel like a very successful hunter.

­­­­­­Toy Preferences
Individual cats have individual prey preferences. For example, some cats hunt at night because their preferred prey is nocturnal. For these cats the sound of the prey is what causes them to switch from stalking mode to killing mode, and toys and games that make scratchy, rustling sounds are particularly exciting. Cats who hunt animals that are active under conditions where there is more light will be more stimulated by the prey’s movement.

Cats may also prefer prey that flies through the air, that wiggles on the ground, that hides and disappears, or that moves in plain sight; prey that is light feathery, small and furry, long and snaky, easy to carry in their mouth, easy to bat with their paws, fun to chew, or several of the above.

These prey preferences dictate their toy preferences. Some cats like big things and some like small things. Some like hard things they can bat with their paws. Some like soft things they can pick up and walk around with in their mouth. Often, knowing which toy is a favorite will tell you how the cat likes to play. Some cats will prefer one play style over another, just as some cats like fast-moving prey and others prefer it to move more slowly.

To understand your cat’s play style, start by thinking about the four feline food groups: bugs, mice, snakes, and birds. Bugs fly in circles close to the ground, so a toy that goes in spirals and just touches the ground at each go-round is a bug. They fly in erratic patterns and land on things a little bit off the ground. Mice alternate walking and running, so the toy will move fast, then stop for a bit, then inch along, then run again. Mice also like to hide behind and under things. Going under a door or hiding behind a couch leg is what a mouse would do. Snakes crawl slowly under blankets and towels. They often stay still or move only slightly. Birds fly around and land on chairs and tables then stand still for long periods before taking flight to land somewhere else.

This video African Wildcat – Healthy Predatory Hunting Behavior in the Wild will give you clues about how your cat may like to play. Note: the African Wildcat is the ancestor of our domestic cats.

You Are Not Prey
You want to encourage your cat to play wholeheartedly and to really think of the play session as a hunt. That means the cat has to be able to bite down—hard, so use toys that are away from your body. There are plenty of cat toys that come on a string, stick or wire, or try something small that you can toss. This discourages the cat from thinking of human body parts as toys. Cats who are in play/prey drive are totally in the moment and are completely unable to inhibit their bite, so keep your body parts to yourself. Also, you, the large person, are too big to be prey and can even be intimidating. Something remote and far from your body is more like what the cat would hunt.

Two safety reminders: Always make sure the toys you choose have no easily removable parts that might be swallowed by your cat or otherwise cause harm. And anything with a string or wire should be put away when you are not playing with your cat because cats have been known to swallow string.

Winding It Down
Most cats can only play for 10 to 15 minutes at a time (although young, healthy cats can go for longer) so make the play sessions short and active. Don’t just walk away from a play session, leaving the cat wound up, however, as that will just lead to frustration. Remember, play is like hunting. Think about a wounded prey animal: It will start to move more slowly and erratically. It may be still for long periods of time and then move just a little. It will be easier and easier to catch. Let the cat catch the toy more and more often. Make sure the prey is thoroughly “killed.” Eventually, let the cat catch the prey and it will move no more. Drop the toy on the floor. The cat may bop it a few more times, along with a few more bites and shakes, to be sure it is really “dead.” Don’t put the toy away until the cat has walked away; if you pick it up while the cat is still interested, the “prey” has been resurrected.

Finally, end every play/hunting session with a small treat. This cues the end of play, and also ends it in a very natural way: The cat has stalked the prey, pounced on it, bit it, killed it, and finally, will eat it. Very satisfying!