How Force-Free Training Helped Save My Dog’s Life! 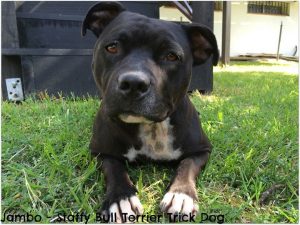 Yesterday I shared a post on Facebook about Pamela Johnson’s “Rattlesnake Avoidance Training Using Force-Free Methods,” a Pet Professional Guild webinar. (You can register and watch the webinar here).

Last night we had a thunderstorm and my Staffy bull terrier, Jambo, was frightened so I stayed up with him. The storm finally passed and at 2am I took him and Tessa, our German shepherd, outside for a bathroom break. There was a toad at the bottom of the steps but unfortunately, I didn’t see it until Jambo made contact. As a result of what happened, I am going to share our personal experience and the information that my vet has subsequently shared with me.

There are seven types of toads that can be found in Andalucia, Spain where we live. All of them are poisonous, but the ‘true toads’ of the Bufo family are generally considered to be the most toxic. Toads range in size from 2 – 25 cm (1 – 10 inches). The poison is located in the raised area behind the eyes, known as the parotid gland. Poison is also present in the warts found on the toad’s skin. The toad secretes poison when it feels threatened. Toads are nocturnal creatures who belong to the amphibian group of animals. They live on land but breed in water. The toad will often burrow itself underground and remain there for long periods of time, particularly during droughts or very cold weather. They are more likely to be seen at night and in wet weather conditions. It was both dark and wet last night.

What Are the Symptoms of Toad Poisoning?
An affected dog may show some or all of the following symptoms after mouthing or biting a toad:

What To Do If you Suspect Toad Poisoning?

We kept Jambo under observation for an hour. She listened to his heart several times. It was still normal. I brought him home and observed him. He was still very agitated. A couple of hours later he began to vomit. He has now had two more injections, including one for the vomiting and is finally sleeping peacefully).

We think the toad was perhaps a juvenile as it was definitely smaller than the full size ones we see. It was about 5 or 6 inches high. Its size could well have meant it secreted less venom. We will never know whether that was the case or whether it was my quick action in rinsing Jambo’s mouth but Jambo is now recovering. The anti histamine I gave him may also have helped. Jambo’s force-free training and his response to my “stop” cue, even when panicking, also meant that we saved vital minutes. My vet has treated two dogs in the last three weeks from contact with toad venom. They were not as lucky as Jambo.

Are Cats Or People At Risk From Toad Poisoning?
It is extremely rare for cats to succumb to toad poising but not impossible. Cats seem to be more aware of the threat posed by these amphibians and tend to stay away. However, if you are concerned that your cat has been in contact with a toad the same procedure as for dogs would apply.

In humans, toad toxin exposure is not considered hazardous but it can cause severe irritation to the eyes, nose and throat. The use of rubber gloves is recommended when handling a toad.