How to Talk Dog 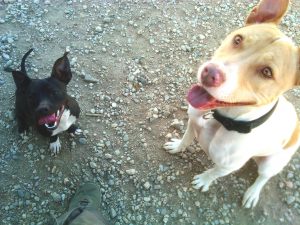 Dogs and humans have been friends for thousands of years. In fact based on some of the latest studies, it is estimated that dogs evolved from wolves almost 40,000 years ago. But what is most incredible is that science, until the last decade, hadn’t been interested in studying dogs; after all why bother with a common domesticated animal when there are so many exotic species to study? But they couldn’t have been more wrong, as it is domestication that sets these amazing creatures apart from other animals and as such has made dogs so in tuned to humans, that if they had our language, they would finish our sentences for us!

Brian Hare, Professor at Duke University, has a program that studies canine cognition. There, his group of scientist set up specific “puzzles” for dogs to solve and the data is collected and compared to other dogs’ test results. The program at Duke is called Dognition.  As Dr. Hare explained in his recent book, The Genius of Dogs, dogs have spent a lot of time “studying” human body-language, and in fact are the only animal that understands our gestures, such as when we point. (Even our closest relatives, chimpanzees, do not understand our meaning when we point.) So what this means to the average dog owner is that while we speak in our native language to our dogs, (and think that they understand us), our dogs are watching our gestures, posture and of course the tone in our voices. This is a blessing and a curse for dogs. For example, the human will “command” the dog to “sit, sit, sit” (each time getting louder and the posture encroaching on the dog’s space). The dog, responding to the threatening posture and tone, eventually sits, giving the human the faulty sense that the dog knows “English”. What’s problematic of course is when the human thinks the dog “knows”, but is spiteful, willful or (that old-fashioned word to describe ALL inappropriate behavior) “dominant”!  This unfortunate ignorance has caused many dogs to be abused or dumped at a shelter.

Of course dogs can understand some words and typically can learn a few hundred.  There is a famous study on a Border Collie named Chaser, whose owner taught this dog over one thousand words and this dog could not only distinguish one toy from another, he could remarkably make inferences when his owner asked the dog to retrieve a toy, when the dog had not learned its name!

Generally, dogs learn by making associations to things and they learn by consequences. So for example when the owner picks up the leash and asks, “Want to go for a walk?” The dog has made a positive association of the happy tone in his person’s voice and the leash, which predicts a walk. After a while, even without picking up the leash, the human could utter the same sentence and the dog would understand the association; although, he could just as well say “Yabba-Dabba Do”  to elicit the excited response to the walk!

To prove that point, I’ll often ask my students to cue their dogs to “sit” and when the dogs sit, (usually a response to the person leaning into the dog’s space or the tone). I’ll then ask them to tell the dog “pink”. Most dogs will sit, for the same reason they did for the word “sit”; they are responding to the body-language.

When we teach a deaf dog, we can’t use words, but it doesn’t hamper their learning, as they learn like other dogs, by following gestures and movements and of course they’re given a consequence of something they like (food, toys, play etc.).

So the next time you want to talk to your dog, use gestures; he’ll get your point!