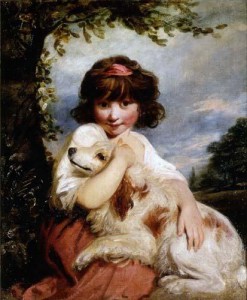 A Young Girl and Her Dog by Joshua Reynolds [Public domain], via Wikimedia Commons

Imagine if somebody, particularly someone you didn’t know, were to approach you directly, grab you and, despite your resistance, squeeze and rub him/herself against you, what would you do? Struggle to escape? Shout at them? Call for help? Slap them? I’m sure you would be very fearful of what might happen next.

According to human etiquette, not only would it be a totally unacceptable invasion of our personal space and extremely bad manners, but pretty threatening also. In the workplace it would be justification for a complaint of harassment.

‘Hugging’ isn’t part of the dog’s repertoire – humping being the nearest thing.  How would a dog therefore instinctively feel when grabbed and squeezed – particularly a dog that has not been desensitized to the point where he understands this weird ‘hugging’ behavior is a human idiosyncrasy, an odd behavior associated with a person he knows well, that he’s relaxed with and trusts.

The majority of dogs never get to this point. A great number whose humans are convinced their dogs love being cuddled, simply patiently tolerate it.

To humans, a hug means love and affection, it makes us feel good inside. Humans are always hugging each other. Young children hug dogs impulsively without thinking. When we hug our dogs we are sending out our affection and sharing our love. However, what we are giving out isn’t what the dog is receiving. To a dog, a hug is very bad canine etiquette, pushy behavior associated with establishing social status, an invasion of space, threatening. 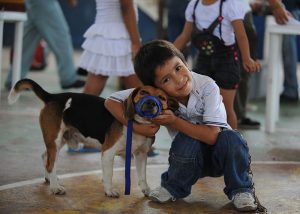 ‘Cuddlers’ showing their love for a dog may actually in a strange way be meting out punishment. I wonder how many people have thought of that?

In an interview in Mother Nature Network with Jaymi Heimbuch, Patricia McConnell talks about reading the dog. “It’s good to be sure how your dog feels when you hug him or her, and how he feels when strangers go in for a hug, especially since hugs mean putting your face next to a sharp set of teeth. If a dog barely tolerates hugs, then the wrong hug at the wrong time could mean the dog snaps at the hugger. No one wants that. Thankfully, dogs make their thoughts abundantly clear through body language. As long as you know what to look for, you will know what your dog thinks of a love-squeeze.

One of the best things that I’ve found to help people decide whether their dog likes it or not, is to hug your dog and have someone take a picture,” continues McConnell, “When we hug our dogs, we don’t see their face. [A client] will say, ‘My dog loves it!’ Then I’ll take a picture and show them, and they’ll say, ‘Oooh’…..The response a dog has when someone puts their arm over them is varied. “They’ll go stiff, they’ll close their mouth, maybe they’ll do a little lip licking. They’re anxious, they’re concerned, perhaps wondering, ‘Did I do something wrong? What should I do now? Should I just sit still and not do anything?'”

rr of Doggone Safe simply says that dogs don’t like hugs. “This is one of Doggone Safe’s major messages and probably the one that gives us the most trouble. Many people simply don’t believe this and are determined to argue about it”. My ‘story’ below is a good example of people thinking if a dog doesn’t want to be cuddled, there is something wrong with the dog.

This puppy was ultimately given no choice other than to bite.

I went to see a puppy recently that, despite all my advice to the parents and the young children about what their puppy felt about being hugged, my warnings were not properly heeded. He has now bitten the little boy – twice; the second time the child ended up at A & E. 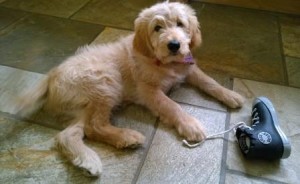 The family have a wonderful Goldendoodle puppy called Dave who was 11 weeks old when I first visited and is now 16 weeks old. They have a very large open plan house, a big garden and two young children (four and seven) who are desperate to interact with Dave. I sat in the kitchen watching what looked like a lovely scene through the window. In a world of their own, the two children and the puppy were climbing some rocks in the garden beside a covered pond.

This is perfect until the children or puppy get excited and start to run about. Then the puppy becomes ‘bad’ as he chases them and grabs their clothes.

When someone hasn’t had a dog before, let alone a puppy, it can be hard to see things from the dog’s perspective. The parents have a dream based on their own childhood stories and films of dogs bounding free and sharing their adventures. ‘Won’t it be lovely for the children to have a dog to play with.’

The reality is that they now have three young children! Thankfully, the newest member of the family will grow up a lot more quickly, but meanwhile he needs the same sort of attention translated into doggy terms. Instead of anger and punishment he needs encouragement, teaching good manners, rewards and reinforcement. Just as very little children aren’t given unsupervised freedom, nor should the puppy.

I stressed how supervision is particularly important when he is with the children (trying tactfully to say that her children needed the supervision more than the puppy!). Thinking it would be fun, they had actively been encouraging chasing games which had resulted in Dave becoming over-excited, grabbing clothes and nipping. Running along with children is part of the dream – but chasing them is not. So – puppy was punished.

Most worrying of all is the compulsion of these two lovely affectionate little children to grab Dave around the neck to squeeze, cuddle and kiss him. This is a universal characteristic of most children and one of the major causes of dog bites. It seldom occurs to a new dog owner that the dog may not want to be cuddled, crowded and especially not carried around by a child, or fussed while he’s eating. They can be so resistant to accepting this, particularly if the dog is just a puppy. Any education about how to behave with dogs (including puppies) has simply passed this family by.

It is so important that little children are trained to respect a puppy’s personal space. Dave (really the most amenable and gentle puppy) is now growling at these kids.

Together we did various ‘no cuddling’ games. I suggested that with Mom’s help both children made little badges that she could sew onto Dave’s harness or collar to remind themselves (she didn’t take it sufficiently seriously). We also pretended that Dave lives in a bubble that the kids must not burst. Like many other people, the parents felt, “What’s the point of having a puppy if the kids can’t show him their love and run around with him? It’s like we are scolding them all the time.”

To the little girl Dave is just a large animated teddy bear and she already has a small cut on her face – but she is undeterred. When an excited Dave ‘goes for’ the little boy, he gets scared and angry and smacks him. This is a recipe for disaster.

Just as Dave needs reinforcing for the good things he does, so do the children. I rewarded the little girl with small sweets for touching him gently on the chest and for hanging back when she wanted to cuddle him, but I can’t live there and it needs to be constant. Properly supervised, the children could have great fun with Dave by playing games that teach him desirable things. Instead of chase games, the family can call him from room to room and in from the garden, rewarding him for coming – a brilliant recall game. They can play the sort of tug games that teach him to release and to be careful what he does with his teeth. They can teach him to walk nicely beside them off lead. They can hide things for him to find.

Over and over I emphasized the importance of keeping children and puppy separate unless the lady gives them all her full attention. I even lent them a puppy pen. Rather than let things get out of hand and allow Dave to become unruly and rough, I showed her how to pre-empt trouble. The moment Dave begins to get over-excited he should be called to her, rewarded liberally, and put in the pen with something to do. The children needed to be taught that they simply must stay away from the pen – it’s Dave’s den.

Horribly predictably, a week later the little boy came into the kitchen while Dave was eating his breakfast, he put his arms out towards the puppy to cuddle him, and Dave bit him on the arm. It was a deep bite, down to the bone. He was lucky. It could well have been his face or his eye.

This is a drama that is being played out in many homes all over the world. In my opinion this particular puppy is in the wrong home and he should go back to the breeder before he becomes even more damaged, and before a child gets seriously hurt.

I fear the parents still see it as the fault of the puppy – not the behavior of his humans, and that he is an ‘aggressive dog’.

Although children speak the same language as we do, they are probably a lot harder to train!

There are many more stories of dogs I have visited on my website: www.dogidog.co.uk