I Only Have Eyes For You! 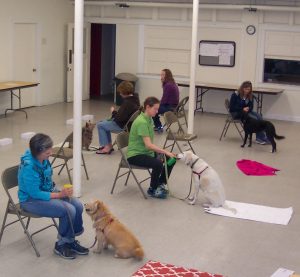 One of my specialities is doing in-home training so that the human gets trained and then I highly recommend taking Fido to a group class to practice the new skills in a more distracting environment. And for puppies, this is very important as it will help with the socialization process of playing with other puppies off leash, meeting new humans and of course teaching the human how to work with Pup around more distractions.

But working in more distracting environments is NOT the same as when you are working at home and I often hear my clients say that Fido knows what I want, but when we are outside he ignores me. This often leads humans to believe that their dog is being “stubborn” or, this popular expression, “dominant”. Problems arise when we move from a familiar environment to the unfamiliar, because from the dog’s perspective, he doesn’t understand that the same rules apply in the new setting. Furthermore, let’s face it, there are new and exciting things calling to him.

Over the years, I’ve said what thousands of other trainers before me have said, and that this issue is about the dog, but I’ve come to look at this from a different angle, and to take liberties with the title of Dr. Trish McConnell’s highly-acclaimed book, this issue is also about who’s at “The other End of the Leash”! It isn’t just that dogs are “excited” when they go to a new environment, it is also that, from my experience, the human seems to be just as distracted and can display some or all of these behaviors such as being “paralyzed” with embarrassment because of how the dog is acting, want to show everyone they’re in control by yelling at the dog, and or they want to be sociable, so they spend time engaging other humans while ignoring their dog. It’s as though they totally forgot all the skills they were using in the home environment and just like the dog, they become unglued, so to speak!

To help my clients transition from the familiar routine of in-home training to an unfamiliar group training setting, I prepare them by teaching a strategy so that no matter where they are, they’ll always have a way of assessing the situation and creating a way to win.

The mantra I teach is “I only have eyes for you!” Yes, I know that sounds silly, but if humans would spend their time only on their dog, while ignoring other things in the environment, the dog will do the same. And in order to do this, you must set up conditions whereby ALL reinforcers come from you and NOT from the environment, NO exceptions! This, I believe is where things go awry for humans because in their need to get from place to place quickly, especially when going to and from the class, they allow the dog to get reinforced by the environment thereby doing many undesirable behaviors such as bolting from the car, running to the building, barking and lunging at the new dogs in class and so on, but if the human sets up reasonable expectations and teaches their dog from day one, things can go a lot better.

Here are some examples that I teach my clients:

Get the dog in the training game before you open the car door: This means rather than allowing him to bold out of the car and drag you through the parking lot, it’s best to arrive early to class and spend time working on “Wait” in the car before he comes out.

Lower your criteria: Getting Pup to walk perfectly from the car to the building the first day of class may be too much to ask, however as soon as you’ve released Pup from the car, you can halt and wait for a sit and reinforce him with a potty break. As soon as he’s relieved himself, do some loose leash heeling around the parking lot for a few minutes making sure he is being reinforced frequently for paying attention, while using a serpentine movement toward the building, as opposed to walking in a straight line where he’s likely to strain on his leash to get to the class. When standing near the entrance, cue or wait for the sit, before giving the dog access to going indoors.

Keep Pup in the game once inside the building: Reinforce Pup for his ATTENTION to you. So “eye contact” gets a reinforcer; responding to his name gets a reinforcer. We want him being reinforced early on and frequently so it gets him in the game BEFORE he has time to explore the room.

Create your own small environment to work in: This means instead of putting Pup in the middle of chaos, to the best of your ability given the size of the room, increase the distance between yourselves and the rest of the humans and hounds.

Keep moving: Make yourself interesting by taking a few steps and reinforce Pup for following you; keep moving, change directions frequently and throw in a few halts and wait for Pup to sit before reinforcing him. Offer more reinforcers for Pup focusing on you in a sit/stay.

While in the group, it’s easy for humans to get distracted while the instructor is talking, but it is critical to keep your eyes on your dog, making sure to reinforce him for his good behavior, while keeping your ears open for your instructor. This way he’ll know you’re still playing the training game. The easiest way to loose his attention, is to ignore him, so make sure you are focused on him so that he’ll stay focused on you.

Yes, this is challenging, but once Pup learns you’re more interesting than the rest of the distractions, he will acclimate much faster to new situations, because you are consistent and have made each new situation a fun place where there’s an opportunity to win, when you only have eyes for each other!