If I Knew Then What I Know Now

If the Hound of the Baskervilles ever needed a stand-in, my dog Cuchulain would have pushed to the head of the line. A Scottish deerhound/Irish Wolfhound mix, he was a 130-pound guided missile of shaggy black fur, crazy long legs and very big teeth. The day he started rushing at strangers and snapping is the day I began to seriously rethink my approach to dog training.

“No really, he’s not aggressive,” I reassured them shrilly. I was a little less convincing than the dog looking them level in the eyes with a growl you could feel in the soles of your shoes. So yes, I was completely delusional. But…how could this be? Owning a giant devil dog was never the plan. He came from an accidental litter of mixed hounds. I took him as a favor to a friend. I had no idea he’d become the size of a buffalo. And he grew on me. Cuchulain shared my couch and my bed. We were friends. We went everywhere together. He was urbane and witty. He played dog jokes and was a pretty jolly guy for a massive carnivore. Surely just another crisp snap of that choke chain and everything would work out fine… 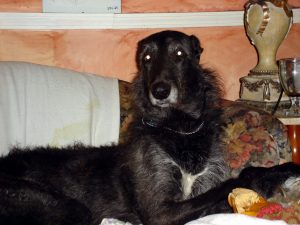 This was the 1990’s and the state of dog training was in flux. I was just hearing faint talk about something called clicker training and assumed it was about entertaining the dog with perky sounds between breaks in actual training. My shelf was full of books that warned that if I didn’t stay strong and be the alpha dog, it was only a matter of time time before Cuchulain’s innate need to seize control of the household would kick in and we’d have to turn the keys over to him.

Like many dog owners, I’ve evolved. My next dog, an Irish wolfhound named Finn, flourished with positive training. I say this not just because he’s a gracious companion I can take anywhere. Or because he patiently greets the children and grownups who flock to meet him on every outing. It’s because from the time he was a 10-week-old puppy, force-free training has been the basis of an ongoing conversation between my giant friend and I. Finn caught on fast that when he repeated a particular action, two amazing things happened. There’d be a crisp “click” from the toy clicker in my hand. And, there’d be treats, right then and there. And when he showed he knew what to do to get a treat, I attached a vocal cue to tell him when to do it. And those crazy treats just kept on coming. Those sounds from the human weren’t just some kind of sad attempt at proper barking. They directly affected Finn. This intrigued him. Finn started listening and watching me. Intently. And the treats parade rolled on, followed closely by an eager, happy hound.

It was positive training, clicker training, and here’s why I’m so sold on it: Living in the human world is stressful and confusing enough to a dog. And then there’s those rules that so often make no sense whatsoever to a canine. Obedience is rarely a question. You can force a dog obey your rules with prong collars and shock devices or just by jerking hard on that choke chain around his throat. But it’s a fearful obedience. And a fearful dog, a defensive dog, a dog cornered in a crazy world beyond his control often becomes a biting dog. Most of us get dogs to be our companions. Mr. Hyde isn’t much of a companion.

Or… your dog can learn your crazy rules and keep his dignity without fear. When there’s mutual trust, affection and respect, such a dog blossoms. Finn has. So have my two other rescues. They can express themselves without fear of retribution. They can make mistakes without being jolted with electricity or strangled. You begin to see who your dog really is when they’re not too scared or suspicious of the erratic human to let their guard down and just be themselves. Positive training creates relationships, not lifers coping by desperate means in the Big House. A bond is established. It’s the natural order. Your dog knows you’re his mentor and protector, his reliably secure base from which to explore the world and come home again. A clicker isn’t simply a training tool. It’s a skeleton key to unlock your dog’s mind and full potential.

I failed Cuchulain. He led a diminished life, starting the day he gave his first outraged yelp in obedience class the first time I snapped that choke chain. He became progressively antisocial. If the human closest to him could be so casually cruel, he wanted nothing to do with the rest of our kind. When he’d had enough and became unsafe around people, our walks became furtive and limited to early mornings. We never traveled with Cuchulain. There were no force-free trainers near us, no one to help me correct the course I put him on with training that in its day was considered perfectly reasonable. Despite my growing skepticism, the dominance theory told me I must step in and show him who’s boss. I did one day when he was standing on his back legs, plucking a banana off the top of the refrigerator. I tugged his choke chain. And he sank his fangs up to his gums in my palm. And then ate the banana while I bandaged my wound. If there was a boss in the room, clearly it wasn’t me. Also, he’d trained me not to jerk on that choke chain ever again.

In this tale of two dogs, Finn is the clear winner. He’s affectionate and expressive. He’s taught me as much as I have him about communicating with another species. And always I’ve wondered who Cuchulain might have been if I hadn’t listened to so-called experts who insisted that dogs only understand brute force and that we, their owners, are just the ones to use it.

Bob McMillan is a newspaper editor and columnist who lives in the foothills of Middle Tennessee with his Irish wolfhounds, rescues and cats.