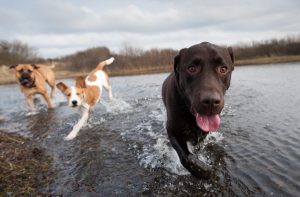 A dog’s ethogram would include social context, including feeding, greeting, grooming, and play; the placement of each body part, accompanying vocalizations, the configuration of each body part and the movement of these body parts © Can Stock Photo / Enjoylife

With a background in behavior analysis and animal behavior, I am easily captured by behavior in the wild. I was driving to work a couple of weeks ago and stopped to watch a family of geese walk across the street. One adult was in the front, one adult was at the back, and they were separated by four juveniles. The adult at the back was moving his head back and forth with his beak open, I’m assuming making some type of noise.

Those 30 seconds reiterated to me how important observation skills are in the field of animal behavior, whatever your specialty may be: veterinary medicine, zoology, marine biology, training, behavior consulting, breeding, sheltering, large animals, small animals, companion animals, wild animals, exotic animals, insects and so on. Whatever you may be interested in, you must have sharp and precise observation skills, as well as a questioning mind. Why were the geese lined up in that particular order? Why was the last adult moving his/her head like that? What type of vocalizations was he/she making, and why? If they were in line near a pond, would that situation be likely to occur, or was this happening only to cross the street? I’m sure that in whatever field of animal care you’re in, you can relate to these types of questions.

So, I started thinking a bit more about observation skills and how they relate to animal behavior. One thing I learned during my externship at Wolf Park in Battleground, Indiana in 2004, was the importance of having an ethogram when documenting and observing behavior. An ethogram is a collection of operational definitions, along with illustrations, of what behaviors look like. This can provide a common language among colleagues who are in similar roles or professions.

Ha and Campion (2019) explain it as follows: “An ethogram catalogs an animal’s behavior, comprising the placement, configuration, and movement of body parts and behavioral contexts, including locomotion and travel. The behaviors contained within an ethogram are typically defined as objective and mutually exclusive, thus making them individually recognizable to any observer.

Ethograms can include a wide range of information, such as the social context, gestures, facial expressions, vocalizations, initiators, and recipients. For example, a dog’s ethogram would include social context, such as feeding, greeting, grooming, or play; the placement of each body part, including the head, tail, torso, and legs; accompanying vocalizations; the configuration of each body part; and the movement of these body parts…Each observed body position would have a specific name…The descriptions of these behaviors would be specific enough to allow independent observers to reliably agree with one another on what they were seeing. From nose to posterior, a detailed ethogram would enable observers to reliably document and decipher the behaviors of a species.”

At Wolf Park, during the winter mating season, wolves are especially active. Staff and volunteers keep watch 24/7 regarding which wolves interact with others, how they interact, and when they interact. A plethora of behaviors is seen, and in order to communicate effectively with other staff and volunteers, as explained above, a common language has to be used. It is easier to document behaviors when staff understand what “airplane ears” look like (e.g., ears held out to the side, inner surfaces down, like the wings of an airplane), what an “agonistic pucker” looks like (e.g., a vertical retraction of the lips), or what a “rally” looks like (e.g., three or more wolves pressing together with tails wagging while greeting).

Ironically, a book I purchased seven years later while visiting Wolf Park with my husband, continues to be a resource for my dog behavior career. Canine Behavior: A Photo Illustrated Handbook by Barbara Handelman (2008) is an extremely thorough ethogram for dogs. The book’s foreword is written by Dr. Lore Haug, a board-certified veterinary behaviorist, and reviews by three of our industry’s highly respected colleagues, Ken Ramirez, Suzanne Clothier (also a regular BARKS contributor), and Dr. Sheila Segurson, are quoted, adding to the merit of how valuable the work is. Canine Behavior gives photo examples of behaviors, alongside operational definitions and commentary about what each photo depicts.

The week before my husband and I adopted our German Shepherd/rottweiler puppy Luigi, we sat down and discussed what the boundaries of the household were, as well as the behaviors and foundation skills that we thought were important to teach our new puppy right away. Before we could teach puppy anything, we had to define what our cues meant; “sit,” “crate,” and “go pee” were so much easier to teach Luigi since we were aware of each cue’s definition and what the behavior physically looked like when it occurred. 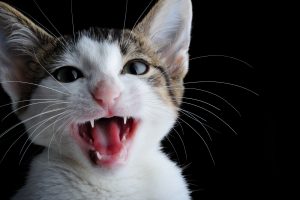 Fast forward to now, there are some behaviors that 11½-year-old Luigi will do that my 12½-year-old Beagle never did. There are some behaviors that my 8½-year-old domestic medium haired cat will do that, obviously, her brother can’t do because he’s a different species. Luigi can “silent bark” and “moo,” wades in the water, and plays in the snow. Spud could “oink” and “beagle bay,” catch rabbits, moles, and possums, and spend hours in the sunshine. Katy Purry has at least 25 different vocalizations; the one my husband and I are most familiar with is her “hangry meow” where the corners of her mouth extend to either side of her head. She climbs on a cat tree and uses a litter box.

These are all observations of behavior. It’s important that we humans who share our homes with our furry companions are familiar with both typical and atypical behaviors for each of our animals, so we can provide them with the best welfare and quality of life possible. By being aware in this way, we will be better placed to determine when the animal is in pain or something else is wrong.

When I wear my puppy training hat and have private clients, one of the very first things I discuss is what the dynamics of the family look like, as well as perceptions and expectations. Who will be the primary caregiver? What is the family’s current daily routine? How will that change when puppy arrives? Who will interact with the puppy the most? After I discuss their perceptions and expectations, I explain and emphasize the importance of the human members of the family to be able to recognize dog body language. What do play behaviors look like? What does stress or anxiety look like?

Canine Behavior is a wonderful tool to use to show clients what different behaviors are. Alongside that, I use the Puppy Start Right program (developed by Dr. Kenneth Martin and his wife Debbie Martin) to discuss how force-free training will work, and I provide the book to every client. I advocate for environmental management, positive experiences during the critical periods of socialization, and marker training, with a clicker being the most common marker that I use. Ethograms and operational definitions of behavior are extremely useful when teaching new skills to puppies.

Being involved in professional organizations such as the Animal Behavior Management Alliance, Animal Behavior Society, International Society for Anthrozoology, and International Society for Applied Ethology has opened my eyes to a world of professionals who not only use ethograms, but also use their observational skills on a daily basis, especially with husbandry and enrichment. Animal care staff in zoo and aquarium settings, as well as those professionals who conduct field research (e.g., Dr. Kay Holecamp, from Michigan State University, researches hyenas in their natural habitat), build their careers around observing and documenting behavior about wild animals in captive and natural environments.

I am a researcher. That means, partly, that I document everything. I also work as a quality assurance auditor in the bioanalytical industry with regulations from the U.S. Food and Drug Administration. That means, mostly, that I observe and then document my observations. “If it’s not documented, then it didn’t happen” is a commonly heard phrase. How true for the animal behavior field, too!

Behavior can be documented several ways with several different variables (e.g., occurrences, frequencies, durations, time of day, focal behavior vs. group behavior). Behavioral coding involves training people to observe and score behaviors in accordance with pre-determined criteria. This type of standardization is more objective than ratings on a questionnaire, which may be subjective. Often, ethograms are used in behavioral coding research so that behavioral definitions are clearly stated and the respondents are trained to observe those behaviors.

As a fellow behavior geek, I am absolutely fascinated by behavior, and am honored to be featured here in BARKS, helping the collective effort to move our profession forward with evidence-based best practices. Having spent over 14 years working professionally (over 30 years personally) with animals, I can say with confidence that these operational definitions and ethograms are imperative to being successful with sharing our homes, lives, and careers with animal companions.

This article was first published in BARKS from the Guild, September 2020, pp.24-26. For more great content on all things animal behavior and training, you can sign up for a lifetime, free of charge, subscription to the digital edition of BARKS from the Guild. If you are already a subscriber, you can view the issue here.

About the Author
Sheryl L. Walker Ph.D holds a master’s degree in behavior analysis and a Ph.D. in animal behavior and sheltering. She also operates WAGS: Wonderful Animal Guidance Services in Lafayette, Indiana, specializing in puppies. She is currently working toward her Certified Applied Animal Behaviorist (CAAB) certification, and her current research interests are puppy socialization and training.