Insecure Teenage Dogs at the Off Leash Park

Recently I got asked: “What should I do when my dog goes over to another dog, puts his head over the other dog’s shoulder and, depending on the other dog’s reaction, they will start squabbling?” So far no one got hurt. The dog is just two years old and has no previous history of aggression.

Most dogs go through a phase where they become a bit ‘stroppy’ (as we say in Australia) with other dogs in off leash situations. Anecdotal evidence suggests that male dogs may be more prone to show that kind of behavior.

A previously well socialized and easy going dog suddenly becomes a bully. His body language towards other dogs is more assertive, he might get into scraps and he does not take no for a no.

Behavior is never stable and it always changes, sometimes for the better and sometimes for the worse. The change I am talking about often happens when the owners already have a difficult time with their teenage dog. 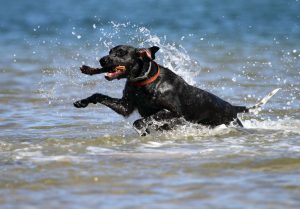 Teenager at the Dog Park

However, to reach the stability of adulthood, dogs have to go through the adolescent phase. It is a normal and even owners who have done all the right things will see this behavior change, at least to a certain extent. But it will be less of a problem than for a dog who has not been well socialized. Dogs who have learned to play hard and inappropriately – or not at all as puppies – will most likely have more problems during this phase, and might not be suitable for off leash interaction at all.

It is common for adolescent dogs to posture, stare, intrude into other dogs’ space, growl, snap and sometimes fight. After all, they are dogs and do not write letters to the editor. If no one is hurt then it is normal; if another dog gets hurt it is not. In that case we need to take action urgently and contact a qualified professional. Even if no one is hurt and your dog keeps getting into fights you need to seek professional help for you and your dog. Ian Dunbar talks about bite inhibition as one of the main factors to define the severity of the problem.  Bite inhibition is vital and can only be learned in off leash puppy play and during off leash interaction with other dogs.

While it is very upsetting for the owners, it is often a lack of confidence in the juvenile dog that causes this behavior.

When dealing with this situation, we have to keep our expectations realistic. It is unfair to expect our dogs to get along with every other dog they meet. At the age of about two they have their friends and their social group they prefer to interact with. But they need to be able to cope with unfamiliar dogs by either ignoring them or walk away after a short meet and greet. 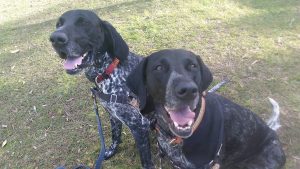 Unfortunately, the first altercation with another dog often is the end of ongoing socialization for a young dog and the beginning of a vicious cycle of the dog meeting fewer and fewer unfamiliar dogs and his reaction becoming more and more inappropriate.

As with all problems, prevention is better than cure. Your dog needs to meet and interact with other dogs from an early age. Start with a puppy class that allows for supervised and moderated off leash interaction and keep socializing your pup with safe dogs well into his teenage months. But make sure you have a balance between the off leash area and other forms of activity such as on leash walks, teenage classes, coffee shop, informal pay with you and training. It is important to let your dog know what kind of interaction you want and praise/reward every successful meeting with other dogs.

Teach a 100 % or at least 99 % reliable recall. Many dogs do not come back when called because there is not enough in it for them. If you only call your dog when you are going home, he will quickly learn that come means the end of fun and may refuse to come back when called. Or, if you ask him to sit instead of rewarding the coming back, the recall will become slower and less reliable. Another reason for sluggish recalls is low value treats or the reliability is compromised by raising criteria (distance or distraction) too quickly.

Coming Back or Flying Back?

Keep arousal levels low! If your dog gets excited when you approach the dog park, make sure you calm him down with some fun training before he is allowed to play with his mates. The best way to keep arousal levels low is to interrupt play and call your dog to you. When he comes back reward generously, play with him, calm things down and then let him go again. Letting dogs run unsupervised and un-managed while the owners have a social time or are on the phone is a recipe for a disaster.

Watch your dog’s and other dogs’ body language. There are a lot of signs that play is getting out of control: raised hackles, ears are back and down, the interaction is one sided, no pausing, no play bows, raised intensity, to name a few. If we watch closely there are early signs of stress like lip licking or yawning, turning away or trying to get away, even before we see an increase in the intensity. Watch for play bows, raised paws, play face, ebb and flow, and relaxed bodies to make sure all is going well. Be aware that a wagging tail does not necessarily mean a happy dog.

Coming back to the original question: What should I do when my dog goes over to another dog and puts his head over his shoulder? Often this happens after the two dogs have already started staring or eyeballing each other, they might move slowly, circle each other, or show early signs of stress. When one dog puts his head on another dog’s shoulder we have most likely missed a lot of communication going on between these two dogs and a lot of stress signs. For one reason or another, these two dogs do not like each other.

It also means we are too late and it is an emergency.  Immediately call your dog back to you and reward. Then redirect your dog to another play mate or if the dog is stressed and aroused you might just head off for a nice on leash walk. It is often better to intervene early and calmly by redirecting before the behavior escalates. However, often the owners are not watching, then panic, run over, grab and reprimand the dog. This will most likely make it worse because the dog is now associating the other dog with even more negative emotions. Another risk is that the dog generalizes to a person nearby, the location, or a sound. The dog is now not only scared of the other dog but potentially of a lot of other things, too.

To put it bluntly, we should have redirected our dog long before he went over to the other dog but we didn’t because we did not supervise properly and we missed the early warning signs.

Maybe the question should have been: How do I prevent my dog from going over to another dog and put his head on the other dog’s shoulder?