Global Educational Campaign and Website Launch the Week of March 27, 2017 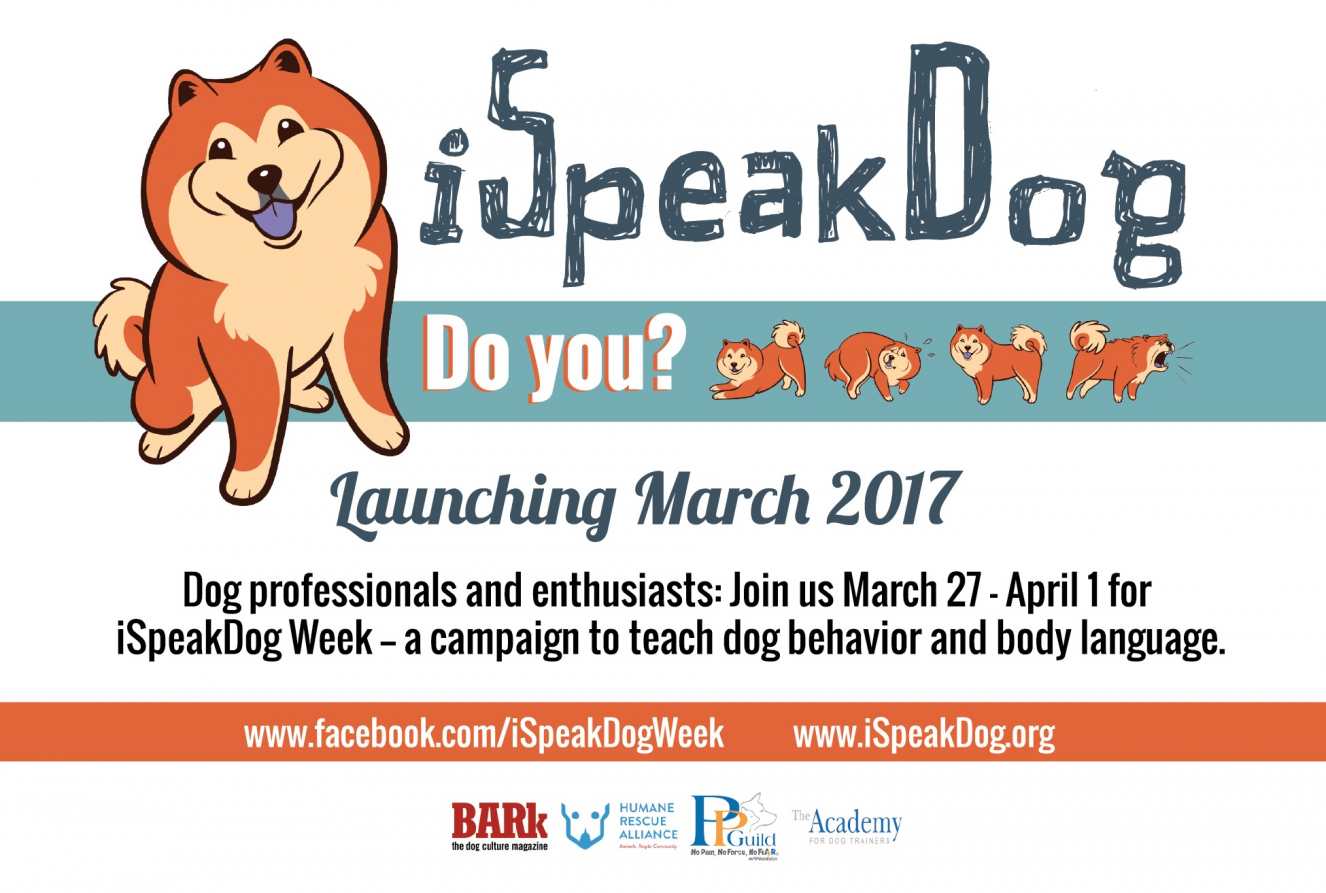 WESLEY CHAPEL, Fla. – March 27, 2017 – To help improve the relationship people have with their dogs, The Academy for Dog Trainers, the Humane Rescue Alliance, The Bark Magazine, and The Pet Professional Guild have teamed up to launch iSpeakDog, a global campaign and website designed to educate people about dog body language and behavior.

iSpeakDog, which has launched as a weeklong campaign March 27 – April 2, 2017, comes at a time when canine behavior is being studied more than ever — revealing that people often misinterpret what their dogs are doing and saying. Sadly, millions of dogs are punished and even relinquished to shelters each year because of perceived “behavior problems,” which are often simply dogs being dogs.

“When people understand and appreciate dogs for the species that they are, that’s when the fun really starts,” says Jean Donaldson, founder of The Academy for Dog Trainers and author of Culture Clash. “Dogs chew and dig and bark and jump because these things are enjoyable to them, not because of some power struggle. With iSpeakDog, our goal is to empower people to separate out all the bad information that floods the Internet and media, and help them learn the truth about their pups so that they can respond more effectively and compassionately.”

The website, iSpeakDog.org, will teach people how to figure out for themselves what their dogs are doing and why. The site will break down the common behaviors shown by dogs that tend to frustrate their guardians (i.e. jumping up on people, chewing shoes and pulling on leash) and explain the different emotional states that can drive such behavior (i.e. growling and snapping is often a sign that the dog is scared).

To test if there really is a knowledge gap between what people think their dogs are doing and what is really happening, Alexandra Horowitz, renowned ethologist and bestselling author of Inside a Dog, conducted a study in 2009. She tested whether the infamous “guilty look” that many people claim to see in their dogs after they urinate on the rug or tear up the couch is, in fact, a look of guilt. Her research found that it was not. Instead, the look represented dogs who were afraid of being punished.

Along those same lines, there are numerous videos online and on TV of dogs “being funny,” but more often than not, the dogs in the videos are actually scared.

“We hope to clear up some of the long-standing misconceptions that exist about dog behavior,” says iSpeakDog founder, Tracy Krulik. “By bridging the communication gap between people and their dogs, iSpeakDog has the potential to strengthen their bond and ultimately keep more dogs in homes. It’s thrilling to see canine professionals and dog lovers from all over the world signing up to participate in iSpeakDog Week to help spread the truth.”

The iSpeakDog campaign will include dog behavior and body language educational opportunities across the globe — including a free webinar on “How to Speak Dog,” on Tuesday, March 28 at 6 p.m. E.T. (iSpeakDog.org) — as well as social media events including Ask the Expert on Facebook.

The iSpeakDog website includes a campaign toolkit for individuals and organizations wanting to promote the global campaign, which currently has participants in 26 states plus the District of Columbia, and around the world in England, Greece, Brazil, Malaysia, Hong Kong and Australia, among other countries.