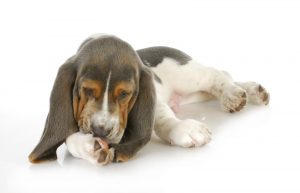 The results of the study by author Dr. Harvey and colleagues support acceptance of their hypothesis that dogs with skin allergies would exhibit more problem behaviors, lower scores for trainability and no differences for generic fearful or environmentally anxious behavior © Can Stock Photo / Colecanstock

The relationship between stress, behavior and animal health is complex and varied. Chronic, long-term stress interacts in various ways with personality type, behavior and immune health in both people and nonhuman animals. It’s not often straightforward to decipher which causes which when we evaluate chronic stress and health, however.

Links between Stress, Behavior and Health

1) Behavioral traits affecting immune traits: An example of this would be increased exploratory behavior leading to increased exposure to immune antigens or access to a wider variety of food, impacting nutrition and the gut microbiome.

3) Something else that affects one can simultaneously affect the other: This is when another event causes changes to both the immune response and behavior.

Stress (physical and psychological) is one of those things that falls into the third category. Stress disrupts homeostasis (the complex functions through which the body self-regulates to maintain a stable state suitable for survival), and this disruption can affect both the immune system and behavior.

Normally, this disruption is short-lived and adaptive, as the changes to homeostasis and alterations to behavior may help an animal to escape or deal with a stressor (such as a predator or environmental challenge). This form of adaptive stress is known as eustress. However, when stress becomes long-term, homeostasis is altered for longer than is adaptive and leads to distress.

Chronic stress (distress) is implicated as a risk factor in a number of health conditions from cancer to heart disease (Maddock & Pariante, 2001) and in people, chronic stress is also a factor in the development of various psychopathologies such as clinical depression and post-traumatic stress disorder (Marin et al., 2011).

Stress and the Skin

Skin conditions have long been considered to be indicators of psychological distress although only recently has evidence for this begun to accrue. A growing number of research studies now provide evidence that emotional stress is linked to skin conditions such as atopic dermatitis.

The implications of these findings suggest that emotional stress could be an inducer of impaired skin barrier function, which for animals that suffer from inflammatory skin conditions suggests that emotional stress could precede or worsen flare-ups in their condition. An individual’s personality type (defined as consistent between individual differences in behavior), could also influence how they cope with stress, which may put them at more or less risk of developing stress-induced conditions.

While the research discussed above suggests that stress can directly impact skin health, stress is also related to skin health in the other direction. It has been suggested that when animals are injured or diseased, they may be more likely to respond to aspects of their environment pessimistically, meaning their threshold for experiencing emotional stress may be lowered.

Stress and Atopic Dermatitis in Dogs

Canine atopic dermatitis (cAD) is a chronic allergic skin condition that is characterized by sustained periods of pruritus (itching), inflammation and often, secondary infections. Although it doesn’t get a lot of attention as a dog health problem, it’s a very common one, affecting at least 10% of pet dogs.

The sensation of itching itself is an aversive subjective sensation that provokes a response to scratch the itchy area. In people, itchy inflammatory skin conditions, including atopic dermatitis, have negative impacts on their quality of life (e.g. Reich et al., 2010; Tey et al., 2013); and cAD has been shown to be associated with reduced quality of life for both affected dogs and their guardians (Noli et al., 2011).

But what about dogs? Could our itchy dogs be suffering from heightened stress as a result of their condition? Scores for “nonsocial fear” and separation-related behavior gathered by the well-validated canine behavior and research questionnaire (C-BARQ) have been linked with both the incidence and severity of generic, unspecified, skin problems (Dreschel, 2010), but in a different study no association was found between itch severity and generally anxious/fearful behavior or aggression in pruritic dogs (Klinck et al., 2008).

To investigate the possible links between dog behavior and cAD associated pruritus, my own research group studied the behavior of dogs with and without cAD in two popular pet dog breeds, Labrador and golden retrievers, using guardian observed behavior as a proxy for underlying stress (Harvey et al., 2019).

We asked the guardians of a pool of over 4,000 Labrador and golden retrievers to complete the C-BARQ alongside an in-depth questionnaire on their dogs’ skin health (the full paper, Behavioural Differences in Dogs with Atopic Dermatitis Suggest Stress Could Be a Significant Problem Associated with Chronic Pruritus, can be freely accessed).

Our aim was to see whether dogs with a diagnosis of cAD (cases) would have different behavioral traits from dogs of the same breeds with no skin health problems (controls). We tested two competing hypotheses for what we might expect to see in the results depending on whether stress may have been primarily or secondarily associated with the dogs’ skin allergies:

1) The First Hypothesis: If psychological stress preceded the dogs’ skin allergies then we would expect the case dogs to have higher scores for traits linked to neuroticism/general fearfulness, which may therefore have lowered their ability to cope with stressors and exacerbated the physical impacts on skin barrier function.

2) The Second Hypothesis: If psychological stress develops secondarily as a result of pruritus, we would expect dogs with more severe pruritus from cAD to have higher scores for stress-related behavioral problems (such as greater frequency of displacement and self-directed behavior), lower scores for trainability (as trainability requires a dog to attend to and sustain its attention to training tasks, which pruritus may be interrupting) and that these dogs would not differ from controls on trait-level scores for neuroticism/general fearfulness.

We analyzed behavioral data for 343 dogs with a diagnosis of cAD, and 552 healthy dogs, and compared their behavior alongside scores representing the severity of the itching experienced by the dogs. Our results showed, for the first time, that itch severity in dogs with cAD was associated with more frequent problem behavior, which could suggest a link between the severity of the itching and psychological stress in dogs suffering from cAD (Harvey et al., 2019).

The results of our study support acceptance of the second hypothesis, where we predicted dogs with skin allergies would exhibit more problem behaviors, lower scores for trainability and no differences for generic fearful or environmentally anxious behavior. Specifically, the atopic dogs in our study scored higher than controls for a number of everyday problem behaviors (mounting, coprophagia, hyperactive/restlessness, pulling excessively on the lead), displayed more comfort-seeking behaviors (attachment/attention-seeking, begging for food), behavior likely to be directly related to pruritus (self-grooming, allo-grooming, touch sensitivity), and ‘other repetitive behavior.’

The dogs with cAD also scored lower on trainability, which may be due to reduced focus from pruritus distracting their attention (alternatively, this could be related to any medication they may be on). Our results indicate that the dogs diagnosed with cAD may be experiencing low-level chronic stress as a result of their chronic pruritus.

As the results of this study are correlational and cross-sectional, we cannot know from this study whether the itch sensation directly caused the observed differences (as opposed to being associated with itching as a result of other indirect factors such as, for example, disrupted sleep or medication).

However, scores for itch severity were also strongly linked with increased scores on the same behaviors that were associated with cAD diagnosis, meaning that the behaviors were seen more frequently for dogs with more severe itch-related behavior (itch severity was associated with lower scores for trainability and with higher scores for destructive behavior, mounting, coprophagia, hyperactivity/restlessness, pulling excessively on the lead, attachment/attention-seeking, begging for food, self-grooming, allogrooming, ‘other repetitive behavior’ and touch sensitivity).

The behaviors that were associated with cAD diagnosis and itch severity were also largely comprised of redirected behaviors.

Self- and environment-directed behaviors can be a consequence of long-term exposure to aversive conditions. If the stressor cannot be dealt with, or the motivation cannot be met, animals can express redirected behaviors where actions are redirected towards other stimuli, leading to behaviors such as excessive grooming (of the self and others), coprophagia, hyperactivity, overeating and, in extreme situations, stereotypic repetitive functionless behavior (Notari, 2009), just as we saw in our study.

Excessive licking of people, other animals or inanimate objects (allogrooming) and self-grooming as scored on the C-BARQ were strongly associated with itch severity, meaning that excessive self- and allogrooming could be good behavioral indicators of pruritus.

The sorts of behavior reported by the dog guardians in our study are often considered problematic, and as we all know, problem behaviors can have detrimental effects on the relationship between guardian and dog. As such, it’s important for guardians of itchy dogs to know that their dog’s behavioral problems may be linked to their itchy skin, as opposed to being an attribute of the dog’s character.

While further investigation is needed to ascertain causality, there is a large amount of evidence already available demonstrating the impact of stress on skin barrier function, and the increased stress reported by human patients with atopic dermatitis. It is, therefore, plausible that dogs also experience psychological distress as a result of pruritus, and that for dogs with cAD and other pruritic skin conditions, this could prolong or worsen allergic flares.

These results support previous calls for the treatment of allergic skin problems in dogs and other animals to include management of environmental stressors, with the aim of reducing the overall stress burden for the animals (Mills et al., 2014).

This article was first published in BARKS from the Guild, January 2021, pp.22-25. Read the full article Itchy Dog or Stressed Dog?

About the Author
Dr. Naomi D. Harvey BSc PhD AFHEA is a zoologist with a specialty in applied animal behavior and veterinary health and welfare. Since November 2019, she has been working at The Dogs Trust, the UK’s largest dog welfare charity, as a research manager in canine behavior and she holds an honorary position as an associate professor of companion animal behavior and welfare at the University of Nottingham, England. With a BSc in zoology from Cardiff University, Wales and a Ph.D in applied canine behavior from the University of Nottingham, Dr. Harvey has a particular specialty in designing and validating methods for securing robust and valid measures of animal behavior from their guardians.

She also has expertise in veterinary epidemiology, having successfully designed and led the Itchy Dog Project to investigate the environmental and genetic risk factors for canine atopic dermatitis and its impact on dog behavior. Her research interests lie in improving the evidence base for issues affecting companion animal welfare within the fields of veterinary medicine and clinical animal behavior, to better inform how we manage and treat the animals in our care. Her Ph.D focused on how behavior develops in juvenile guide dogs, and as such, she has a particular interest in the adolescent phase of development and what it could mean for our pets.