It’s Not Painful. It’s Not Scary. It Just Gets the Dog’s Attention! 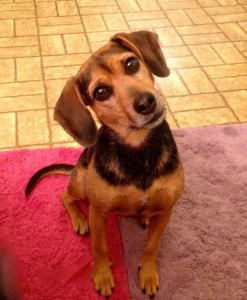 Some dog trainers who use tools such as shock, prong, or slip collars, or startle the dog with thrown objects or loud noises, claim that these things are done only to “get the dog’s attention.” They may further insist that the dog is not hurt, bothered, or scared.

This sounds like the Holy Grail of dog training. It’s the Magical Attention Signal! It can get your dog’s attention, get him to do something, or stop doing something, all rolled into one. You don’t have to use those pesky treats or toys, and it certainly doesn’t hurt or bother the dog!

Gosh, who wouldn’t want that? Life would be so easy with the Magical Attention Signal!

We almost never want only our dog’s attention.

Let’s say that your Magical Attention Signal is tossing a lightweight coaster towards your dog. Your dog doesn’t particularly care about coasters. (Folks with disc-crazy dogs, hang on, I’ll get to you.) So you toss the coaster and the dog looks up. Yay, success! You’ve got the dog’s attention. Mission accomplished!

Um, no. Of course we don’t want only the dog’s attention. When we want their attention, it’s for a reason. The reason is almost always one of two things: to get them to do something or stop doing something. Getting their attention is only the bare beginning.

Non-predictive stimuli are subject to habituation.

Virtually all of us have experienced habituation to something that was initially novel. Let’s say you move to a new house. It’s barely within earshot of an elevated train or metro track. When you first move in, you notice the sound of the train regularly: maybe a whistle, or just the rumble.

At first it gets your attention. However, it gradually sinks in that there are no relevant consequences to that sound for you. The train schedule doesn’t affect vehicle or pedestrian traffic in any way. You don’t have to arrange your day around it. None of your loved ones ride it or work for the railroad. The noise is faint and there aren’t any noxious fumes. It doesn’t predict danger. In fact the train noise doesn’t predict anything for you, good or bad.

So what happens to the stimulus of train noise?  Habituation. You stop noticing it. It fades into the background. Our minds sift through stuff all the time to determine predictors of good and bad consequences. Things to seek and things to avoid. Low-intensity stimuli with no consequences fall to the bottom of the priority stack.*

Animals, including dogs, do this sifting too. Some dogs are noticeably good at it, like my Clara, who often knows my behavior patterns better than I do. And when you think about it, loads of the stuff we humans do has some kind of predictive value to our dogs. Turning on the TV. Getting dressed. Opening the refrigerator. Sighing. Even pulling down a book from the bookshelf.

I had a hard time thinking of a regularly occurring non-predictive stimulus in my life with my dogs, but here’s one. For my own dogs, the automatic switching on and off the the central heating and air means nothing. They hear it intermittently all day long, but it is just background noise to them. If the temperature weren’t well controlled, or if one of them was extremely hot- or cold-natured, she might start to notice and take the opportunity to go lie next to the air vent. Then the sound of the heat and air clicking on would become predictive, and start rising up in the stack of “things to notice.”

So the upshot is that if we want our dogs to keep responding to a stimulus, it generally has to be quite strong in itself, or have a consequence. Good or bad, your choice. But not neutral.

There are four relevant possibilities:

By the way, #4 illustrates the concept of the “punishment callus.” One of the paradoxical problems with using an aversive is that most people want to start out light. But if you try that on strongly entrenched dog behaviors like barking, digging, or jumping up, the behavior may well prove to be too strong. Then you will be in the position of having to escalate. And often the dog’s ability to tolerate the aversive will escalate right alongside.

Many promoters of aversive tools to use in dog training don’t want to say that they ever hurt or scare or startle or nag or bully dogs. And our mythology about dogs is so strong that most of us want to believe them. Hence, the lure of the magic signal that works all by itself, with no other consequences. I hope this post will bolster your “nonsense detector.” Behavior is driven by consequences. If no change in consequences occurs, there is no reason for a behavior to change.

The Magical Attention Signal is not going give any lasting help on its own. Learning theory and common sense (if only we could apply it when we think about dogs!) tell us that behavior has consequences. We take actions for a reason. We act to get stuff we want. To avoid stuff we don’t like. All creatures with a brain stem, and more primitive creatures as well, from what I hear, do this.

Rapt attention in the backyard 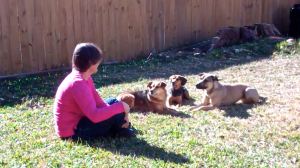 Rapt attention in the back yard

But the good news: if you keep conscious control of the reinforcers in your life with your dogs, use those reinforcers to strengthen behaviors you like, teach alternatives to behaviors that you don’t, you will have a head start on getting great attention from your dog.

All photos except the one of my dog Zani and the one with my three dogs are courtesy of Wikimedia Commons. The boxer photo was cropped.

**We could also add, looking at the four quadrants, that the thrown coaster could predict the cessation of something aversive, or the removal of something good.  But I think these are pretty unlikely usages.