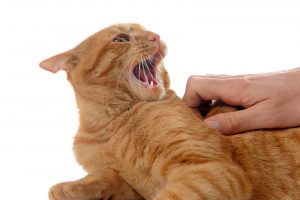 Aggression in cats. It’s a sensitive and difficult issue for many cat owners and one that can lead to relinquishment or even euthanasia – particularly when the behavior is directed towards the humans of the household. In such situations, in my experience at least, the blame is often placed directly on the cat itself. I have lost count of the number of owners who have contacted me about their cat’s aggressive behavior, saying the cat is “wired wrong” (or called them various names which aren’t fit for publishing).

All too often, that blame is misguided. But try as I might, it is very difficult to convince some owners that their behavior may actually be playing a role in that of their cats. In such cases, people find it almost impossible to believe that how they interact with their cats, the resources they provide for them, and how they react to unwanted behaviors could be directly influencing how their cats
behave.

And so, as always, I turn to the science to provide evidence, which is why I welcome a new study from the Ontario Veterinary College at the University of Guelph in Canada. Published earlier this year by O’Hanley and colleagues, the study gives some much-needed support to the notion that it may be cat owners – and not just the cats themselves, their genetics and early life experiences – who also play a role in cat aggression.

This outcome was actually an accidental finding. The study was originally designed to assess whether early experiences as a kitten in a shelter contributed to aggressive behavior as an adult cat. But what the researchers uncovered was evidence to support the notion that owners who use aggressive training or behavior management techniques – including yelling at the cat and shouting “no,” or holding them by the scruff of the neck – tend to end up with an aggressive cat.

Surprised? No – me neither. But, with research into cat behavior only just beginning to become more prevalent in recent years, studies such as this finally give cat behavior consultants like me some solid evidence for convincing owners that the way they care for and manage their cats can have a direct influence on the cats’ behavior.

Now, to be fair, a cat’s personality is built on a number of factors that we now know includes their genetics, prenatal stress experienced by the mother, as well as the experiences they had during the critical socialization period of between 2 and 7 weeks of age (Atkinson, 2018, pp.66-72). Cats that show signs of anxiety from an early age (from 8 weeks onwards) have likely acquired this anxiety either genetically or from negative experiences as very young kittens – or as a combination of both.

Anxiety can reveal itself in a range of behaviors in such cats, one of which is aggression towards people or other animals. But what the Guelph study points to is the potential for aggressive behavior to also develop as a result of how the cat is managed and provided for by their owner.

The study surveyed 260 owners of cats aged 1 to 6 years, who were adopted as kittens from shelters. The owners were asked a range of questions on their cat’s current behavior, their social interactions and home environment.

Also, “…the odds of severe aggression toward other animals were increased when the owner indicated there were other pets living in the household and when owners reported using positive punishment, and lower when provided with training enrichment.” (O’Hanley et al., 2021).

Let’s recap what positive reinforcement is as opposed to positive punishment. Well, the simple explanation is that positive reinforcement adds something pleasant to a situation to increase the likelihood of a desired behavior reoccurring. Positive punishment, on the other hand, adds something unpleasant to a situation to decrease the likelihood of an undesired behavior recurring.

Let’s take a common cat behavior issue as an example. Counter surfing (i.e., cats hanging around on counter tops in the kitchen) is seen as an undesired behavior by many owners. An owner using positive reinforcement would offer the cat an alternative to the counter such as a cat tree or bar stool near the counter (a viewing point to see what’s happening) and then reward them for using the alternative (via a tasty treat or petting for example). By adding something pleasant (the tasty treat or petting) when the cat is doing the desired behavior (using the alternative to the counter), the owner increases the likelihood that the cat will continue to use the alternative and not be on the kitchen counter.

At the other end of the spectrum, another owner may use positive punishment in reaction to the counter surfing and add something unpleasant (for example, yelling at the cat, shouting “no,” scruffing them to remove them, or using a water bottle to squirt them). This, they believe, will stop the cat from getting on the counter “because they know it’s wrong and they will be punished.”

Unfortunately, in my experience, all this technique does is ruin the relationship between the cat and the owner, possibly cause fear and anxiety, and usually leads to the cat surfing the counter when the owner isn’t present anyway. The study by O’Hanley et al. goes a little further by revealing that aggressive techniques such as these can also lead to aggressive behavior from the cat towards their owner – and other animals in the household.

It’s important to note that this is just a starting point in an important area of research, and much more is needed. The researchers themselves state that their findings “highlight several potential areas for future research, and for owner education to reduce cat aggression.” (O’Hanley et al., 2021). But we have to start somewhere.

My point is, as a cat behavior consultant who advocates force-free, positive reinforcement for felines, as well as the importance of enriching environments which offer safety, security and choice, I have long believed what this latest study points to: that how we manage our cats and what we provide for them can have a direct impact on their behavior.

This does not discount the fact that the undesired behavior may have some connection to the cat’s genetics and early life experiences. However, if we are fulfilling a cat’s needs on all levels in terms of physical environment, enrichment, nutrition, social interaction and choice, we have a far better chance of not only modifying their behavior, but also preventing other unwanted behaviors arising.

If we offer a positive, loving, enriching environment and positive reinforcement in our training and behavior management techniques, we are far less likely to have issues with cat aggression directed at us or others in the household.

If we offer punishment in our responses and meld this with a boring, human-centric environment which does not provide enrichment or choice, then the likelihood of behavior issues, including aggression, increases, as do any number of other issues, including inappropriate toileting.

Studies such as the one by O’Hanley and colleagues not only give me a sense of satisfaction that my personal theories are correct, but they also add some scientific credibility to what I propose in my action plans and management strategies for clients. These plans and strategies always include recommendations for increasing enrichment and choice and using positive reinforcement for desired behavior.

If such studies can help me convince even one owner that by modifying their own behavior towards their cats, they will in turn modify their cats’ behavior, then I can only applaud them, and excitedly anticipate more research to come.

This article was first published in BARKS from the Guild, September 2021, pp.44-45. Read the full article