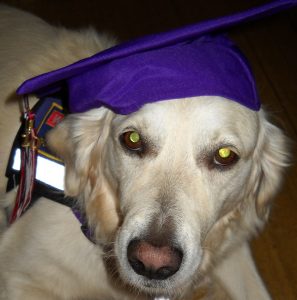 That dogs have feelings, emotions, and thoughts probably seems obvious to PPG members and readers of my Thinking Dog Blog and to most people who share their lives with pets. But, as I tell my students at Bergin U, sometimes things need the stamp of approval of science, via peer-reviewed research, to be fully accepted as Truth. Many, many studies of dogs’ behavior and cognitive abilities do not, actually, reveal anything that we didn’t already “know.” But these studies solidify that knowledge and induct it into the Body of Knowledge that gets academic credit, credibility, proof.

That’s why the establishment of a new open-access, peer-reviewed journal dedicated to the study of animal sentience is significant. Over the past twenty years or so, more and more scientists — ethologists, behaviorists, psychologists and others — have studied the thoughts, emotions, and abilities of more and more species of nonhuman animals. These studies are published in animal behavior journals, in Science, by PLoS One, in psychology journals — and now, in their own journal. Animal Sentience: An Interdisciplinary Journal on Animal Feeling is a publication of the Humane Society Institute for Science and Policy (HSISP), based in Washington D.C.

The journal is published online and is aimed at “all who are concerned with the current empirical findings on what, when and how nonhuman animals feel, along with the practical, methodological, legal, ethical, sociological, theological and philosophical implications of the findings.”

Alva Noë, a philosopher who wrote about the new journal for NPR, says in the NPR article that “A new scientific journal is not merely a new venue for publishing research, it can encourage new science, create a new community of investigators and, to some degree, contribute to the establishing of new fields.”

That’s an exciting thought for people who care about nonhuman animals — and dogs in particular. For centuries, dogs were not considered worthy of academic study. Now, several universities host canine cognition labs; at Bergin U and elsewhere, students study the canine mind, along with canine behavior and communication, as they explore ways to expand the human-canine partnership.

Recognizing the abilities of dogs (and other nonhumans) to experience pain was the beginning of anti-cruelty laws, thanks to 18th-century philosopher Jeremy Bentham’s observation: “The question is not, Can they reason? nor, Can they talk? but, Can they suffer?” Moving beyond that, we now know that some species of animals use language, invent and use tools — and teach other members of their families and communities these skills; we also know that many species experience a wide range of emotions that are strikingly similar to human emotions. The journal embraces a broad definition of sentience or “feeling”: “Feeling can be any sensation, such as seeing, hearing, touching, tasting, smelling, moving, wanting, pain, pleasure, emotion, mood, anticipation or intention.” Intention. Anticipation. I know that my dogs experience these higher-level “feelings.” I also know that generations of researchers have been ridiculed for asserting that dogs (or any nonhumans) could.

As human acknowledgement of nonhumans’ sentience grows, the way they are treated, both legally and ethically, has also changed. As dog professionals, we work toward a world where people teach dogs using motivations and rewards, not force; where people strive to offer their pets a high quality of life that includes cognitive challenges and stimulation as well as physical exercise. It’s nice to welcome mainstream academia and science along for the ride.