Just Say No to Saying “NO!” 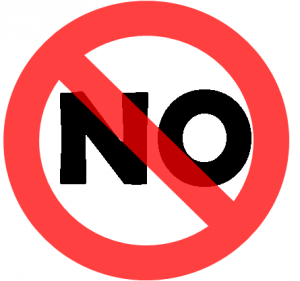 It’s almost a reflex. There goes Rover, in hot pursuit of the cat, or gnawing on the sofa, or slurping at your dinner plate, or barking threats at squirrels…and we just need it to STOP, so we shout “NO!”

Then one of several things happens: The behavior pauses for a split second, then resumes. Or, if you have a “soft” dog whose feelings are easily bruised, he’ll hang his head and beg for forgiveness–knowing you’re displeased but not necessarily knowing why. An independent and tenacious dog like mine will assume you’re talking to someone else and keep right on going. 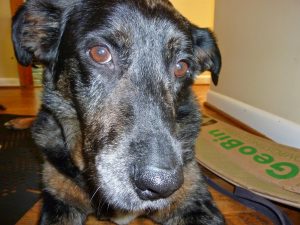 What does “NO” mean to our dogs? Do they think, uh-oh, she’s mad about something…better appease her with my pleading Bambi eyes? Maybe they guess you don’t want them doing this behavior in front of you, so they should do it when you’re not around? Possibly, they know you mean “Knock it off!!” but they don’t know of another outlet for their energy or another behavior to fulfill the function of the annoying one.

To us, “NO!” means “Stop doing that right now AND stop doing it forever!” But “NO” isn’t a trained cue, like “sit” or “down,” that relays information about what to do. It’s a loud, startling noise. It’s a release of tension that brings brief relief to the yeller. But it almost never teaches our dog to cut it out for good.

And if I shout my dog’s name, too–as in “HUCKLEBERRY, NO!”–that’s a double whammy of counterproductive training. For one thing, the unwanted behavior is reinforcing (rewarding) to Huckleberry; otherwise she wouldn’t do it. And since “NO!” doesn’t prevent her from doing it in the future, this behavior just gets stronger with every repetition. Then there’s the added problem that I’ve taken Huckleberry’s name in vain.

We know we’re always supposed to say our dogs’ names with sing-song-y enthusiasm, so they associate their name with joy and joyful things. When I bellow at Huckleberry with rancor in my voice, I tarnish the luster of her name a little, sully it a bit with unpleasant associations. Too much of that, and she may decide the sound of her name is something to tune out rather than welcome.

So…if we want a permanent solution to a problem behavior, rather than a fleeting cessation of our dogs’ annoying shenanigans, we need a better way. 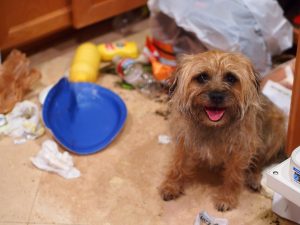 What if, every time you’re ready to scold with a “NO!”, you cheerfully call his name instead? If you’ve trained him to react instantly and eagerly to the sound of his name, he’ll wonder what you want and tune in excitedly to find out. Once you’ve got his attention, redirect him to something else: “ Rover …instead of rooting around in the trash can, why don’t you come play tug with me, or chase your ball down the stairs?”

The simplest, most rudimentary remedy is “interrupt and redirect.” But instead of interrupting with a harsh “NO!” you interrupt with your dog’s favorite word–his own name–and then engage him in something even better than trash, or at least just as fun. (And then put the trash can out of his reach.) 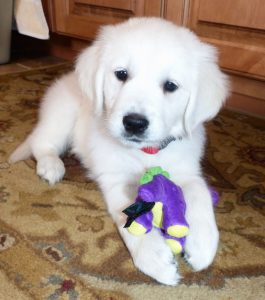 Do you hate it when your dog jumps up on people? Saying “NO!” won’t tell him what to do instead of jumping. Teach him a rock solid “sit,” and sitting will (with plenty of practice and rewards) replace jumping. Is your puppy scarring you with his savage little shark teeth? Train him to bring you a toy. Sick and tired of your dog begging at the table? Teach him to go to his bed and stay there, and let him lick the plates when you’re done.

It’ll take time, effort, patience, and a whole mess of hot dogs. Start easy, do short sessions, and make things harder one baby step at a time. Be understanding. We’re asking our dog to quit a habit that’s almost certainly a natural canine behavior, just because we don’t like it. That demands a lot of self-control. Did you ever try to quit smoking, go on a diet, control your temper, or stop yourself from buying something you couldn’t afford? Then you can sort of empathize.

Here are a couple personal examples, starting with my cat Cato, an incorrigible door dasher. He foiled every attempt to block him. Finally I realized he needed an alternative behavior. What did I want him to do instead of bolting out the door? How about go to the bottom of the stairs of our split foyer entrance. Now when I go to the door, Cato runs down the stairs and waits. I toss him a palmful of kibbles and he scrabbles around searching for them. This buys me plenty of time to slip out. 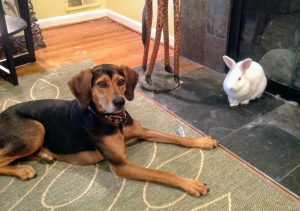 Here’s another. In the past, Huckleberry could hardly resist my rabbits. If she got into their pen, she’d chase them. If they took cover in one of their many Amazon boxes, she’d get frustrated and bark like mad. Scary for them, super irritating for me.

What should she do instead? Lie down quietly. I trained her to settle on a mat outside the pen, and then inside the pen but still at a good distance from the rabbits, and then gradually decreased the distance until she could be right next to them and still stay put on her mat.

I need to keep her in practice, because the biological imperative to chase bunnies is so nearly irresistible. When I slack off, the chasing and barking resume. Most of the time I just keep Huckleberry out, so it’s not an issue. When we’ve been working on this a lot, she’ll sometimes lie down right outside the pen (or inside, if the gate’s been left ajar) and wait for me to notice what an angel she is.

What does your dog do that drives you crazy? What’s your strategy for curtailing those unwanted behaviors? What alternative behaviors have you trained your dog to do? Let me know what solutions you’ve come up with. 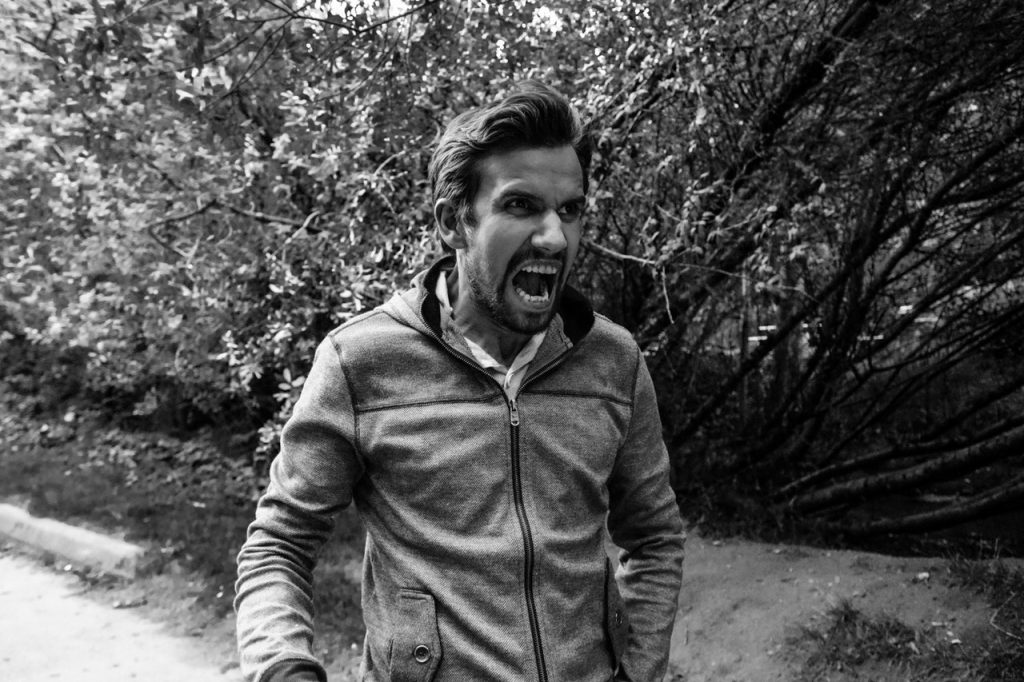 “Stop saying NO to your dog!”
from pexels.com