In January the Humane Society International brokered a deal with a farmer in South Korea who had been raising dogs for food. In exchange for funds to convert his operation to blueberry cultivation, he surrendered his twenty three dogs into their custody. Next thing they knew, the dogs were departing Seoul on a trans-Pacific flight to Washington, D.C., where they were divvied up among six area animal shelters, including the one where I volunteer.

I confess, my reaction to this news was mixed. I’m a sucker for a happy ending; I just wasn’t 100% sure we’d get there. These dogs had spent their entire lives in cramped kennels with little human contact and almost no exposure to the outside world. Then they’d endured seventeen hours in the cargo hold of an airplane, and the culture shock of a foreign country and its barrage of foreign smells, sights and sounds.  And though presumably it was a vast improvement over the conditions they’d left behind, life in an animal shelter is notoriously stressful even for the most bomb-proof dog. 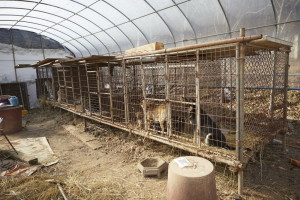 The drama of their story would no doubt tug at the heartstrings of legions of potential adopters, but which ones had what it would take to redeem these troubled souls with all their emotional baggage? Still, we all know countless examples of dogs who’ve thrived when given a second chance.  I was lucky to have a front row seat to watch events unfold up close and personal. 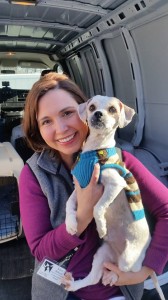 My shelter took in three dogs. Billy was a gregarious curly haired lapdog mix with a pronounced underbite and pleading eyes. He was so well adjusted and “normal” that he had us convinced he was someone’s pet who’d been snatched off the street. Chipper and cuddly, Billy immediately had his own fan club. Adopters lined up to vie for him, and he flew out of the shelter and into a new loving home within days of going up on view.

The other two dogs were more what you might expect. Abi, a Corgi mix, was social but worried. She’d eagerly approach the front of her kennel to greet passers by, but got concerned and twitchy when anyone entered her kennel or, heaven forbid, reached toward her. Abi amused herself by escaping through a weak spot in the fencing of her run and wandering the corridors. She was a beguiling blend of shy and wiley.

Our third dog, Hope, a Korean Jindo mix, looked and acted like a street dog. She was skittish, hyper vigilant, and aloof. She didn’t solicit attention from people. She stood vigil at the front of her kennel waiting for something scary to happen, and startled at every sound. A couple things were working strongly in her favor, though. Because she was very food motivated and a quick study, we could start basic training and give her some much-needed mental stimulation. Also, she was great with other dogs. Like so many under-socialized, fearful dogs, she found solace in companionship with others of her own kind. Shy dogs can take cues from their more confident peers and pals, playing monkey-see-monkey-do to learn what and whom to trust. When Hope had a chance to romp with other shelter dogs during supervised play groups, she was truly in her element.

A Plan for Hope

At the shelter’s request, I put together a training plan for Hope that everyone caring for her could follow. It focused on fundamentals for fearful dogs: “find it!”, “touch” (hand targeting), eye contact, and responding to her name. Giving anxious dogs lots of simple tasks gives their brains an invigorating workout and helps them build confidence, trust, and positive associations with the behaviors, the trainer, and people in general. 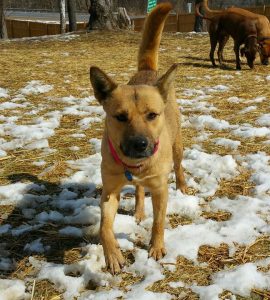 “Find it!” is one of my all-time favorites. Just say “find it!” and scatter a handful of treats. Dogs quickly learn to stop whatever they’re doing or feeling, and start doing what dogs do best–using their nose to find food on the ground. This can instantly snap a dog out of a tense moment, a reactive barking fit, or a staring contest with another dog. Of course it needs to be practiced in a low-distraction, low-stress environment to get it fluent, but once it is, it’s a very effective way to break off an emotional freak-out and get a dog into thinking mode again.

Hand targeting is another great behavior for worried dogs, especially those who are hand-shy. It gives them a way to take charge of contact with hands, to choose to interact with them and experience a rewarding consequence (i.e. treats). Over time a positive association with reaching hands can develop–hands coming toward them means an opportunity to nose-touch them, which will earn a reward. What’s not to like?

Eye contact can be scary and threatening for fearful dogs. I like to capture it when it’s offered, however fleetingly, and then start cuing it with a hand signal as I build more of a rapport with the dog I’m working with. It’s a pretty simple behavior for dogs to learn, and as you build more duration, you can see a worried dog becoming more and more at ease with the intimacy of the interaction.

Hope made fast progress with training, but winning her trust was slow going. In my three weeks working with her, she never solicited attention, and certainly not petting. I joke that resisting petting a dog is my superpower. I’m wired just like any dog lover: I crave connection with dogs; I want to reach out and touch. The more fearful they are, the stronger my maternal urge to nurture them. But a fearful dog won’t find that comforting; the closer I get, the more they’ll wish I’d back off and leave them alone. Like a dog learning “leave it”, I have to stifle my impulsivity and grabbiness in favor of self-control and delayed gratification. It’s the paradoxical, zen-like truth that resisting something you want is the only way to reap the reward you seek! Until a dog tells me in no uncertain terms that she’s happy to see me and eager for contact, I don’t chance it. I can wait.

Hope was happy to learn behaviors and eat treats but never showed me any sign that she wanted to be touched. Because she was so slow to warm up, the shelter decided to transition her to a long-term foster arrangement where she’d play all day at an off-leash daycare facility and go home with its owner at night. This would allow her to adjust at her own pace to new people and experiences in the reassuring presence of other dogs.

Abi was adopted recently by a couple who were first time dog owners. Defying preconceived notions that only an experienced dog pro could handle the complexities of acclimatizing and socializing a former meat farm dog, this pair turned out to be a perfect match. They did extensive research, asked dozens of astute questions, and possessed uncanny instincts, reading Abi’s body language with ease and consistently intuiting what she needed to feel safe. They rearranged their work schedules so that one or both of them could be home with Abi for the entire first month. 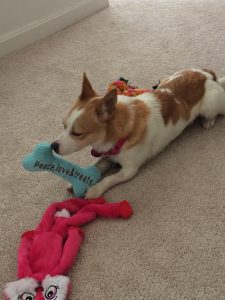 Two weeks after the adoption, I paid them all a visit for a behavior consult and check-in. This is Abi’s new life so far: She sits on mom’s and dad’s laps, sleeps in their bed, plays with toys, chews on bones, and, naturally, unlatches her crate and let herself out. She has mastered the three flights of stairs to her apartment, rides in the car with aplomb, and walks boldly on leash in the woods and near busy roads. In short, she’s a normal dog. She still flinches at quick movements and is wary of new people, but she’s pleasantly surprised everyone with her smooth transition to life on Easy Street. There’s every reason to expect that things will keep getting better.

What a tale these dogs could tell of their odyssey, their very own rags-to-riches American Dream. How much they’ve endured, and how far they’ve come. We’ll never know their history. Maybe what we imagine they suffered haunts us more than their actual past scarred them. Dogs indeed live in the moment. They tend to travel light, without baggage. They forgive and forget. They don’t dwell or brood or regret or blame. They move on, ready for whatever comes next. It’s their superpower. 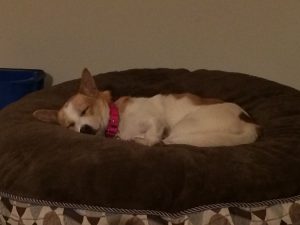