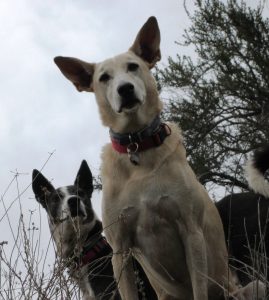 If we label our dogs, we instantly place them in a box, which can place restrictions and limitations on our interpretation of their character and abilities. Photo: Susan Nilson

Do you have a nickname for your dog? I mean, an endearing title or word that describes or captures who they are? This can often be a positive thing… all of my dogs, have a ‘second name’, that I often use to reference them… Sugar is ‘shu-shu’….. Punch is ‘P dog’… ‘Super’ aka suppy, dupey do, or do-do…. thriller… Girlie whirl…. you get the drift….

It’s so easy to label your dog with a phrase, word or characterisation… but what does it actually mean?

Whenever I deliver a seminar, regardless of the country, place or sport… I always ask people to tell me about their dog at the start of the day and as part of the introduction… Often you hear people describe their dogs with ‘labels’. Phrases or words that they feel capture who or what their dogs are.

But what do these ‘labels’ actually say and mean….

Labels are often the way we articulate how we feel about our dog, sometimes they are flattering… others times, not so much….

I’ve done it myself, I’ve described my own dogs by a word…. and the resulting affect can sometimes be more damaging then you may release.

Years ago I owned a red and white border collie, who was closely related to my first obedience dog. I look back now, and although I didn’t feel I had a case of second dog syndrome at the time, I most definitely did. Sometimes its hard to see the woods for all the trees.

Springa wasn’t a ‘natural’ obedience dog, and I labelled him as ‘stubborn and lazy’. To teach him anything was a chore…. he literally dug his heels in at the prospect of learning anything new. I look back now, and release that his ‘stubbornness’ was actually his way of saying he didn’t understand… and his motto being ‘if in doubt, do nowt!’

His stubbornness, wasn’t ‘stubbornness’, it was my lack of knowledge and understanding. It was the dog training ‘universe’ telling me to change, rather then be disappointed my dog didn’t conform.

I repeatedly described him as ‘not the brightest’, using him as a example of how difficult it was to teach a dog something new.

Again, looking back.. it was never about the dog. It often isn’t.

It was only when a series of circumstances, forced me to have to use ’Springa’ for some TV work. A good friend was working on the ‘Underdog Show’, a series where celebrities trained dogs each week. They needed a dog to do the links and short clips demonstrating what the tasks were each week. When she rang me up, I was in a dark place having lost two dogs in close succession, who were that brand of ‘special’ dogs that just had ‘it’.

The dogs I had ‘left’ were my young puppy Malinois, too young to do any of the tasks they had to do, and my older obedience dog, who was too old to do any of the tasks….. I was ‘left’ with ‘Springa’. I initially declined the job. I didn’t have a dog. I only had ‘Springa,’ who was in my mind incapable of doing any of it… or so I thought.

My friend forced my hand, and played the guilt card. She ‘NEEDED’ a dog to do this that day, the production team had sprung this on her last minute. She played the ‘friend’ card!

So I reluctantly took ‘Springa’.

He blew me away…. it made me realise that even though he may have been difficult to teach, he had learned so much information, that he had been taught to use his brain and as a result could pick up new things, string behaviours into chains he had never done before and was most importantly, impeccably behaved throughout.

The production team commented on Springa being a ‘genius’…. a canine ‘Einstein’…. I initially laughed at the thought, but when I stopped I acknowledged what the lesson was, I had a light bulb go off.

Springa might have been difficult to teach, because of my approach…. so rather then change my approach, I labelled him…but that wasn’t who he was now! I was holding onto the past….

I realised in that moment, how binding my labels had been, and how it affected my relationship with Springa.

When you label your dog, you instantly place your dog in a box. A box which has restrictions, which has boundaries and limitations.

This label is the way in which you describe your dog to your friends, peers and fellow trainers…. who will constantly ask you about your ‘lazy dog’, or rescue dog, or ‘stupid dog’ or ‘reactive’ dog….

Labels can also be the breed name… for example, ‘my cocker spaniel doesn’t come back because he loves to hunt and sniff’….’my beagle cant be be trained because, well he’s a beagle’…. ‘my Malinois can’t settle and wait patiently because he’s too high drive’….

Don’t get me wrong, knowing and acknowledging what you have is smart dog training. My dog is sensitive, my dog is aggressive, I own a high drive german shepherd from working lines…. thats not labelling, thats making a statement. But thats where the journey starts, not where it ends.

I have lost count of the number of people that have asked me ‘WHY did YOU get a BOXER!’…. as if it was an accident, or misjudgment on my part. My simple answer is, ‘I got a boxer because I like boxers’. Full stop. I don’t see the limitations that others clearly perceive the breed to have, I don’t see the definition of success as what my dog wins or doesn’t win. There was a point in Punch’s life where he may have never have walked normally let alone do any dog sports. If our relationship was based on MY goals and aspirations, I would have been sorely disappointed. I make the choice the have the dog, because first and foremost, I like the dog.

Discard labels and give your dog a title! Titles are owned, they are a indication or brilliance, of achievement and success….

The amazing thing about dog training is that the rules and principles don’t listen to the labels….. they merely focus on solutions….

Ditch your labels! Liberate your dog! 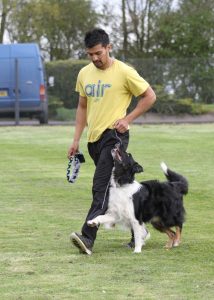 Head trainer and owner of East London Dog Training, Kamal Fernandez has over 20 years’ experience training dogs from all walks of life. He started training in 1991 after adopting Scrunch, an independent free-willed chow-chow mix who prompted a trip to Newham Dog Training Club at Eastlea School in London, England. Thus began an epic journey into the world of dog training which started with a dog that would not come back when called, to competing in the Obedience Championship at renowned UK dog show, Crufts.

Fernandez has immersed himself in the world of animal training, led by some of the ‘leading lights’ in the field such as Sylvia Bishop, Susan Garrett, Bob Bailey, Ian Dunbar and Karen Pryor. Now an internationally renowned seminar instructor, Fernandez has been invited to teach all over the world in countries such as Australia, New Zealand, Holland, Belgium and Germany.

Kamal Fernandez is also an instructor at Fenzi Dog Sports Academy and a Special Council Member of The Pet Professional Guild British Isles.