This article was written by Barb Levenson and first published in BARKS from the Guild, July 2014, pp. 24-26. 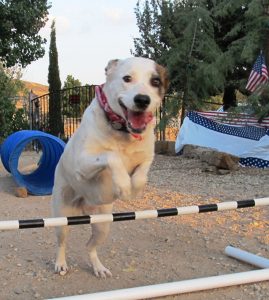 I was attending an agility trial recently and was sitting by the crating area massaging my dog. A couple sitting behind me had two Labradors, the older one their agility competition dog. This dog was allowed to be loose on his mat, unleashed and uncrated. I turned around to see him with his back to his owner and his nose in the rear of a nearby dog. The man called the dog two, three, four or more times. There was no response from the dog who kept on sniffing. The wife, annoyed (probably at her husband), got up, smacked the dog on the rear with a newspaper she was reading and yelled at him to get into his crate. The dog was surprised (me too) and shrank into his crate. I was appalled. I believe in a no-force/no hit methodology. I failed to understand what they thought they were teaching their dog. But what was the real problem here? The lack of a solid obedience foundation.

Three-day eventing is an interesting equestrian sport. In this discipline the horses are required to compete in three divisions – dressage, stadium jumping and cross country. The dressage is needed in order to control the horse through the jumping and cross country. I relate this to the dog sports in which I compete. We also have three similar venues – obedience/rally (dressage), jumping (stadium jumping) and standard agility courses (the cross country in equestrian sports). However, many times the obedience portion is lacking or totally missing. Sometimes the dogs cannot perform a quiet sit at the start line or will run around the ring with no real connection to the handler.

Most of the top agility competitors in both the US and the rest of the world add a strong element of obedience to their dog training but, unless you go looking for it, you will not see it. Strong world competitors such as Susan Garrett and Silvia Trkman are however known for adding obedience to their foundation work. Their dogs are in the habit of taking their cues from the handler, whether for close up obstacle work or distance handling. This builds up the partnership and the dogs are used to obtaining reinforcement for their responsiveness from their handler.

In my opinion, agility is not just about speed. It is about obedience to the handler while running at a full gallop – just as horses do in the jumping and cross country of three-day eventing. A great way to look at the training needed is with Susan Garrett’s acronym – DASH.

Note that speed only comes in the third position. Accuracy is the second most important element and that is your obedience. The dog must be accurate and true in his response to the handler’s cues. That cannot be done with speed. The dog must be able to think, i.e. become obedient and responsive to the cue before the drive and speed is added. Many people today believe it is all about speed and put this into the equation before the accuracy. They then wonder why the dog cannot perform. “He can do it at home,” is heard when they commiserate with their friends at the trial.

This is how I train my dogs for three-day eventing. First, all my dogs learn to work for all their meals until they are aged 14 – 18 months. I train using their breakfast, lunch (for puppies) and dinner in the house for laying the obedience, rally and agility foundations. I start in the house because I can control all the distractions, an important part of training my dogs. There are virtually no distractions when I am working with one of my dogs. All other dogs are somewhere else in the house. I’m building a reinforcement and relationship history with the individual dog and do not want any interference from other dogs.

D = Desire is achieved because all my dogs start out working for their dog food. I don’t use treats at home. The reason for this is the lack of distractions – treats will cover the distractions down the road. If I start with treats I have nowhere to go. I audited a Learning and Motivation class at the University of Pittsburgh and remember the professor suggested started with the lowest value food the animal will work for. Once the foundation is laid you can raise the value of the food as needed for the behavior.

My training consists entirely of games and reinforcement and I have not had a dog yet that did not want to eat his food. Should a dog tell me he does not want to eat/work he gets a kiss on the top of his head and all the food goes back into the bag. I will not reinforce a behavior I do not like and I will not bribe my dogs to eat/work. I use a high quality food and will not diminish the value of that food by begging the dog to eat with treats in it. Consequently, my dogs eat from the get-go.

A = Accuracy is accomplished by using meals to develop a consistent response to my cues. Before we go anywhere the dog is proficient in reading and understanding my cues. Also, my cues are clear, concise and consistent so the dog doesn’t have to guess what I am saying to him. Over the years I have developed hand, body or verbal cues for every behavior I will teach my dogs. I will usually start with a non-verbal cue and add the verbal later when the behavior is shaped. Regardless, I am sure before I move on that the dog is clear about the communication cue. It should not vary. That would be like adding a Chinese word for sit that I don’t understand. The three C’s are crucial as we teach our dogs.

Once my dog can read and respond to the cue in the house I move to my training building where I add additional accuracy with some distractions. Just the size and equipment in the building provides distractions, especially if I have started some preliminary work on those obstacles such as tunnels and the table.

S = Speed If the dog is accurate in the building I will then add the toy with which I have been shaping and building value separately. I am careful to add tremendous value to certain toys and will build them into this part of the training. For example, I can use tugging to reinforce ‘sit’ and ‘down stays’ as I go back to the dog, say “yes” and tell them to get the tug toy I am holding. And I use a tug as reinforcement for responding to my release word at the start line. I have also used balls to teach the puppy to drive out of a tunnel. They all fit into the mix to build drive, speed and enthusiasm for the particular exercise. I will even use tugging down the road for more advanced obedience exercises. Tugging raises the arousal level in preparation for shows.

H = Habitat Finally, in order to change the habitat, I select obedience and agility venues that allow me to train in the ring – ASCA for agility and USDAA CynoSport for rally/obedience. CynoSport even allows handlers to have food in the ring. What a great tool to have on you for your young, green dog. He will quickly learn that reinforcement is available – even in this very strange place.

In my opinion, all success is built upon the obedience foundation you provide for your dog. Without this understanding handlers have nowhere to go when the dog misbehaves. People smack, yell and blame the dog for misbehavior instead of asking for another behavior. If you have no obedience foundation and repertoire you have no place to go.
Equestrian sports are the foundation of many of our dog sports. Horse trainers here and around the world have moved from force training to horse whispering and obedience/dressage foundation both in English and Western classes. I believe they have it right. Watch a three-day event online. You will be amazed that so much can be accomplished on the back of a horse. And the beauty is that we do not have to know how to ride to train our dogs. We just have to know how to train.

To find out more about force-free training for dogs, visit the Pet Professional Guild’s inaugural educational Summit in Tampa, Florida on November 11-13, 2015.