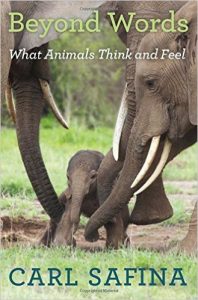 I read a lot of academic studies of dogs. My students often enjoy dissecting these studies and figuring out better ways to investigate the same questions. Oftentimes, their ideas come from their extensive observation of real dogs doing real dog things — with other dogs.

Researcher and writer Carl Safina makes this point convincingly and with regard to many more species than dogs. His wonderful book on animal communication and thought, Beyond Words: What Animals Think and Feel, gently skewers academics for some of absurdly human-centered studies and the equally absurd conclusions drawn from those studies. One example is the researchers who concluded that chimps lack theory of mind because they failed to understand that a photo of a man shivering next to an unplugged heater meant that the chimps should select a photo of a man next to a working heater. Huh?

Safina offers several definitions for theory of mind drawn from real studies. My favorite is the one that claims that theory of mind is the ability “to read the minds of others.” Hmmm. All the humans I know would fail that test. A good definition is “knowing that another can have thoughts that differ from yours.”

In Beyond Words, Safina describes many, many observations — his own and those of other respected ethologists — of non-humans showing that they meet this definition; the evidence, he says, is “blinding” (his emphasis). His discussion of the “mirror test” prompted my public apology to my dog, Jana. Safina also makes the valid point that studying how dogs (or chimps, dolphins, or any other species) are like humans is irrelevant; they exist as themselves and are better at reading, understanding, and interacting with members of their own species in ways that enhance their survival than at behaving like humans. So true. But I’d argue that for dogs, being able to read and understand humans is as important as understanding fellow dogs. And for people, understanding how dogs communicate with and understand fellow dogs is essential to our learning to understand dogs.

Safina pokes fun at a researcher who gathered and analyzed video of dogs playing for two years before reaching the somewhat obvious conclusion that when a dog wants to invite another dog to play, he behaves differently if the other dog is facing away from him: He tries to get that dog’s attention before offering a play bow. The dog either barks or uses his paw to attract the other dog’s attention. Dogs don’t play bow to other dogs’ rear ends. Amazing.

It’s only one example, but understanding these simple (and, arguably, obvious) points about how dogs communicate could improve humans’ communication with dogs: Get the dog’s attention and rely heavily on body language, rather than words.

Countless humans, at dog parks all over the world, try to get their dogs to do something (usually stop playing) by barking out orders at them from a distance of several feet while the dog is not only facing away from them but actively engaged in playing with other dogs. Humans do this when their dogs are chasing a toy or a squirrel, too. Verbal instruction is such a human-centered way to communicate to begin with … and it’s particularly ineffective if the dog (or person) isn’t paying attention.

The examples are myriad, but the point is the same: If we spend more time watching how dogs interact with each other and studying their communication, we’ll learn far more than if we focus on human-created, human-centered studies conducted in contrived environments.