Leaving Dogs in Cars Can Kill Them 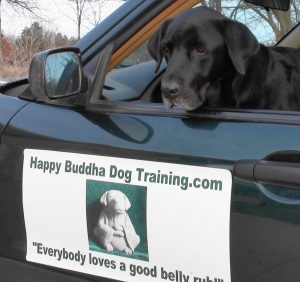 Like many dog owners, I enjoy taking Buddha and Gandhi in my car when I run chores.

They enjoy riding with me and have learned to recognize familiar locations such as the town dump, the bank, the vet clinic and even the local car wash. When I look around during those trips, I see others with dogs in their vehicles, too.

Cooler fall, winter and spring months make this practice fun and relatively safe, but summer months bring the risk of heat exhaustion and hyperthermia in dogs.

People can sweat freely to regulate body heat, but dogs have limited capacity to do so. They sweat (minimally) through their foot pads and can pant. Beyond that, they are subject to life-threatening heat buildup as rising temperatures exceed their capacity to dissipate heat.

And temperature rises quickly in parked vehicles, even after a few minutes. 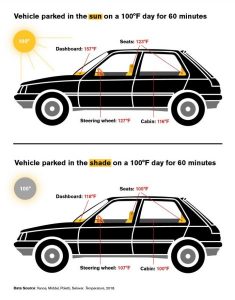 Arizona State University (ASU) recently studied how quickly hot cars become deadly for children. Researchers measured interior temperatures in vehicles parked in and out of shade, with the windows cracked open a couple of inches – which is typical of how pet owners leave dogs in parked vehicles.

Interior temperatures quickly reached 100 degrees, seats were measured at 105 degrees and dashboards peaked at 118. These temperatures can be reached in 60 minutes even at a moderate outside temperature of 72 degrees.

I used that information to gauge when it was safe for my dogs to remain unattended in my car. There was guesswork in estimation, so I also used a thermometer on several occasions until I saw a pattern I felt comfortable with as a responsible pet guardian. That established a benchmark my dogs and I can live with.

A five-minute trip to a gas station where I can park under a canopy on a 72-degree day is obviously far safer than on an 85-degree day with high humidity in full sunlight. But I suggest readers do their own experimenting and not rely upon mine to guide them.

It’s also worth noting that while the ASU study was 60 minutes, a car becomes dangerous far sooner than that for dogs. 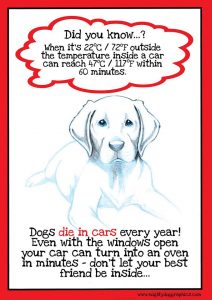 In a Facebook post, Ernie Ward, DVM filmed himself inside a car with the windows cracked open, as he showed a thermometer to the camera. The initial temperature was 95 degrees. Within 10 minutes, it reached 106, and by 30 minutes, the interior temperature was a deadly 116 degrees.

As the veterinarian stated, while drenched in sweat, he could cognitively understand what was happening and could simply open the door and save himself at any time. Dogs do not have that option.

If you leave a dog or see one that’s been in a car too long, look for some specific symptoms: panting, excessive drooling, reddened gums, small pinpoint areas of bleeding, muscle tremors and seizures, wobbly uncoordinated body movement and unconsciousness.

If you see these, it is a true medical emergency and immediate conveyance to a veterinary clinic or emergency hospital is required. There is no time to waste.

As a police officer, I often responded to (summer) calls when a concerned citizen reported a dog was left in a parked car. It frustrated me that there was no statute authorizing police to take any action in those situations. There was no guidance, nor any way for me to know whether the situation constituted an emergency. 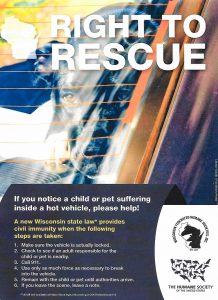 In 2015, the Wisconsin Legislature enacted section 895.484 of the statutes providing an exemption from civil liability for forcibly entering a vehicle under certain circumstances. It is known as the Right to Rescue law.
There are specific conditions which must be met.

There may be a similar law in your jurisdiction.  I encourage readers to understand the requirements before engaging in forced entry to a parked vehicle to rescue a pet.

Breaking into a vehicle to save an animal poses several problems.  The animal may be injured or frightened.  They may bite the rescuer, or escape and be struck by a vehicle or lost.  Even if none of those things occur, the animal would then be in a vehicle that can no longer be secured, so if they were not truly suffering a medical emergency a premature rescue attempt creates a serious problem.

If I encounter such a situation, my first choice is to notify local law enforcement and remain until they arrive. If you don’t clearly see the pet is suffering a true medical emergency, consider letting officials determine what needs to be done for the welfare of the animal.