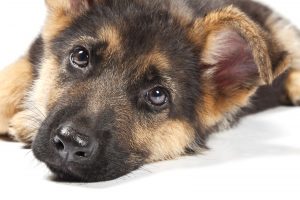 Later, my client told me what had happened that weekend. They had had guests, and Bogie had been whining and crying in his crate, so her husband used a shock collar to keep him quiet. Things suddenly became very clear. I now understood why Bogie’s progress was so sporadic. My client used positive reinforcement, but her husband was using fear, pain and punishment, and had been all along. It had escalated to Bogie being shocked in a crate, with no way for him to escape…My heart still hurts when I think about what Bogie endured. Fear was the overriding emotion in his short life: fear of the other dog in the family, other dogs in general, other people, and the world at large. Worst of all was fearing the person who was supposed to be his guardian and protector. Read article